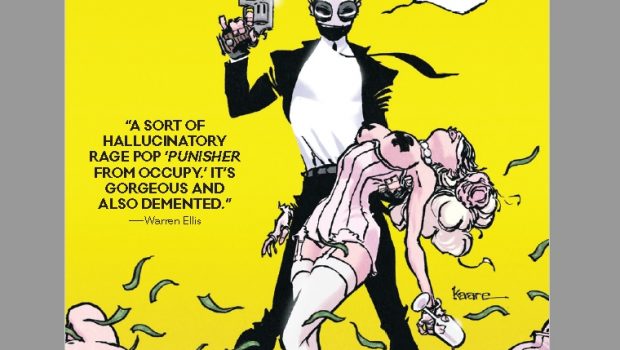 Summary: If Bruce Wayne had a bloodlust!

I don’t know that Renato Jones could have worked even a few years ago… sure the discontent with what the superwealthy, people in power were doing was growing… but I think now… now is when it really hits it’s mark. Renato Jones is “The Freelancer” a hitman who is taking out the superwealthy one by one (or many at a time… he’s not fussed). His identity is hidden by his simple mask (resembling somewhat a robot head with fly eyes), as we learn… he too is extremely wealthy but that doesn’t mean he thinks the same way as the one%. 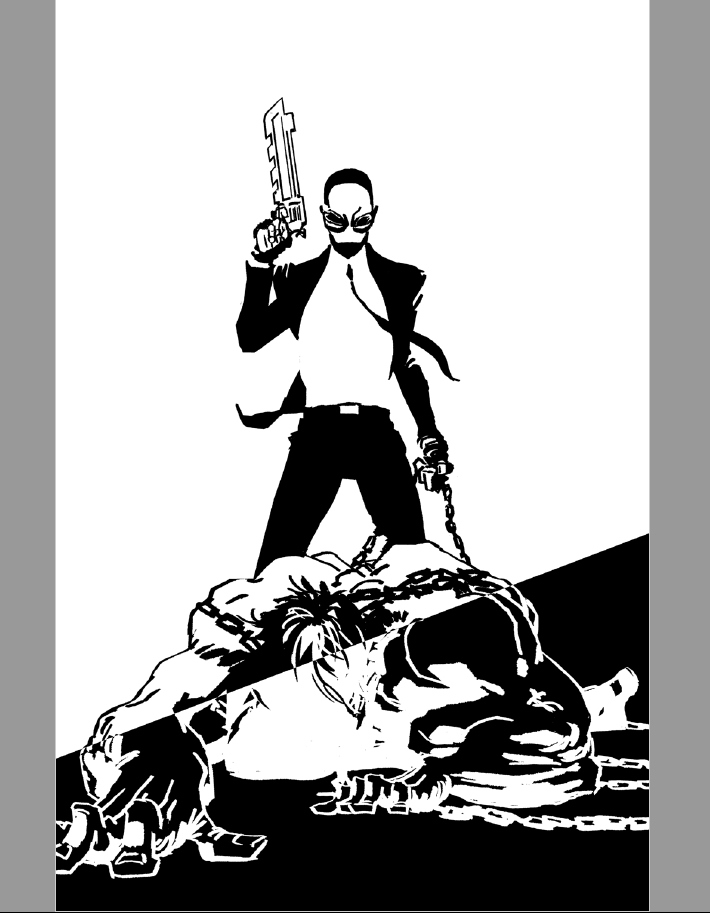 This is arguably Zeitgeist writing at its best… with the new president being sworn in Jan 20th and bringing with him many questions, concerns and frustrations… this comic seems very very relevant. With many people feeling disaffected, the idea of a Renato Jones running around doing what he does could almost seem appealing. The question comes down to what do you call justice? Do you think the Batman approach is right? Apprehending criminals (possibly with a significant degree of physical assault) and handing them over to the police. Or do you prefer the Renato Jones approach… no mercy, no second chances simply judge jury executioner? 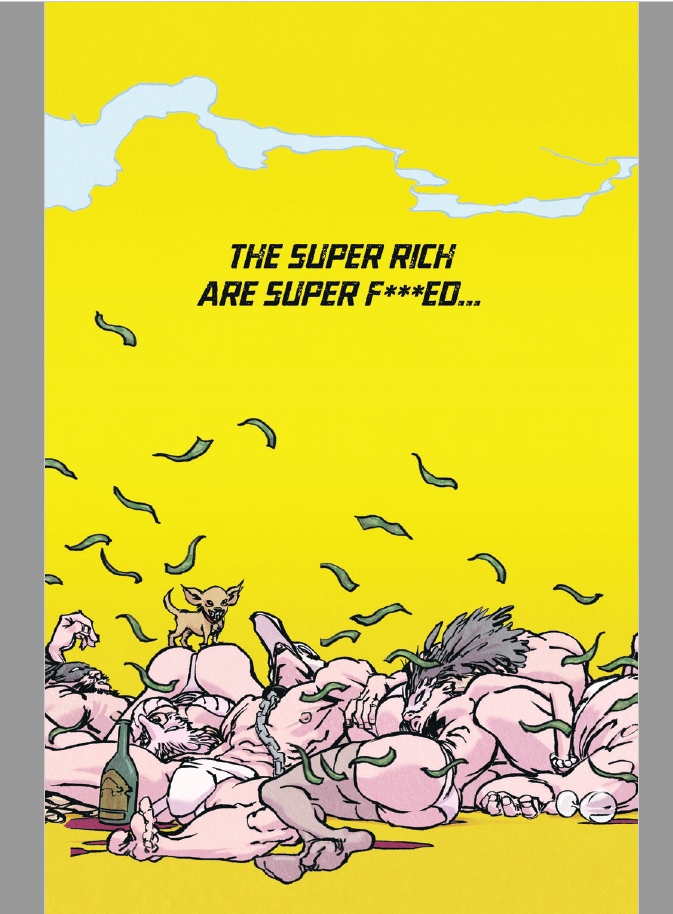 It would be hard to not think there may have been a bit of Frank Miller inspiration for some of the splash pages with their bold black and white use of positive and negative space. But we are also treated to some splash pages featuring full colour photos set out like fashion shoots or perfume ads. Then there are the pages between, the meat and veg of the comic and these are quite lovely. There’s a lovely use of colour and a great sense of lighting… but there is also a permanent sense of vitality… there’s an energy throughout. 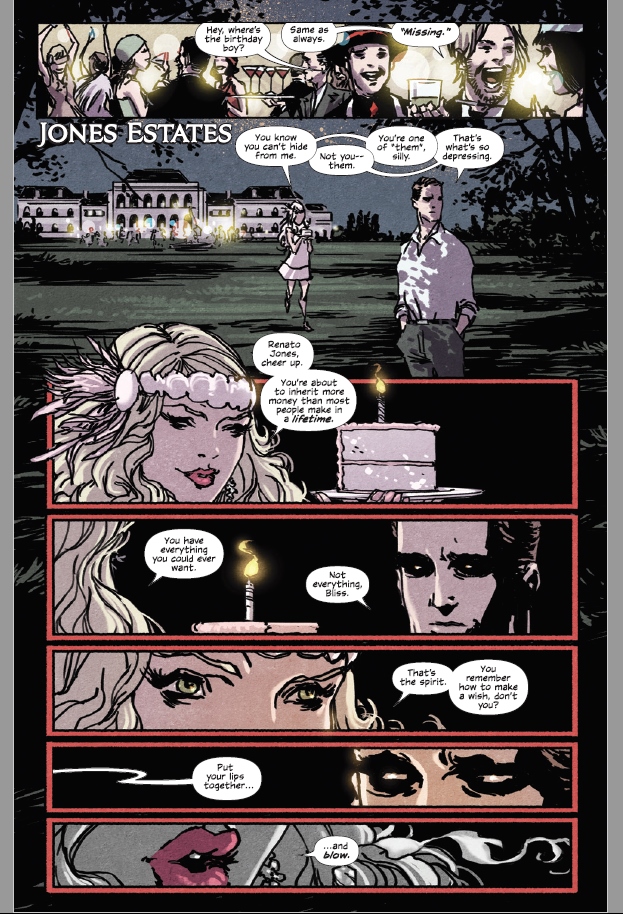 As mentioned… this really taps into that now well established sense of frustration at the elite… the rich, the powerful… the people who dictate our laws but who seem more interested in increasing their own personal interests than looking after those in need. It is also possible to see a certain hued individual in one of the characters which may impact how you view the story. Renato Jones really does come across as an alternate Batman… not focused on simply stamping out crime… but rather focused on ridding the world of the people who oppress others. Given the wealthy and powerful nature of the people Renato Jones deals with it is perhaps understandable that his only real course of action is to “remove” the targets he seeks… after all, it’s almost guaranteed they would simply use their power, their influence or simply their money to get out of any jail time they might be due. Quite possibly not for the squeamish or gentle stomached (there is one scene that even had me cringe with disgust at the actions implied), but there is a lot to enjoy here as an alternate fantasy reality… perhaps a little letting off of steam by proxy as well. I am interested to see where Renato and Bliss might go next. 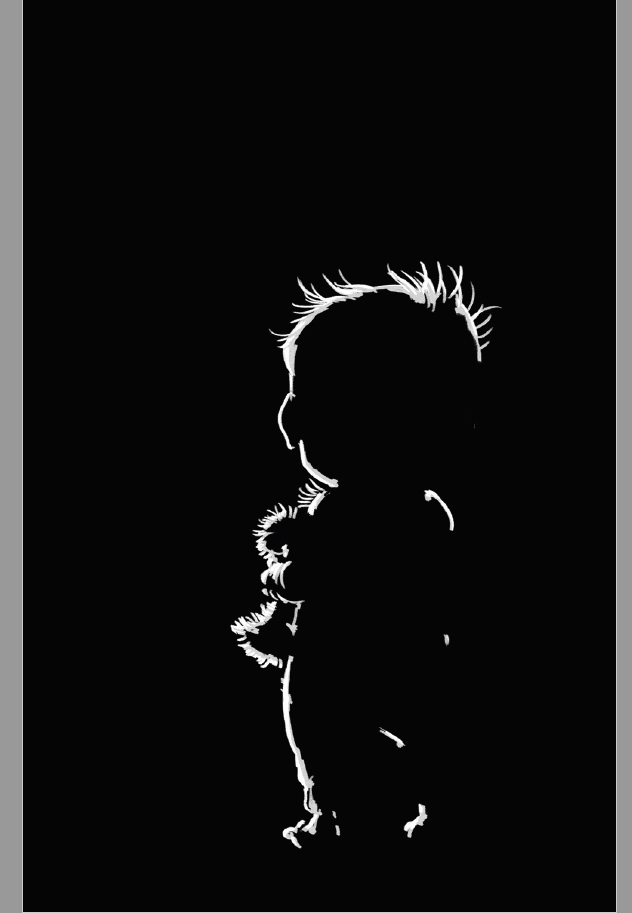