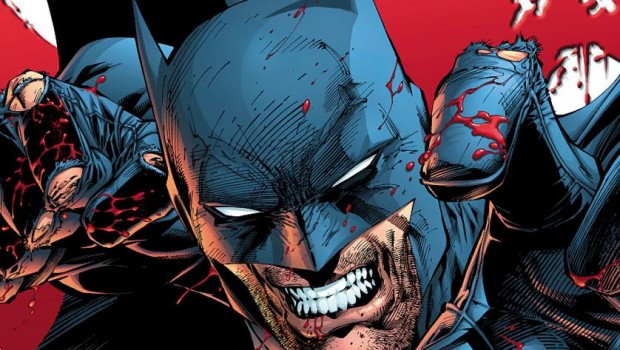 Summary: Five points about what makes All Star Batman & Robin so bad it's good.

Look back at the infamous All Star Batman & Robin

With the release of the image of the new Batmobile for the upcoming Batman Vs Superman: Dawn of Justice I thought I’d take another look at one of the most controversial and hated Batman stories that is coincidentally written by possible the best Batman writer of all time, step into the ring Mr Frank Miller. At some point Frank Miller was a brilliant artist and writer who along with other writers like Alan Moore helped to show that comics could tell complex and mature stories. His early output speaks for itself with Batman Year One, The Dark Knight Returns, 300, Sin City, Ronin, and Martha Washington.

A few years down the line he ended up writing the inane The Dark Knight Strikes Again, the openly bigoted piece of work Holy Terror, and All Star Batman & Robin. The latter tends to be the most hated of the bunch but there’s something good about how bad it is. Sort of like the comic book world’s answer to Plan 9 From Outer Space or the Room. This is the most bonkers comic book I’ve ever read in my life, nothing makes sense and it’s hard to take seriously. Yet that is why I like it, or maybe I’m some sort of sadomasochist that I enjoy this crap. But below are 5 reasons why All Star Goddamn Batman & Robin is soooooooo bad it’s good.

5) Black Canary is not only reduced to being eye candy for readers but also is turned on by the site of the Goddamn Batman beating up, crippling and possibly killing criminals. They then have sex in the alleyway among the bodies of said criminals whilst the Goddamn Batman remarks about how they keep the masks on because it’s better that way because…that’s how romance works in the mind of Frank Miller and I hope one day he decides to remake The Notebook his way since it would at least make that film a bit more tolerable.

Also during said beat down of criminals Batman throws the weirdest and possibly gayest insults, such as calling the criminals “suckers” and “boy of mine.” So next time you want to sound intimidating to a hardened criminal snatching your wallet you fight back and call them honey bunny or cupcake. Also the guy he says “this is hurt” to looks a bit like John Hurt. Just saying. 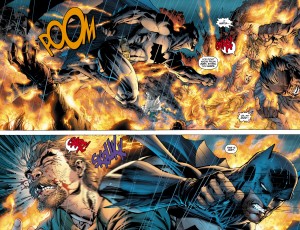 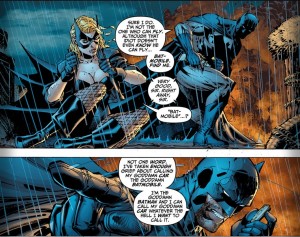 3) Wonder Woman is portrayed as a man hating and implied lesbian who hates men tot he point she refers to them as “sperm bank” and derides the other members of the Justice League as wimps for refusing to kill the Goddamn Batman. I’m guessing this is crazy Frank’s method of writing a positive female character since the rest are just ultimately his masturbatory fantasies being drawn by Jim Lee, more on Frank’s masturbatory fantasy women coming up. Given the man has always been accused of misogyny for his portrayal of female characters minus Martha Washington I’m assuming he was aiming to rectify this. Yet it backfires completely given that after getting beaten up by Superman she just randomly begins making out with him. Turns out beneath her man hating ways she just wanted a man to set her straight, literally. Welcome to Frank’s rendition of classic heroine Wonder Woman. 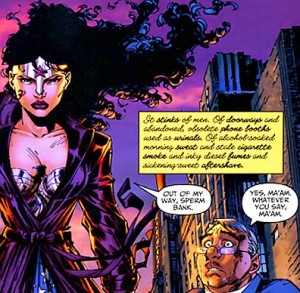 2) The reduction of female characters into just being sex objects and eye candy. No artwork needed, Miller manages the nearly impossible feat of sexualising a character during the scripting process and Vick Vale’s bottom seams to speak. 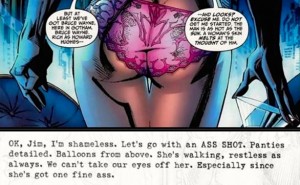 And since when do journalists or writers strut around the house in their underwear dictating what they plan to write in front of a window where everyone can see you? Logic takes another loss  to the insane world of All Star Batman & Robin. How nice of Miller to assume the reader is a 13 year old horn dog who gets off to the image of drawn females, how nice of him to enforce the stereotype that most people who read comics are like that as shown by his script. Vicki Vale is reduced to becoming a talking butt. 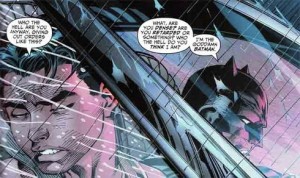 Just imagine Christian Bale having to deliver this in his Bat voice and it becomes even more laughable. This is why I strangely like All Star Batman & Robin in all its stupidity and these 5 points are just the tip of the iceberg. Other dishonorable mentions go to a depressed non smiling Joker, Batgirl swearing all the time, repetitive dialogue, Batman seemingly killing criminals, Batman seemingly killing cops. If that doesn’t convince you to give All Star Batman & Robin a try I don’t know what will.