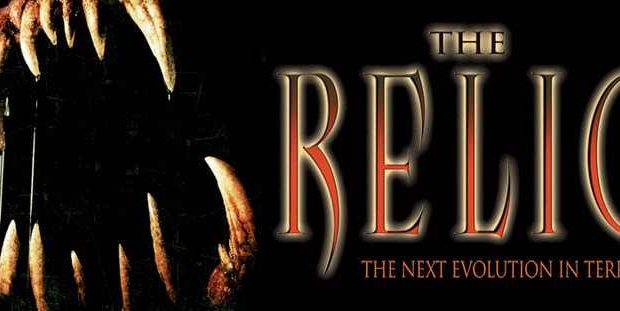 Summary: Monstrous mayhem in the Museum! Old school monster fun as a monstrous medley takes on the best brains of Chicago.

As much as its titular monster is an amalgam of different creatures, The Relic is an entertaining mashup of old school monster movie, lashed to the modern interest in gore and savagery. Based on a book by Douglas Preston and Lincoln Child, The Relic is itself a child of the 1990s, with its fashion straight out of a Nirvana music video clip and some old-school wonderful practical effects (and some pretty good though limited CGI), The Relic is a fun romp that will take you for an entertaining ride along its entire running time.

Anthropologist/archaeologist Dr John Whitney finds himself in cahoots with an indigenous tribe in the Amazon. Forced to drink a local concoction, he flees and sneaks aboard a boat back to the US. When the ship is found drifting off the Chicago sure, local police, headed by Lieutenant Vincent D’Agosta (Tom Sizemore) find a charnel house of decapitated crew members – and no Doctor Whitney.

At the Chicago Museum of Natural History, geneticist (and, unusually, lead) Doctor Margo Green (Penelope Ann Miller) prepares for a fundraising bash while fighting for additional research funds. She comes across a shipment from Dr Whitney that includes a hideous Amazonian stone idol, and some leaves impregnated with a suspicious biological substance.

The substance rewrites DNA, enabling different organisms to combine into a sort of chimera – in this instance a brain eating oversized gecko with insectile features. Having escaped the slaughter on the ship, it has crawled through underground tunnels into the bowels of the museum, and the upcoming fundraiser promises a veritable smorgasbord of human brains.

When a computer failure triggers a lockdown, trapping the fundraiser attendees, it is up to Lietenant D’Agosta and Doctor Green to lead the suvivors of the monster’s rampage to safety and find a way to defeat it before it escapes into the world.

The Relic is good old fashioned fun, though if you don’t like seeing people decapitated, perhaps looking away at key moments will cure the viewer of that affliction. It handles the build up of tension nicely, as the elements of the story: D’Agosta, Doctor Green, the fundraiser and the monster, all coalesce into a fantastic sequence where the panciked hordes effectively destroy the new exhibit in their panic to escape, and as they are picked off by the monster.

Sizemore and Miller (who is fantastic in Carlito’s Way) both handle relatively bland characters well. Sizemore is like a bull at the gate, while the more cerebral Miller battles conniving colleagues and a genuine intellectual puzzle to work together to beat the chimera. The other supporting characters are more one note, but in a movie such as this, it is the action, the tension and the payoff that are the real motivating forces.

The practical effects are astounding. Industry legend Stan Winston has done remarkable work bringing the chimera to life. It moves effortlessly and with clever editing, doesn’t look out of place. It’s only with the CGI that the visuals are let down, a little. The end scene looks particularly fake, for all the awesomeness of the fire, but overall, for reasonably early use of CGI, the monster comes across well.

This is the perfect movie to pop on the blu-ray in the dead of night or a rainy Sunday afternoon. There’s some humour, some effective tension and frights, and for the gore hounds, some wonderfully grotesque beheadings. The only downer is the lack of any extras whatsoever, unless the Scene Selection is your thing…