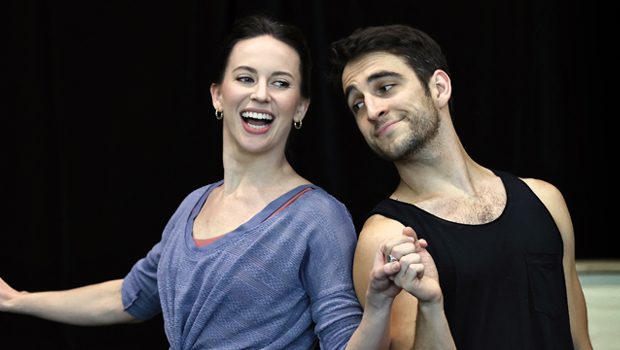 The world’s most famous nanny has flown into Sydney as rehearsals have officially begun for the Australian premiere of Cameron Mackintosh and Disney’s new production of MARY POPPINS.

Energy was high as the 44-strong company laced up their tap shoes and took to the floor in preparation for the first performance at Sydney Lyric Theatre on 15 May 2022.

With a spectacular reimagined set, delightful new costumes, and additional songs, critics all over the globe agree this brand-new production of MARY POPPINS is ‘practically perfect in every way’.

Stefanie Jones, who stars as Mary Poppins, shared her excitement about starting rehearsals: “The process of becoming Mary Poppins feels so much more real now that I am in the room with such a fabulous group of performers. It’s a privilege to work alongside some of the most talented people in Australia – and to ‘step in time’ with them for such iconic dance numbers to some of the world’s most loved music is a thrill!”

Minister for Tourism Stuart Ayres said that the NSW Government, through its tourism and major event agency Destination NSW, is proud to support Disney and Cameron Mackintosh’s superb new production.

“Mary Poppins is sure to delight and enchant all those who attend this fantastic production. It’s a must-see for visitors and Sydneysiders alike,” Mr Ayres said. “We are doing all we can to revitalise the visitor economy. The world-famous magical Nanny is a fan favourite and will be hugely popular, helping to revive our arts and entertainment sectors. The NSW Government has a strategy to become the cultural and events capital of the Asia Pacific. We are focused on attracting world-class stage shows like Mary Poppins, which provide jobs and supports our arts sector. I encourage all theatre lovers to book their tickets and head to the stage to enjoy this magical performance.”

MARY POPPINS is now on sale, with tickets available at MaryPoppinsMusical.com.au for performances through to 31 July 2022.

Seen by tens of millions of people worldwide, the original Tony and Olivier Award-winning production was hugely successful in Australia, breaking box office records and winning a record-breaking eight Helpmann Awards. Now, a new generation of theatregoers have the chance to experience this magical stage adaptation of the wonderful stories by Australian author PL Travers.

The original music and lyrics by Richard M. Sherman and Robert B. Sherman include the classic songs Jolly Holiday, Step in Time, Feed the Birds and Supercalifragilisticexpialidocious. New songs and additional music are by the Olivier Award-winning British team of George Stiles and Anthony Drewe. Book is by Academy Award®-winning screenwriter and Downton Abbey creator Julian Fellowes, and this production is co-created by Cameron Mackintosh. The producer for Disney Theatrical Productions is Thomas Schumacher.

Tickets are currently available for performances to 31 July 2022.
For more ticketing information including a schedule of performances, please visit
marypoppinsmusical.com.au.