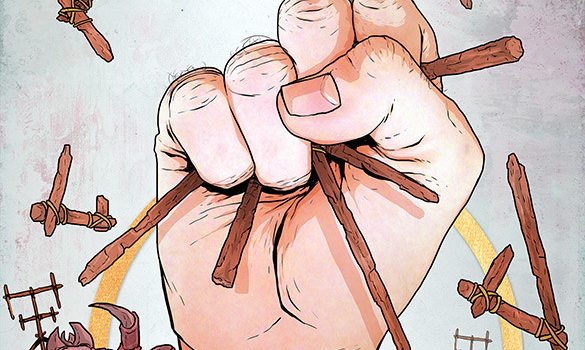 Summary: The epic conclusion to Regression is a must read.

Regression #15 is the final issue in Cullen Bunn’s horror themed series.  Adrain’s long journey, that began with past life regression therapy to get to the bottom of some horrible nightmares is finally coming to a close.  As the series progressed it was shown that the nightmares were all too real, and that a demonic force, the Valgeroti was behind it all.  This issue concludes it all. 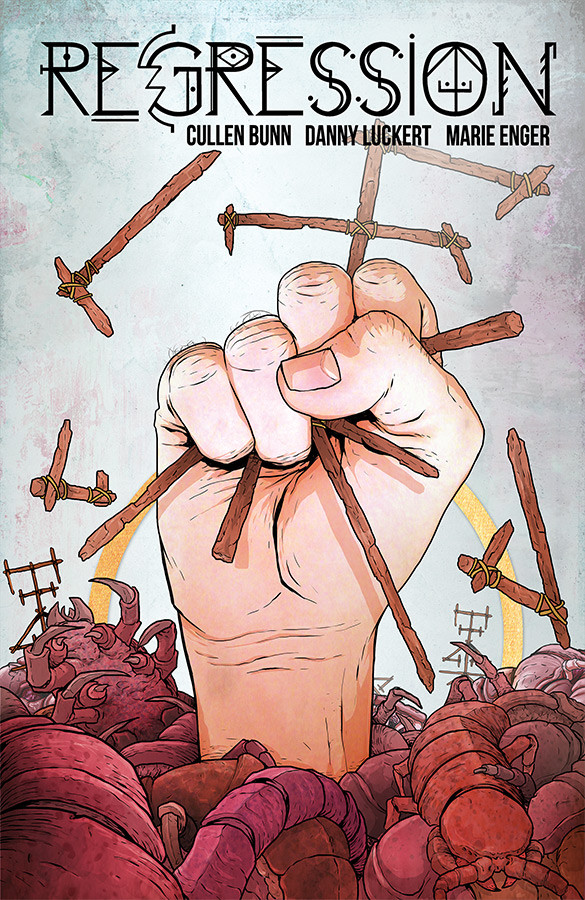 The cover features a clenched fist bursting out of a pile of dead Valgeroti demons.  Sticking out from between fingers are several sticks, as it appears the fist is crushing a symbol of the demon.  This shows the progression of the series, as at first Adrian was being consumed by the demons, and now he is finally breaking free.  This is a really neat looking cover, and features a lot of the symbolism of the series, while also providing one solid image to sum the issue up. 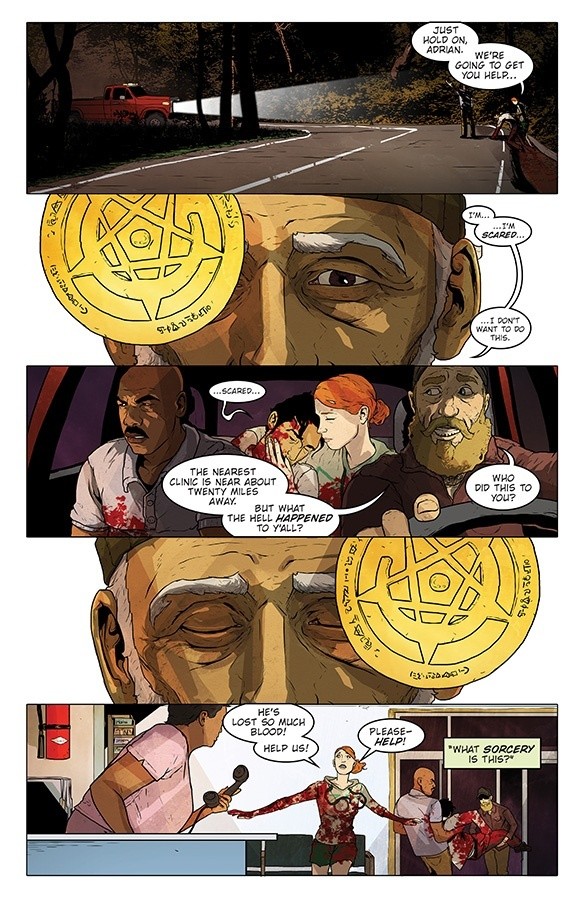 Danny Luckert and Marie Enger handle the art and colours respectively.  This issue is incredibly well drawn.  Luckert does a great job in showing a wide range of emotions across the faces of the characters in this book.  Fear, worry, sorrow, triumph.  All of these emotions are clearly placed across the faces of this story, and each done in an excellent manner.  When the demon does appear, it is inhuman.  A mix of human and insect and thoroughly grotesque.

The colouring adds to and enhances the art.  Marie Enger uses a wide variety of colours, and unlike many horror themed books, uses a wide variety of brighter colours.  This subverts expectations in a way, and adds a little bit more to the impact of the story.  Blood also sticks out differently, as though a different program or form of texturing is used.  It draws the eye in and looks amazing. 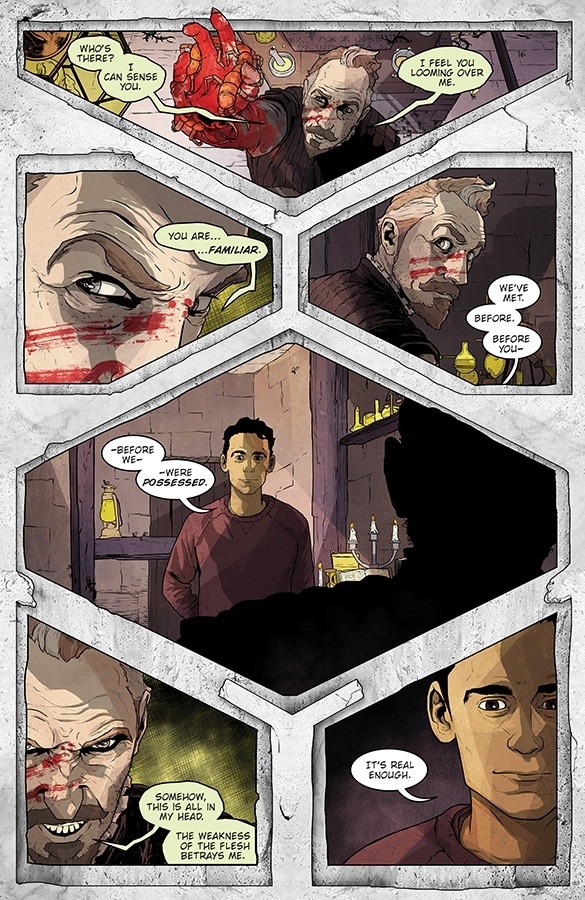 Cullen Bunn ends this issue with a bang.  Even for someone that has never read this story before, it is engaging, well paced, and well written.  The book begins with Adrian being taken to the hospital.  In the process he passes out and we are taken to a scene of Sutter and a representation of the Valgeroti sparring verbally, locked deep in his mind.  At the end of their conversation we are catapulted into the future, where Adrian’s allies from the past are still with him.  As the issue continues on Adrian is betrayed, and finally comes to a realization of how to defeat the Valgeroti.  The ending is pretty neat, and feels like an organic progression of the whole issue, if not the whole story. 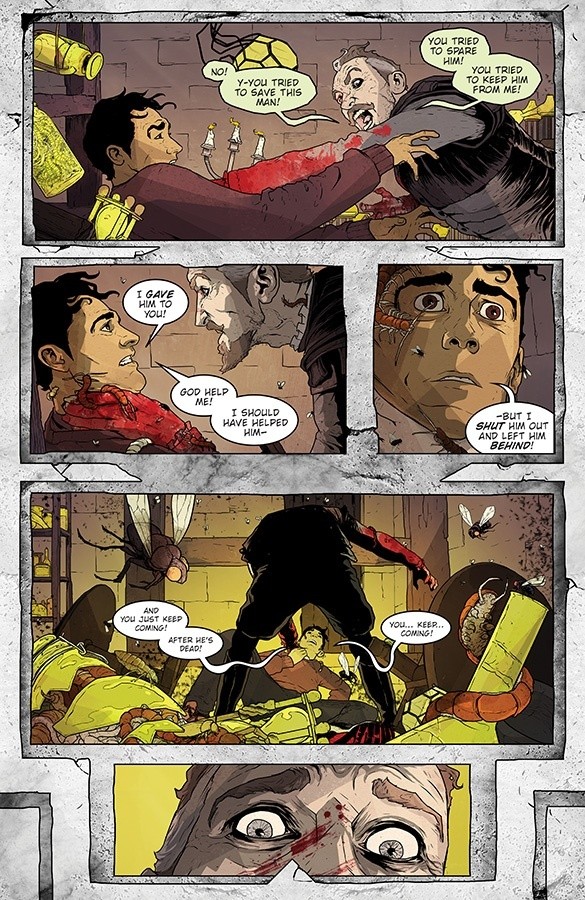 Although I wasn’t familiar with this series before picking up this issue, I did do a bit of reading on what it was about prior to reading it.  This book instantly turned me into a fan.  The story was well paced. It jumped from time period to time period in a logical progression to move the narrative forward. Using this to build to a great conclusion.

The art was excellent.  It did a great job of supporting and fleshing out the story, and towards the end really cranked up the tension as the book exploded into its finale.  The way the final confrontation in particular is drawn is fantastic.  It feels like quick cuts from an action movie, trying to rapidly and in great detail show the scope of what is going down.

This is a fantastic book. If you’re uneasy about jumping in here, make sure to go and check out the trades to get caught up.  For the depth of the storytelling and the quality of the art it will be well worth your time.

The epic conclusion to Regression is a must read. 5 out of 5 stars!