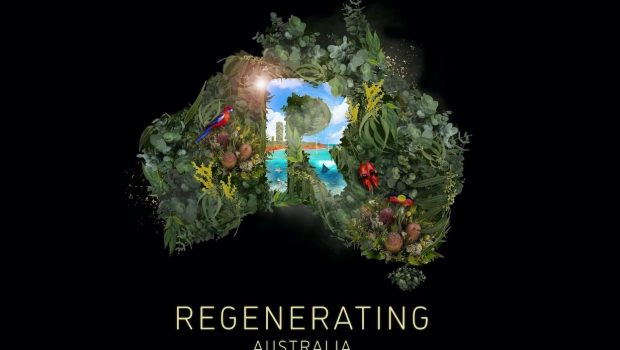 The hit 2015 documentary That Sugar Film saw Gameau transform himself into a ‘human lab rat’ to trial the effects of a high sugar diet on the human body. The film received widespread critical acclaim and at the time became the most successful Australian documentary ever released at the cinema. His next film, 2040, explored what the future could look like if we embraced the best available solutions to improve our planet, inspiring audiences around the world to act for a better future and raising millions of dollars to support climate solutions.

Featuring Kerry O’Brien, Sandra Sully, Gorgi Coghlan, Tim Flannery, David Pocock and other well-known voices, REGENERATING AUSTRALIA follows on from solutions explored in 2040 and, with another unique format, asks the question, ‘What would Australia look like by 2030 if we simply listened to the needs of its people?’ Based on a four-month interview process with Australians from all walks of life who shared their hopes and dreams for the country’s future, it is a new story for our nation: a story of empowerment. A story of solutions. A story of regeneration.

Produced in partnership with WWF-Australia, the film is set on New Year’s Eve 2029 and takes the form of a news bulletin looking back at the decade ‘that could be’. A decade that saw Australia transition to a fairer, cleaner, more community-focused economy. We see greener, more vibrant cities and communities; what a high-speed rail network connecting regional areas and cities would look like; the environmental and social effects of large-scale wind, solar, battery and hydrogen projects; and the impacts of landscapes coming to life when regenerative agriculture and reforestation programs combine with First Nations knowledge and fire ecology to bring more people back onto the land.

In conjunction with the film’s release, WWF-Australia is launching an ‘Innovate to Regenerate’ challenge, providing $2 million in seed funding to help local communities, innovators and experts to ‘bring the film to life’ and establish or scale up innovative solutions that reverse environmental damage and help humans live in harmony with nature.

REGENERATING AUSTRALIA will premiere in Sydney on Friday, March 4 at the Sunset Cinema in North Sydney and on Sunday, March 6 at the Meet Market in North Melbourne. Gameau will then embark on a nation-wide series of special Q&A events in capital cities and regional towns to discuss the film and opportunities for communities to access support via the campaign. All screenings will feature an audience Q&A with expert panelists and live entertainment from local artists. Tickets will be free for under 18s and all revenue from adult ticket sales will go direct to participating First Nations speakers and local artists.

Screening information and tickets are available at www.regeneratingaustralia.com/see-the-film.

Damon Gameau of Regen Studios says, “After a traumatic two years for many Australians, this film and these special event screenings provide some much-needed inspiration and optimism for what could be achieved in the years ahead. It will be an uplifting night of music, film and robust conversation about the future of this country.”