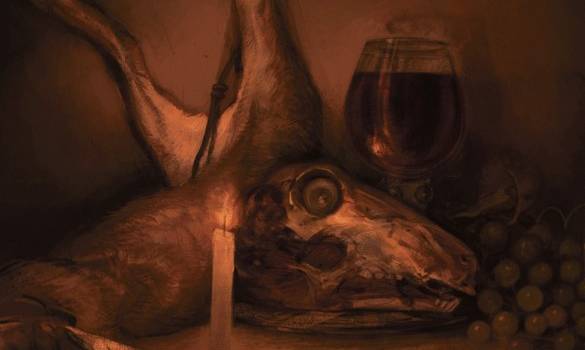 Summary: An intense end to the first story arc.

Bridget and Casper continue to investigate the cold case of Nancy Montgomery, which takes them to the Southern Sex Strip. Unearthing confronting and disturbing facts about this case ignites a fierce and fiery rage within Bridget. 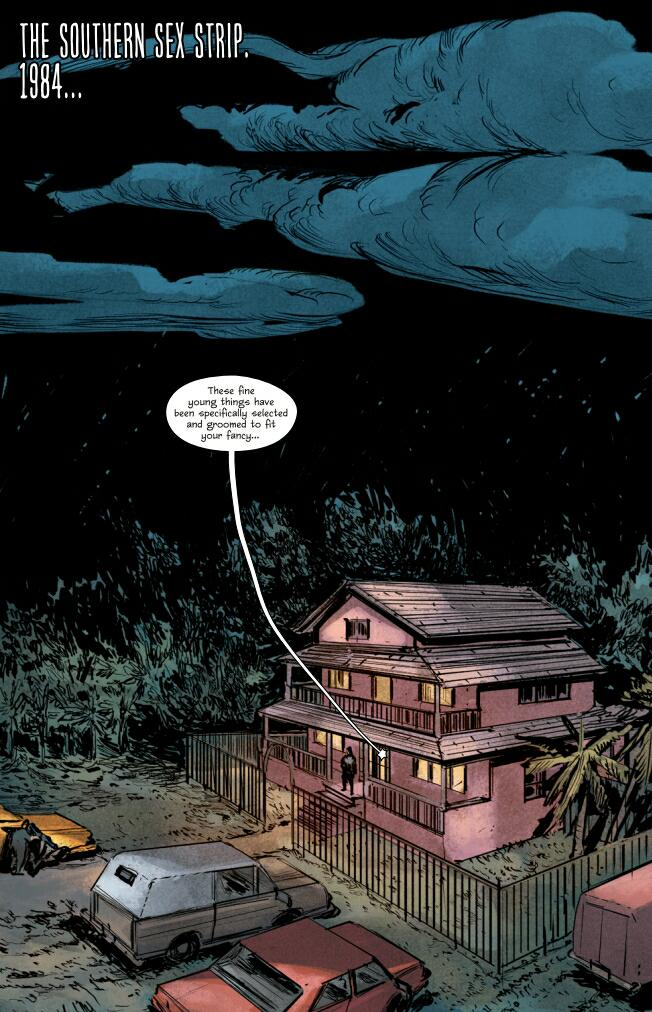 This issue begins at the Sparkletown brothel on the Southern Sex Strip back in 1984. Women are lined-up and presented like objects for purchase for a customer to inspect. The customer – a bloated and grotesque man – immediately takes a fancy to the youngest girl in the line-up. Her name is Nancy and a look of fear grips her innocent face when he singles her out. He quickly make it known to her that he intends to be rough and take his time, cementing her fear and sense of dread.

We then jump to the present, where we see Bridget and Casper at the Southern Sex Strip investigating Nancy’s cold case. They make their way to a local diner, where they question a woman who used to work with Nancy at Sparkletown, a notorious brothel where women worked as sex slaves and were regularly abused. The woman informs them that Nancy is dead, as she was killed after trying to escape. She mentions that her husband, a man named Teddy Johnson, might know some information about Nancy, as he used to be a regular customer at Sparkletown back in the day. They then make their way to Ted’s house, where they wish to question him about what he knows about Nancy. Once at the house, things quickly escalate taking a dramatic and unexpected turn. 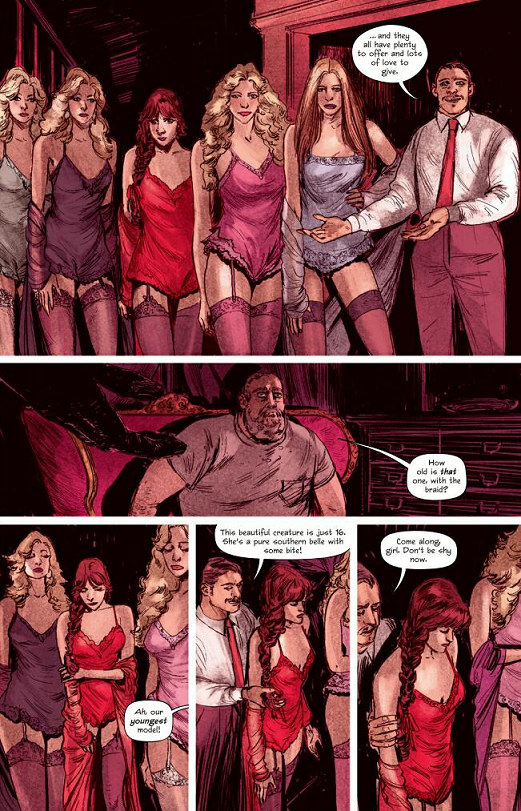 This is a dark, confronting and revealing issue of Redlands, delving deeper into Nancy’s past as a victim of sexual servitude at Sparkletown. The story is venturing into a very dark and disturbing place, revealing tragic glimpses into Nancy’s past. As we know, Bridget has allowed the spirit of Nancy to possess her until she has fulfilled her revenge on her father, who sold her as a sex slave. I find that the possession of Bridget offers an interesting dynamic in the narrative, as we are quite literally seeing a dead woman investigate her own murder. I’m curious to see what will unfold when Nancy finds her father and enacts her revenge, as I can only imagine that it’s going to be quite confronting. I also really enjoy the noir-style storytelling, which combines contemporary dark fiction and magical realism within a detective and crime genre. It all comes together to form an engaging and compelling narrative that I find is harrowing to read. I applaud Jordie Bellaire for writing such a gripping and heart-breaking story that doesn’t shy from being provocative and confronting. 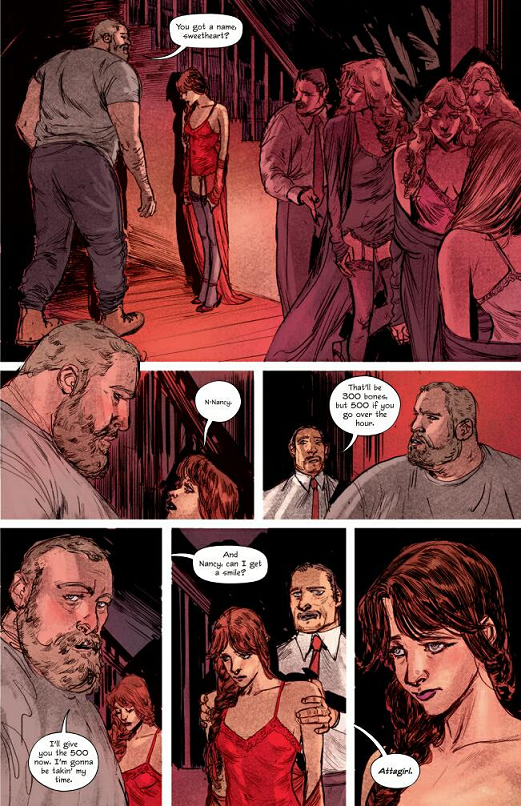 The art by Vanesa Del Rey embraces the highly emotional content of the writing. Nancy’s sorrowful face when she is selected in the line-up is so heartbreaking to see. She looks like a girl robbed of her innocence and tormented by a deep melancholy. I found that image of her face to be very striking and incredibly poignant. The linework is detailed and gives everything a wonderful sense of texture, with a somewhat rough and gritty appearance. The colouring is atmospheric and works well alongside the art in helping to heighten the ambiance of some of the more intense scenes, through the use of a fiery and vibrant colour palette.

Overall, I have thoroughly enjoyed the end to the first story arc, finding it to be an incredibly moving and provocative end to this chapter. This is a powerhouse team of creatives and I’m looking forward to Redlands return later in the year! 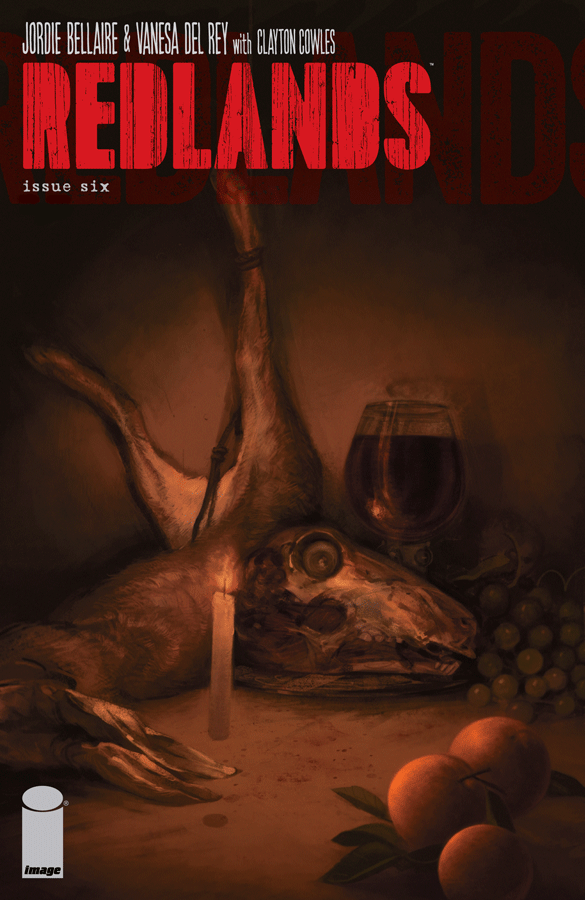