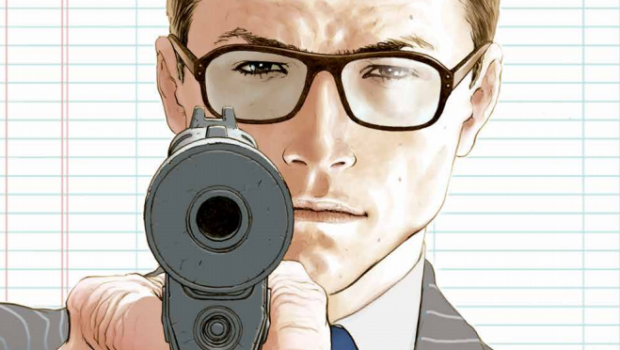 Summary: An exciting and enjoyable introduction to this new story arc.

The sequel we’ve been waiting for is finally here! From the world created by Mark Millar and Dave Gibbons, comes Kingsman: The Red Diamond, penned by Rob Williams, with art by Simon Fraser. The rough diamond, Eggsy, is back and he sure does pack a punch…quite literally! 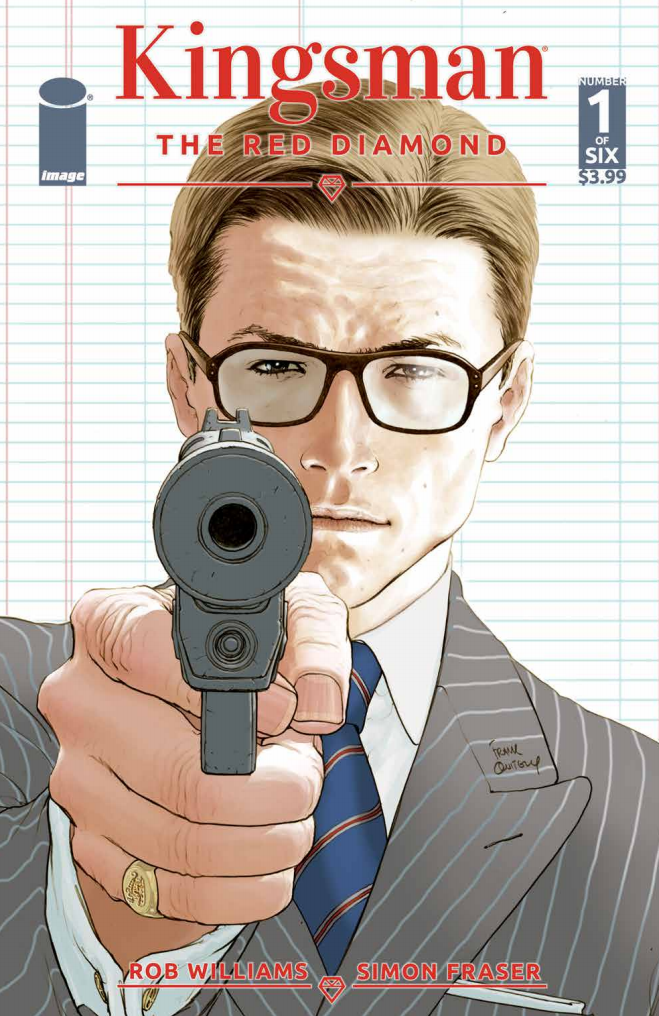 We begin this issue in Kensington, London, where we see Kingsman agent, Eggsy, heading out on a “hot date” with a rather attractive friend. His night abruptly comes to an end, when he pulls over to grab some cash and is interrupted by Sir Giles who promptly fills him in on the details of an emergency. A Greek terrorist group has kidnapped Prince Phillip and have threatened to behead him, unless the IMF immediately wipe the Greek National Debt…holy heck! With time of the essence, Eggsy quickly departs, via the highspeed underground tunnel, leaving a very disappointed date behind. Car flying and guns blazing, he surprises the terrorists with a very dramatic entrance, whereby he decimates the terrorists by showering them with explosives. Prince Phillip is safe but after a mouthy exchange, Eggsy foolishly biffs Phillip in the chops…not the wisest choice he’s made. So, after this rather unfortunate debacle, Sir Giles is forced to make Eggsy take a leave of absence. The timing however, could not be worse, as an international terror plot literally bubbles under the surface, and with Eggsy on holidays, how is he to know of the impending storm that is about to come? 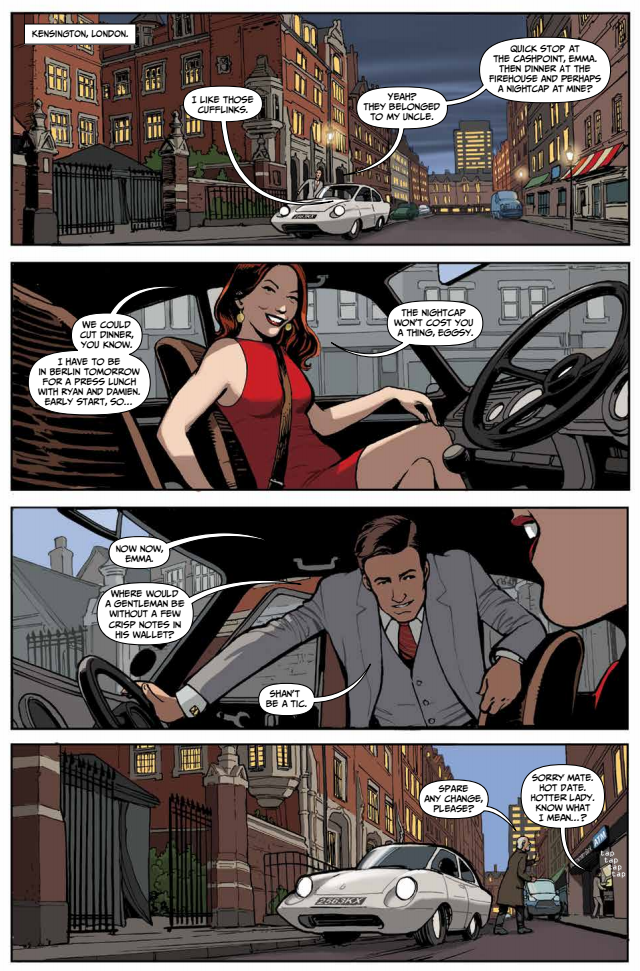 I’ve got to say, it’s great to have Eggsy back. I’m rather fond of this snappy dressing, foul-mouthed “gentleman” spy. He really is one of my favourite secret agents, as I’ve always enjoyed the polarising and opposing nature of his personality. This is the first time we see Rob Williams take over, as he is passed the helm from Mark Millar. Going into this, I was curious to see how the introduction of a new writer would work, and whether the narrative would sill possess the edgy tone that made the previous story arc so compelling. Well, I’m pleased to say that I believe Williams has captured the true essence of Eggsy, with all of his wonderful imperfections and witty banter. This to me was a good start, with all of the laugh-out-loud moments, dramatic action sequences and compelling plot devices that we’ve come to expect.

I also thought that it was clever and interesting to bring up the fact that Eggsy hasn’t really dealt with his grief of losing Uncle Jack. Instead, he’s immersed himself in his work, doing missions and raking around town, which of course only provides a temporary “fix”. I also enjoy seeing topical events mentioned in the background, as it makes these characters feel more believable, cementing this story in our world. We also got a glimpse of the new villain, The Red Diamond, and I’m rather intrigued by the mysterious fella and his plot to make the world a place of substance again. 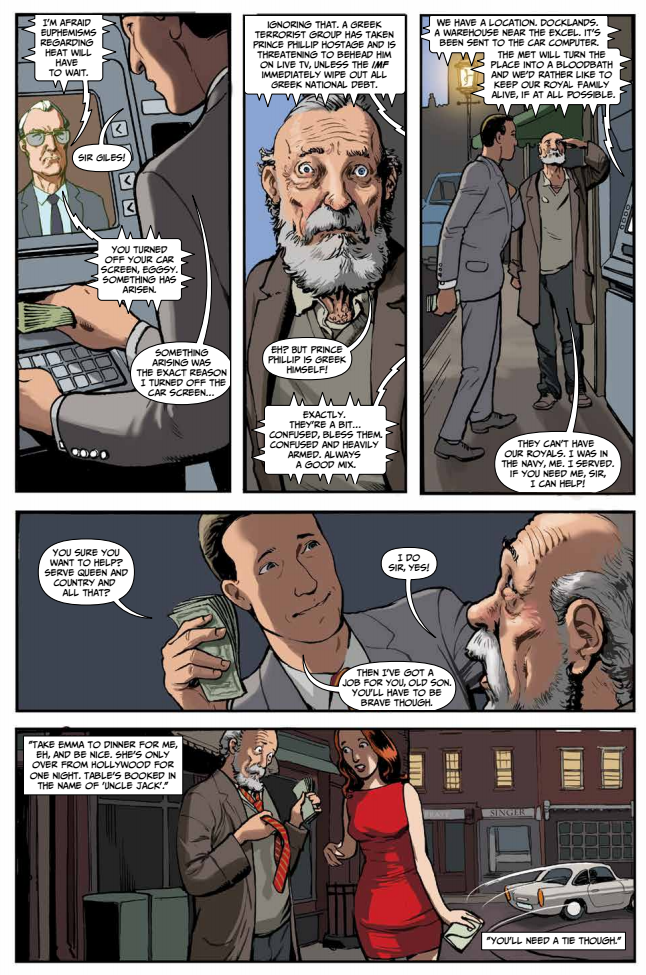 Simon Fraser brings this story to life with his engaging and animated illustrations. Taking over from Dave Gibbons, Fraser has reimagined these characters in his own unique way, using his personal style to shape the way they look, however, they still remain familiar and look like the characters we’ve come to know. I believe Eggsy looks a little more like he does in the movies, but I’m totally fine with that. Fraser does a wonderful job at capturing the emotions of everyone, through the detailed expressions and facial nuances. I particularly loved the pure rage that we see on Prince Phillip’s face when he is tied up and gagged. That was a special moment and it gave me a good ol’ chuckle. There is also a sense of energy and movement on each page, and everything appears to flow in a clean and effortless way. The colouring, by Gary Caldwell, does the job in creating a realistic tonal palette. Light and textures are effectively achieved, helping to frame everything a believable tone. The colouring also helps to reinforce the sense of depth that we see created through the use of light and shadows. 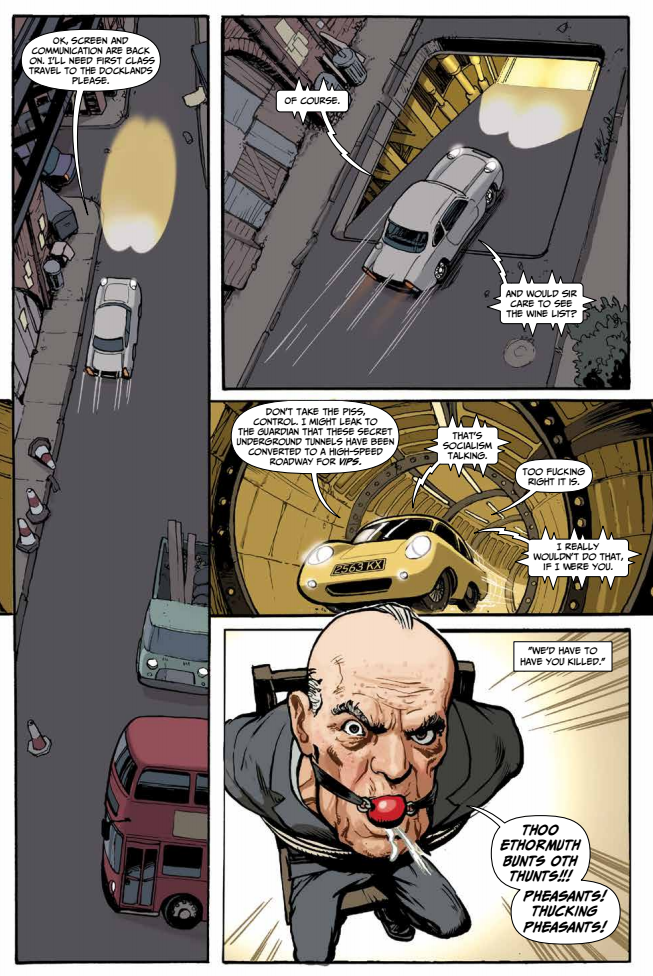 Kingsman: The Red Diamond #1 is an exciting and enjoyable introduction to this new story arc. Rob Williams and Simon Fraser do a top job of taking the helm, creating an interesting story that reflects the original tone of this series. Nothing feels forced, and it all seemed to flow in a tight and tidy way. I’m looking forward to reading more and seeing whether the momentum can be maintained.