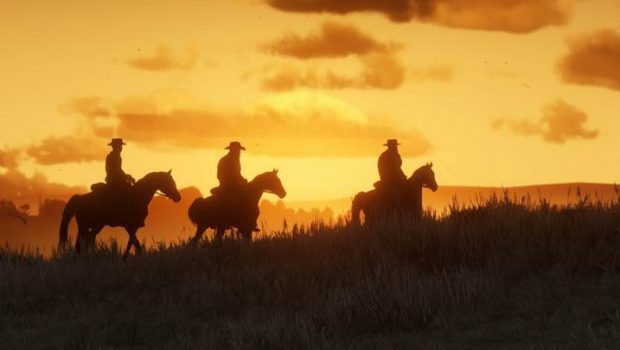 Today, the Red Dead Online Beta gets its first big batch of updates including new gameplay, weapons and clothing, additional balancing and a slew of community-requested improvements thanks to responses to our player feedback page. The update is live in-game now – see below for details.

Starting next week, compete with rival teams and Posses in the new Free Roam Event Fool’s Gold, where players fight to wear a protective suit of Golden Armor. Take down the current wearer to earn the armor and points, then turn the tables and rack up kills against the opposition.

And looking ahead, new game modes will arrive in the Red Dead Online Beta each week. Put your highwayman skills to the test with Target Races as you race other players on horseback to take down targets with speed and accuracy. Proficiency with a bow and arrow will give you an edge, take advantage of weapon and horse stamina pickups where you can, use your limited bullets wisely to remove targets or your attack your competition.

Take on friends and rivals in new Fishing Challenges. Opt in to a challenge to receive the appropriate equipment and bait, head to the water’s edge and start reeling in the big ones. For added ease, use Eagle Eye to pick a spot full of fish. Remember, you’re trying to catch the highest total weight of fish to win – which could be achieved by hooking several smaller fish or angling for one large catch – so keep everything you reel in.

Also coming soon: three new Showdown Modes where players and teams compete to capture and deliver bags, steal loot from each other and survive. Stay tuned for more details around Up in Smoke, Spoils of War and Plunder. With the addition of these new modes also comes the Featured Series blip – visit the Featured Series sign post or from the Quick Join menu to play the latest modes.

The Rare Shotgun is a beautifully engraved, faded brass version of the powerful, double-barreled longarm and is available today. Coming soon, be sure to get your hands on the Evans Repeater – a high grade, high capacity rifle that is devastating at medium and long range. Both weapons will be available via the Wheeler & Rawson Catalogue and from local Gunsmiths.

Treat yourself to a range of new Outfits, Boots, Coats, Gloves, Hats, Vests and more. In addition to all the clothing that will be available for purchase at your leisure, keep an eye on the shops and the Catalogue for Limited Time items that will come and go each week.

Express yourself with a new set of emotes including new reactions, greets and taunts. Like all Emotes, you can tap once for the standard emote and double tap for a more exaggerated expression. You can find new Emotes in the Wheeler & Rawson Catalogue then add them to your Emote Wheel through the Emote Wheel Management menu.

Updated Player Radar and Visibility: We’ve reduced the visibility of players blips over longer distances, so now your location won’t display to other players unless you are nearby – minimizing the likelihood of being targeted across the map by more aggressive competitors. This includes limiting voice chat to near proximity rather than players from across the map. Overly aggressive players will be highlighted from the map with a progressively darkening dot. If your style of play becomes more hostile, your map position (including your Posse members) will become darker and visible from further away.

Easier Parley and Feuds: Turn quarrels with other players into timed mini-deathmatches with easier to trigger Feuds, which can be initiated against a rival and their Posse after one kill. Alternately, instigate a temporary truce quicker after one kill with similar updates to the Parley system.

Enhanced Law and Bounty System: If you stir up enough trouble to earn a high bounty, you’ll increase the chance that a cadre of NPC Bounty Hunters will be out to get you. The higher the bounty gets, the more persistent your pursuers will become… so watch out!

Please keep the feedback coming as these new features arrive each week. In addition to new content, stay tuned for new weekly bonuses such as this week’s care package to help you tackle Daily Challenges and your other ongoing adventures across the five states. Head into the Red Dead Online Beta any time before Tuesday March 5th to receive a complimentary delivery of goods at your Camp’s Lockbox or at the Post Office consisting of:

Starting today, PlayStation 4 players will have early access to the Jawbone Knife, a unique melee weapon with a handle artfully carved from the remains of a slain animal’s jaw, as well as a range of new clothing options and three new emotes. In the coming weeks, PlayStation 4 players will get the Special Series that launches them directly into the latest early access mode starting with Open Target Races where you compete in an open space to take out the most targets on horseback.

Stay tuned each week for new content, bonuses, limited time clothing and more coming in and out of the Red Dead Online Beta and keep an eye out for more updates as we continue improving and growing the world of Red Dead Online.