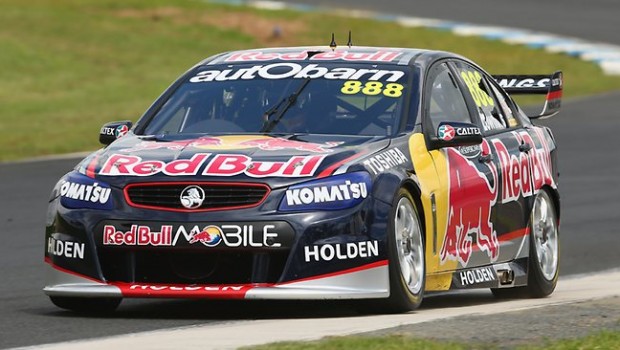 Red Bull Racing – Behind the scenes

Behind every great driver is the family you don’t see

V8 Supercars has today released the first in a three-part series of emotive, personal and never-before-seen webisodes titled “A Home Grown Family”.

Going behind the scenes with James Courtney, Todd and Rick Kelly and Triple Eight Red Bull Racing Australia, the series explores the dynamic of each of these family units, and introduces the partners, parents, children and teams behind these icons of the sport.

Similar to most Australians, the drivers of V8’s believe their family is a natural extension of who they are. But who are they?

Through this three-part series, we lift the lid on the inner workings of the Triple Eight Red Bull Racing team and the sibling rivalry between Craig Lowndes and Jamie Whincup; the competitiveness between the real-life siblings, the Kelly Brothers; and we meet James Courtney’s family – including his twin sister!

Join the team principal, mechanics, engineers, wives, brothers and children in this exclusive series, and experience the story of the V8 Supercars family like you’ve never seen before.

Behind one of the most recognisable faces in V8 Supercars is the family that has helped him build his success.

We go into the Courtney family home with James, his wife Carys, mum and dad, and children, Zara and Cadel.

Being childhood sweethearts, James and Carys epitomise the value of family. Having followed James across the globe, Carys lifts the lid on how it feels to be married to a race car driver and her fears for James when he goes out onto the track.

But behind the constant travel and the risk every time he steps into his V8 Supercar, James and Carys also offer a rare glimpse into the fun and romance of life in the fast lane, hilariously admitting to enjoying each other’s company in “small doses”.

Share the support, bond and love within the Courtney family unit, hear if James and Carys want Zara and Cadel to get into the sport, and how this young family represents the values and meaning of the broader V8 family.

In this webisode, we go under the bonnet and into the Triple Eight Red Bull Racing factory to experience the inner workings of the Triple Eight family, led by grandfather of the sport, Roland Dane.

Representing a different type of family dynamic within the broader V8 family, we talk to the drivers, mechanics and engineers about the healthy competitiveness between the two ‘brothers’ of Red Bull – Craig Lowndes and Jamie Whincup.

And as the all knowing ‘dad’ of the team, Roland Dane reveals the one ‘house rule’ that the boys must abide by, and we get their exclusive predictions for who is going to take out this year’s Bathurst 1000.

Meet Todd and Rick Kelly, the real-life brothers within the V8 Supercars family.

Being incredibly close (inseparable some would say) both on and off the track, Todd and Rick invite Australia onto their rural family farm in Mildura to get a glimpse into the Kelly brotherhood.

These brothers find their rivalry reaches an all-time high when they’re riding their motorbikes in the dunes of country Victoria, rather than on the track where you’d expect it.

In this webisode, Kelly Brother’s fans will literally peer through the eyes of the brothers, via GoPro technology, while they’re racing motorbikes, to experience how fierce the rivalry is.

Racing together for the first time since starting up Kelly Racing, now Nissan Motorsport, uncover the competitiveness and unique characteristics of each brother, how they work together and live together, inviting Australia into one of motorsport’s most unique sibling partnerships.