In addition to the MagDart technology, the smartphone maker demoed the realme Flash concept phone, the first Android smartphone that supports magnetic wireless charging, and several other magnetic charging accessories. 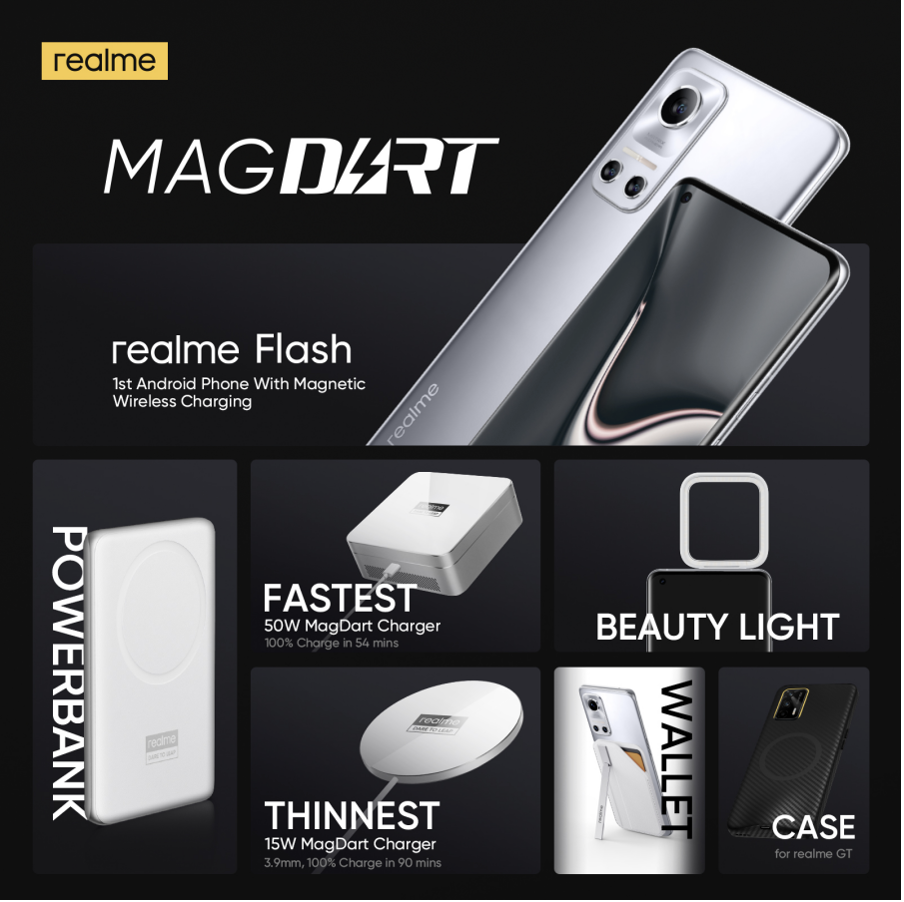 The 50W MagDart charger features an active air cooling system that keeps the mainboard and coil temperatures at a reasonable level. This is achieved through a compact and powerful fan that quickly removes heat by drawing a large airflow into the charger. As a result it can maintain the charging power at a high level for a longer duration of time.

The 15W MagDart Charger is only 3.9mm, 26.4% thinner than the MagSafe Charger, but it is still faster than MagSafe due to its Separated Coil & Board design. Through the unique design, the mainboard and the coil are located at opposite ends of the charging plug and charging pad respectively. Not only does this enable a thinner, more compact design, it also reduces heat generation – thus providing longer high power charging hours, which can charge the 4500mAh battery from 0 to 100% in 90 mins, much faster than the rival product.

The realme Flash concept phone features a 4500mAh battery capacity and can support up to 50W of MagDart wireless charging. This means the phone can charge from 0 to 20% in just 5 mins, 0 to 100% in just under an hour, nearly the same as realme’s 50W SuperDart wired charger.

2-in-1 MagDart Power Bank & charging base – paired together to form a vertical charging station, the 2-in-1 platform allows you to charge your phone and battery bank at the same time. Need charge on the go? The stylish white vegan leather and aluminium power banks easily attaches to the smartphone.

MagDart Beauty Light – designed for portrait photography. It can be easily connected to the phone via MagDart and powered via smartphone reverse charging to provide an extra flashlight when taking selfies.

The MagDart wallet – can be turned into a kickstand to hold the phone up when watching movies or making video calls. It’s able to hold three standard credit card.

realme GT* MagDart Charging Case  – can enable realme GT compatible with MagDart. This case connects through the Type-C connector and allows the phone to be charged wirelessly via the MagDart technology.

* realme GT is not available in Australia

The products were unveiled as part of an innovation showcase into future technologies, with pricing and commercial launch dates yet to be confirmed. Andy Yang, realme Australia Managing Director, says the showcase acts as a testament to the company’s commitment to bringing fast charging to new technologies.

“We know that consumers are time poor and don’t want to be waiting around for their phone to charge. Last year, realme unveiled its world’s leading 125W SuperDart charger. This year, we’re building on that to bring fast charging solutions to the world of magnetic wireless charging. With realme, we’re determined to make low battery anxiety a thing of the past – even in a wireless world.”