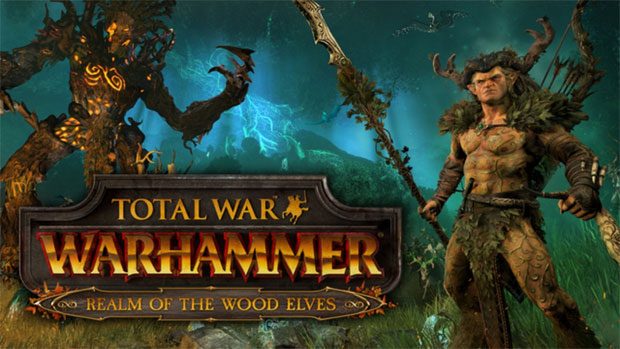 Summary: Total War: Warhammer Realm of the Wood Elves is easily one of the best DLC's for this game at the moment!

Six months ago Creative Assembly taught us just how boring our own world’s martial History is by releasing Total War: Warhammer. Previously we’d fought battles as the Roman Empire, Feudal Japanese lords, or even Napoleon himself, but once we got a taste for war-wizards, dwarf-artillery, and goblin suicide bombers, hordes of PC owners fell in love with Games Workshop’s fantasy-battle franchise. TW: Warhammer has been a sales hit for publisher, Sega and its developers, Creative Assembly have shrewdly gone on to expand the list of fantasy armies with a steady drip-feed of DLC. The latest is Realm of the Wood Elves, which unleashes an expansive roster of supermodel tree-Nazis into its campaign. 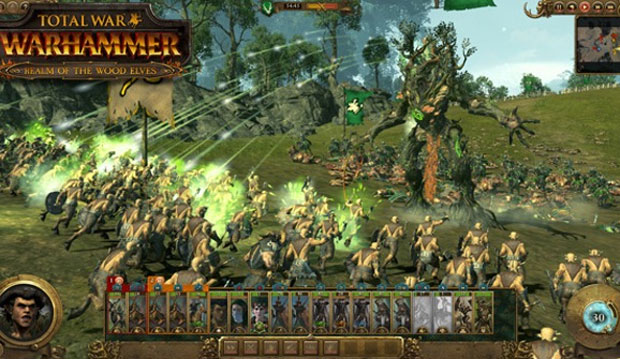 The wood elves of the Warhammer world are certainly ruthless buggers. They love their forest (known as Athel Loren) and will commit unspeakable acts of aggression to protect and expand it. Their main totem is the Oak of Ages, a giant tree in the middle of their heartland which gets steadily bigger and more powerful the more success you have with their campaign. Wood Elves are not driven primarily by gold, their true goal is to collect amber, (a sort of magical tree sap) which helps grow their beloved Oak, and expand Athel Loren. This is done mainly by kicking the arse of enemy factions and forging alliances with other elvish clans. 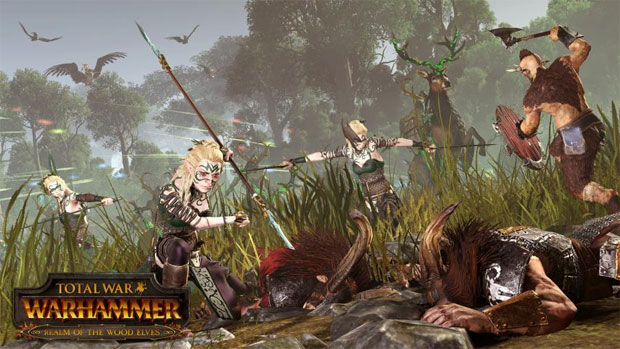 ROTWE comes with two playable legendary Lords (i.e. faction generals). The first is Orion, a satyr-like elvish demigod. He draws in the more typical elvish roster first; lots of archers, stag-mounted spear warriors and elvish melee units of various types. The other Lord is Durthu, a tree spirit (think Treebeard from the Lord of the Rings) who is a big funky guy with lots of funky friends. He draws in primarily dryads, tree-men, forest-wights and other such supernatural units. Best of all there is finally a real dragon in TW:W with the forest-guardian. This scaly beast can be allied to join your army too, and is a lot of fun reigning havoc on the hapless enemy. 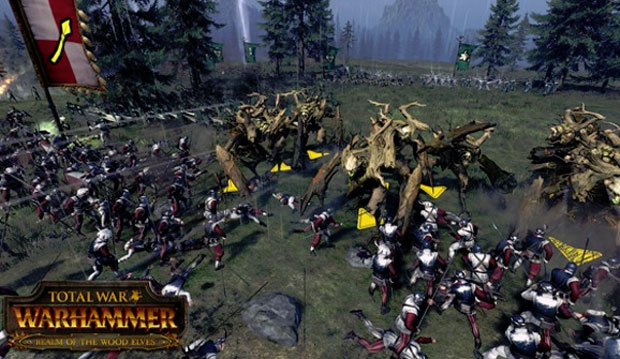 Indeed, what’s great about this new DLC is the uniqueness of many of the units; monsters, archers, and spell-casters all functioning in ways we haven’t seen in the game previously. The ROTWE campaign opens up the long-ignored western reaches of the playing map, and gives players a chance to explore and battle across unfamiliar territory. Unlike other factions, wood elves can conquer any region, so there’s nothing stopping you spreading environmental terrorism to dwarfish mountaintops or the dark glades of the vampire-kings. I for one am looking forward to planting my pretty elvish gardens all over the Chaos Waste, and teaching its demonic hordes the joys of horticulture. 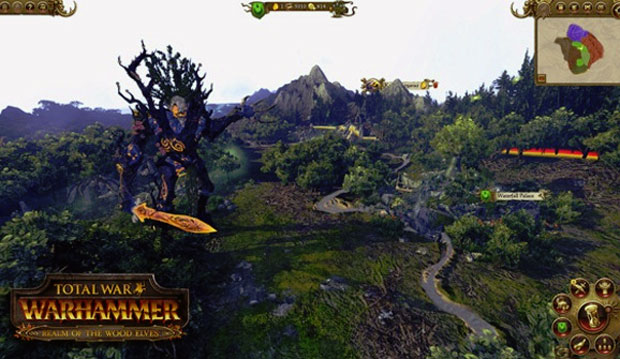 Like the previous Beastmen DLC, ROTWE adds an additional campaign map to the game with the ‘Season of Revelations’ Wood Elves story Campaign. This is a shorter, more-focused, and trickier challenge. Considering the Grand Campaign can take up to 50 hours to conquer, these story-driven campaigns are a most-welcome alternative, and it’s just a shame (so far) only the Wood Elves and Beastmen have them. 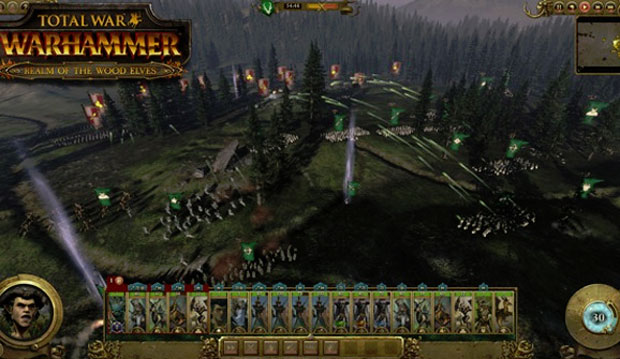 The Realm of the Wood Elves won’t change your mind if Warhammer wasn’t your cup of tea to begin with, but if you do enjoy the game, this DLC is the best and most value-for-money yet. It adds still another player to the colourful Warhammer world. And whereas previous DLCs (i.e. Chaos warriors, Beastmen) motivations have just been to destroy everything in their path, the Wood Elves’ goals are constructive and relatable. Playing it, you might just catch yourself wishing our own world had a few forest-Nazis to help spread the greenwood around.