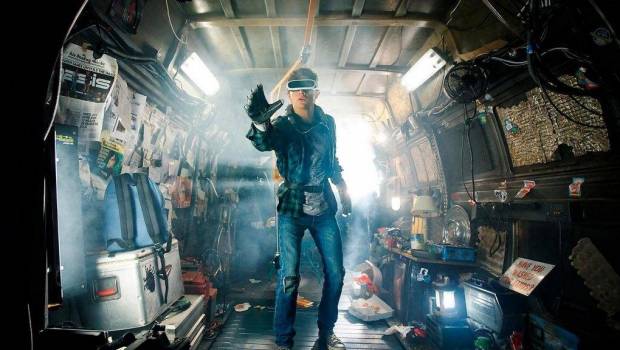 Out of all the literature that caters to geek culture, such as the sci-fi extravaganza The Hitchhiker’s Guide to the Galaxy or the bonkers detective noir The Eyre Affair, very few pieces are as controversial as Ernest Cline’s novel Ready Player One. Although it is a well-reviewed best-seller, many have said it is a major detriment to geek culture due to its pandering, its excess of pop references, its terrible prose and claims of misogyny, racism and homophobia.

It’s become apparent in recent years that Spielberg’s films can be divided into two categories. In his historical filmography, he has The Post, Bridge of Spies, Munich and Lincoln; these are films that aspire for gravitas and respectability. In other words, they are made “For Your Consideration”. Then we have adventure films such as The BFG, War of the Worlds, Minority Report and The Adventures of Tintin; these are all films that are made purely for entertainment value as well as being tentpole releases. In other words, they are made “For Your Money”.

Ready Player One is an obvious entry for the latter category. Spielberg clearly thought he needed a bigger boat budget since his last highest-budgeted film, Indiana Jones and the Kingdom of the Crystal Skull (2008). With all his talent and filmmaking skills to support him, will he be able to make a silk purse out of a sow’s ear? Or will it be like taking dinosaurs off the island like in The Lost World: Jurassic Park (1997); that being the worst idea in the long, sad history of bad ideas?

Ready Player One is set in 2045 (in the future), with the world on the brink of chaos and collapse (like the present). People have found salvation denial in the OASIS, an expansive virtual reality universe created by the brilliant and eccentric Willy Wonka/Steve Jobs James Halliday (Mark Rylance).

When Halliday dies (or does he?), he leaves his immense fortune to the first person to find a digital Easter egg (not the chocolate kind) he has hidden somewhere in the OASIS, starting a contest that entices everyone. I don’t just mean a group of people, I mean what Gary Oldman yells in Leon: The Professional, which is EVERYONE! 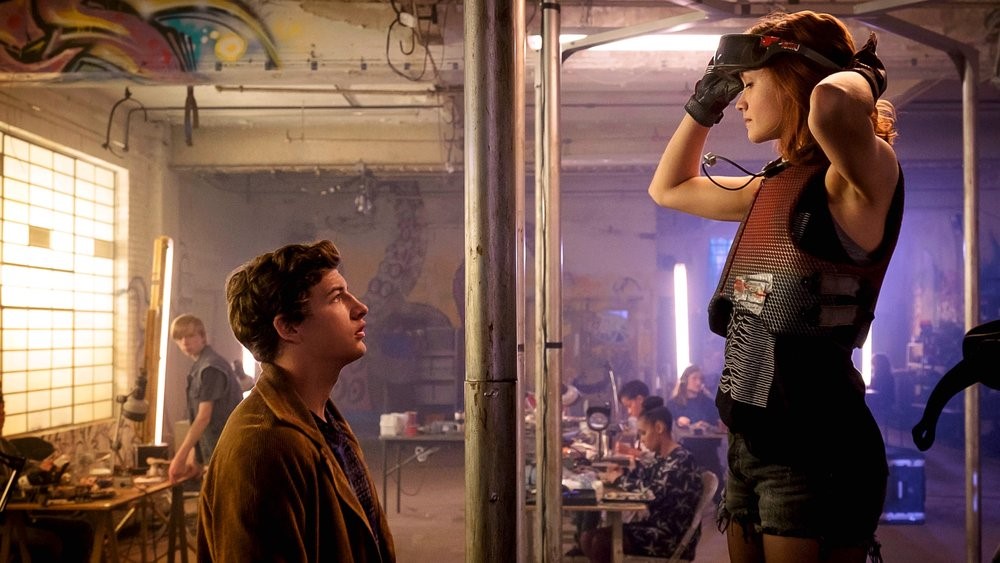 A very likely young hero named Marty McFly Wade Watts (The Tree of Life’s Tye Sheridan) decides to join the contest after witnessing his Aunt May Aunt Alice being assaulted by Uncle Ben her boyfriend (who is part of a long line of them). Wade is thrown into a reference-packed pop culture world filled with colour, fun and thankfully eventually, danger.

Predictably, there is the evil megalomaniacal company IOI, headed by greedy CEO Nolan Sorrento (Ben Mendelsohn). Sorrento wants the egg to satiate his greed, all of which is linked to earning higher profits because money! Everybody likes money! That’s why they call it money! The race is on, like Donkey Kong!

Does Ready Player One fix the problems of its source material to become a legitimately great film that belongs to the pantheon of Spielberg’s filmography? The answer is 42 no. Although there are some fun sequences and genuine wonder to behold, the film is a pandering, noisy, visual mess with a thin plot and even thinner characters. 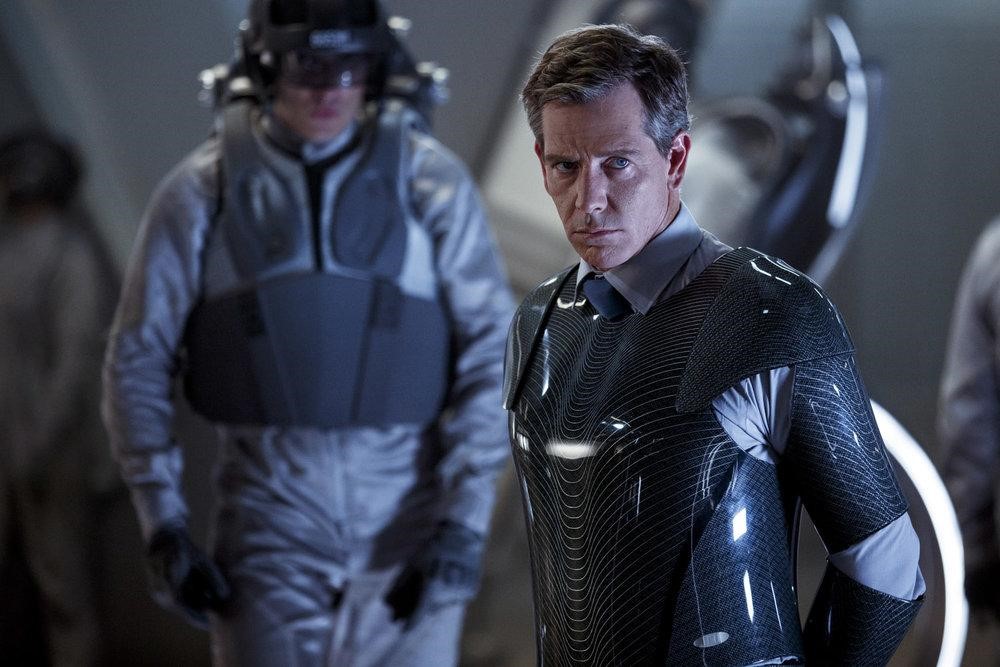 Let’s begin with the positives. Veteran actors Ben Mendelsohn and Mark Rylance have fun with their roles as the sinister villain and the creator of the OASIS, respectively. However, they are retreading their previous performances. Mendelsohn recycles the generic, villainous Mendo role, where he attempts an American accent and grimaces frequently, while having Scooby-Doo aspirations. If you’ve seen The Dark Knight Rises and Rogue One, you’ve already seen Mendelsohn’s performance. The same can be said for Rylance, whose part is similar to his one in The BFG.

Now we get to the negatives, and like the horror movie the film references, this is where the blood flows. The characters (if you could call them that) are incredibly thin and boring, with no dimension or arc whatsoever, especially when the film is a hero’s journey. Tye Sheridan (who’s fantastic in indie films such as Mud and Joe) comes off as bland, while Olivia Cooke (who’s great in Me and Earl and the Dying Girl and The Limehouse Golem) takes her role and lends it credence that clearly wasn’t in the script. 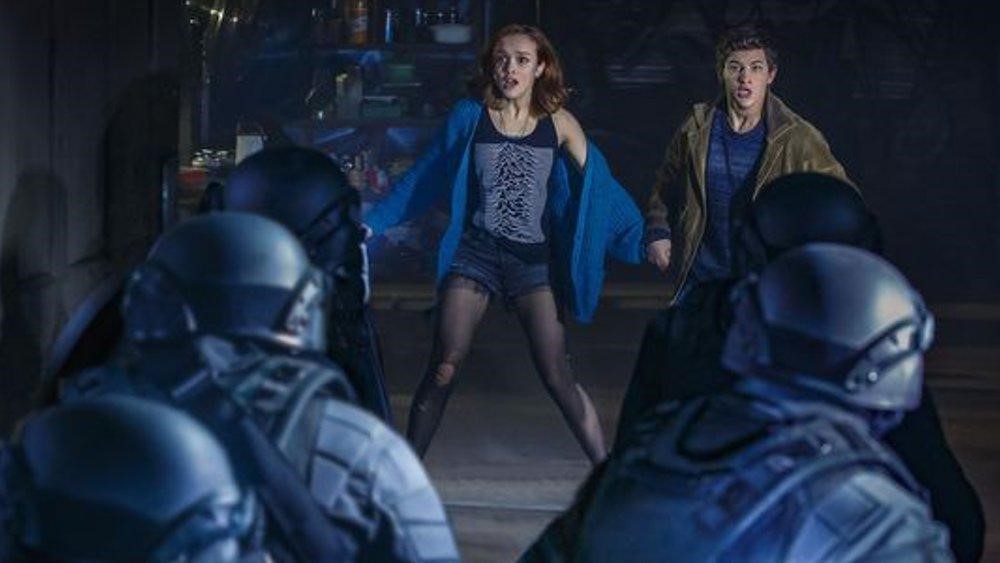 The interactions between the two are embarrassing and mildly creepy. Apparently, quoting pop culture references to each other quantifies as developing a rapport or a sense of chemistry. It’s quite reminiscent of Spielberg’s The Terminal (2004), where Diego Luna’s character and Zoe Saldana’s character never meet, but they exchange messages to each other. In the end, they’re newlyweds, kind of like Ready Player One. It just comes off as forced and awkward.

The problem with the female characters is that the film never sees them as anything other than plot devices to serve the main character. Samantha (or Art3mis) has her own motivations involving her family but it only ends up being a means to an end, which is Wade. In the OASIS, she’s an avatar with an attractive body and anime-like eyes, and she happens to be the only person that likes Wade’s references. She has a birthmark (Sure, Jan) across her face that makes her vulnerable and she only overcomes it when Wade does.

Aunt Alice is a woman who’s been abused by countless lovers because that’s what all single mums do, like in Kingsman: The Secret Service (2014). One of the challenges the characters must achieve to get the next artifact involves wooing a woman. Hell, the character of Aech can’t be taken seriously in the film because she’s in fact [SPOILER ALERT] a woman! 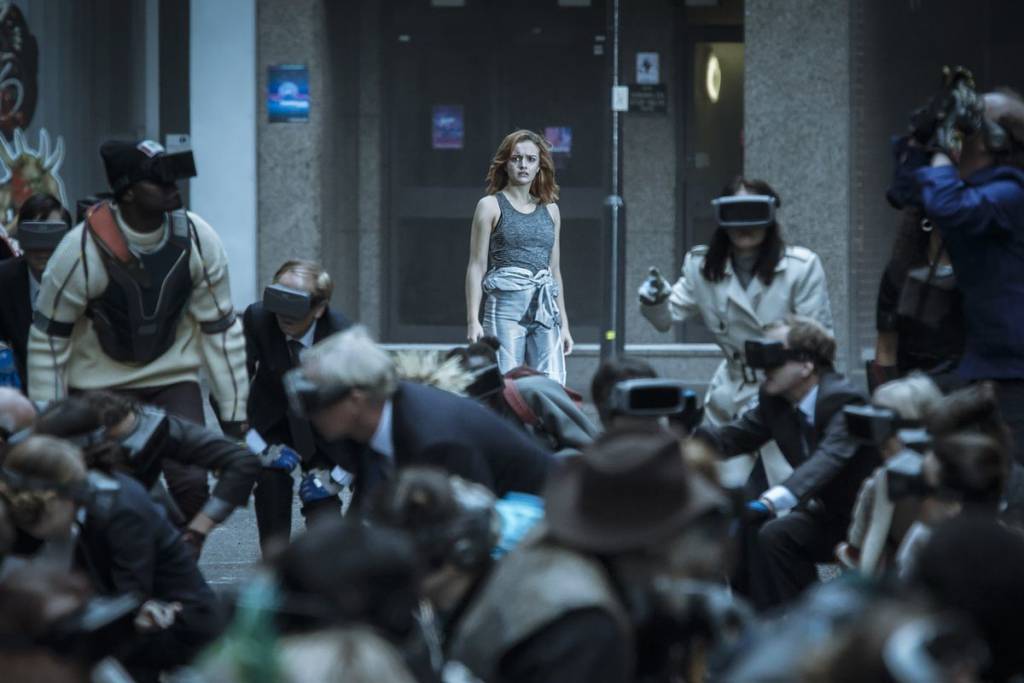 The other roles from the heroes are interchangeable (apart from Lena Waithe, who’s amusing) and they come off as lame attempts at rekindling child roles from Spielberg’s prior projects like Indiana Jones and the Temple of Doom and The Goonies. Yes, I see you, Short Round 2.0! Even Simon Pegg (who’s a geek thanks to projects like Spaced) is wasted here. Not Shaun of the Dead-Winchester wasted, but his talent sure is.

Other than the extended sequence that ventures into a horror film, they don’t add much to the film, apart from being visually splendorous and that they can make people say “Ooh, there’s The Iron Giant! Ooh, there’s Freddy Krueger! Ooh, there’s Chucky! Ooh, there’s the DeLorean! Ooh, there’s King Kong! Ooh, there’s Kratos!” If you thought that was annoying, try experiencing my Ready Player One review 140 minutes of it. 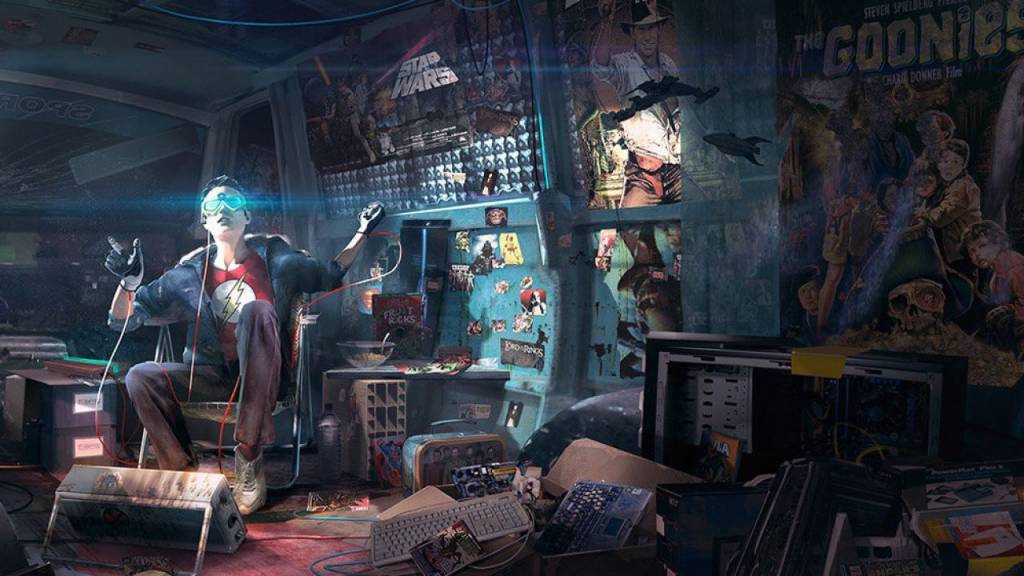 The camerawork and visual information is so dizzying and assaultive that Spielberg’s handling of the visuals becomes blurry, exhausting and nauseating. There’s just so many references flying around that the filmmakers were so preoccupied with whether or not they could that they didn’t stop to think if they should.

There’s the implications of the knowledge of the references in the film. Apparently, you’re seen as a bad person if you do not know what the references are, which is evident in a confrontation between Wade and Nolan. It has the nerve to share lines of dialogue like how a fanboy can spot a hater. If this is the standard of how hero-villain exchanges go, then we’re kind of screwed.

Ready Player One isn’t a terrible movie but considering the talent (both in front of and behind the camera) and the potential from the novel (if not the execution) that could have been adapted, it doesn’t feel like anything like the OASIS in the source material. Instead, it should be thrown in the Boo Box in Spielberg’s Hook.

TWO AND A HALF SUPER MARIO STARS

Summary: Although there are some fun sequences and genuine wonder to behold, the film is a pandering, noisy, visual mess with a thin plot and even thinner characters.