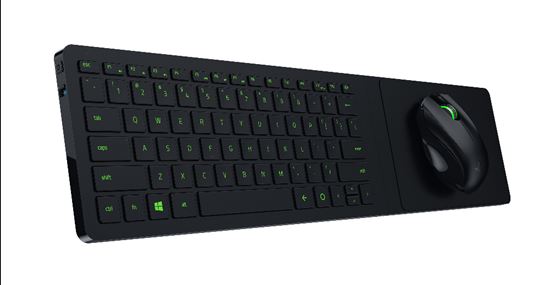 IRVINE, Calif. – Razer™, a world leader in connected devices and software for gamers, today announced the much-anticipated release of the Razer Turret, a mouse and integrated keyboard and mouse surface that together deliver the power of desktop-grade gaming peripherals into the laps of gamers. The combo was originally unveiled as a prototype in early 2015.

Designed with a focus on enabling a PC gaming experience from the couch, the Razer Turret consists of a gaming grade chiclet keyboard with full anti-ghosting and a highly precise gaming mouse with a 3500 DPI sensor. The integrated magnetic mouse mat ensures the mouse will not slip even during intense gaming sessions.

“The Razer Turret brings the immense world of PC gaming to a previously impossible frontier—the living room—where only consoles have traditionally roamed until now,” says Razer Co-Founder and CEO Min-Liang Tan. “Finally, we have a perfect solution for gamers to enjoy the unrivaled precision of a mouse and keyboard combination from the comfort of the couch with the durability and reliability that PC gamers demand.”

The Razer Turret comes with dual wireless connectivity, enabling users to play lag-free when connected to a console via Bluetooth LE or to a PC via the bundled wireless 2.4 GHz adaptor. The performance of the Razer Turret rivals desktop-grade gaming hardware, providing a tactical weapon that can be unleashed on opponents from a casual environment.

The Razer Turret’s ergonomic and ultra-slim form factor is made specifically to fit on a user’s lap. A foldable hinge ensures that the lapboard is unobtrusive and dock-able, leaving it a normal part of the living room environment when not in use.

Made to withstand even the most action-packed gaming marathons, the Razer Turret has built-in high-capacity lithium polymer batteries, so a player’s kill streaks will not be interrupted by untimely battery warnings. By supporting up to four months of usage on the keyboard (an estimated 40 hours of nonstop play on the mouse), Razer Turret owners won’t have to charge their gaming weapons after every use.

PS5 Opportunists take to eBay with ridiculous prices of this next-gen console! →