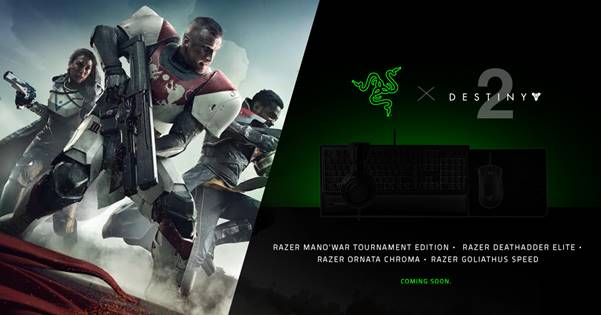 LOS ANGELES – Razer™, the leading global lifestyle brand for gamers, today announced a partnership with Bungie, one of the world’s most respected games studios, on its upcoming title Destiny 2, published and distributed by Activision.

Razer will release a suite of Destiny 2-themed products to celebrate the game’s upcoming launch on PlayStation®4, Xbox One™, and PC.

The products include the Razer DeathAdder Elite, the most accurate mouse ever created; the Razer Ornata Chroma, a keyboard that combines the tactility of a mechanical keyboard with the comfort of membrane keys; the Razer ManO’War Tournament Edition, a headset designed for ultimate comfort that is compatible with every gaming platform; and the Razer Goliathus Speed, the industry benchmark for soft gaming mouse mats.

“We’re very excited to partner with Razer to create a line of premium gear that we know Destiny 2 players and action shooter fans will love,” said Jim McQuillan, Creative Director, Brand & Marketing at Bungie. “The team has come up with some cool ways to pair Destiny’s art and designs with Razer’s high-performance hardware, providing players with new ways to customize their Destiny 2 experience.”

Destiny 2 was announced earlier this year and is the sequel to Destiny, which set records as largest new console video game franchise launch in history.

“This is one of the most anticipated games this year, with a community that’s been yearning for a PC release,” says Min-Liang Tan, Razer co-founder and CEO. “Destiny’s innovation and depth is remarkable. We’re honored to be working with some of the world’s best developers to support the launch of the game on PC.”

Razer’s peripheral suite will go on sale this September.