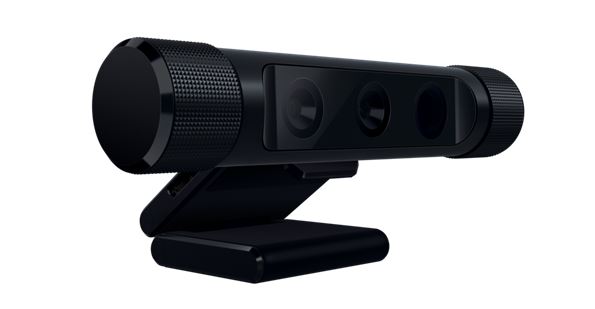 The Razer Stargazer revolutionizes webcam use as the first device of its kind suitable for quality streaming content production. It sets a new benchmark for video capture at 60 frames per second at 720p, a magnitude better than the 30 frames-per-second limit of common webcams, and it can provide high-definition 1080p video at 30 frames per second. The Razer Stargazer also includes an automatic noise-cancelling, dual-array mic.

Powered by the Intel® RealSense™ SR300 camera, the Razer Stargazer is also enabled with next-generation features that push the boundaries on what a consumer-grade webcam is capable of right out of the box.

The Dynamic Background Removal capability also opens possibilities beyond gaming. Video conferences using Skype with Personify will be able to remove or swap backgrounds. FaceRig, QQ Video and ooVoo are also supported by the camera. Face and object 3D scanning will work out-of-the-box, and users can accurately port real-life objects into the digital world in full-HD. This holds promise for game development, as captured 3D scans can quickly be ported directly into development engines like Unity.

The Razer Stargazer also offers the most advanced facial and gesture recognition in a consumer camera. Up to 78 points on the face and 22 points on each hand can be tracked by the webcam. With this sensor advent, users can unlock their computers via Windows Hello’s face security system, launch applications with gestures, and play games that track facial expressions and hand movements like Nevermind and Laserlife for a new level of immersion.

“Webcams have not had any real innovation in several years, beyond resolution quality,” says Razer CEO and co-founder Min-Liang Tan. “There are exponentially more people streaming and video conferencing than ever before and their needs are constantly evolving. The Razer Stargazer can revolutionize work done by game streamers, YouTube personalities, 3D designers and game developers with additional benefits to the average computer user. Simply stated, this is the webcam of the future.”

Game streaming in particular has seen major growth in recent years. A 2015 report by SuperData says that gaming-related streaming content and their studios are worth $3.8 billion worldwide with more than 480 million tuning in.

The Razer Stargazer joins Razer’s one-stop-shop for streaming hardware – including the Razer Seiren and Seiren Pro microphones and related accessories – and will be available in Q2 2016. Razer plans to send out a limited number of Razer Stargazer units free to streamers via its Sponsored Streamer Program.