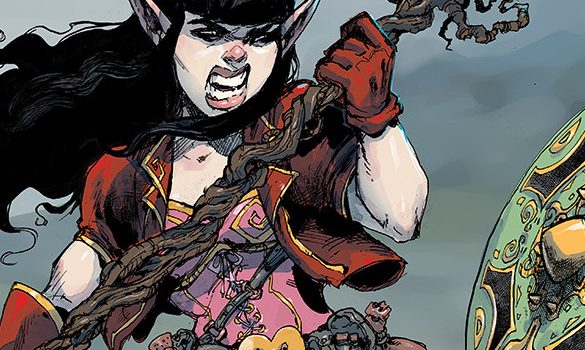 Summary: Dee and Betty come to the rescue!

Things are looking pretty bleak for the Rat Queens, as they are held captive by the Fleshers. Little can be done, apart from awaiting their turn to be transformed into a hideous flesh beast. Meanwhile, Dee and Betty devise a plan to try and save their imprisoned buddies.

This issue opens with the Queens chained and caged by a notorious flesh cult. They watch on helplessly as a small, terrified creature is subjected to an awful transformation experiment. His body twists and bubbles, transforming the creature into a black pulpy mess. The leader of this cult, then turns its attention to Orc Dave, believing him to be a powerful specimen that will survive the transformation process. The awful truth is that orcs generally have a high survival rate, which is why Braga also catches their attention. Orc Dave and Braga are quick to discover a dark and tragic truth that will hit them where it hurts the most.

Meanwhile, Betty and Dee are reunited after Dee answered the prays of a distraught and broken Betty. A quick conversation is exchanged where they talk about Bilford Bogin, Dee’s new divinity and the fleshy situation. They quickly devise a plan after the well-timed arrival of two fleshers, nicknamed “Oyster Boy” and “Disease Hand”. Without a moment’s hesitation, these badass babes swing into action, hacking, slashing and casting spells. They come out of this fight victorious and quickly get the answers they have been seeking after delving into the mind of one of these beasts. Time is of the essence as the Queens desperately need their help.

Ahh yes, the penultimate issue of this arc, and actually the final arc for Kurtis Wiebe and Owen Gieni before passing on the gauntlet. I’m feeling a bit emotional about all of this, and this highly emotional issue isn’t helping keep the eyes dry either. Naturally, following on from the events from the previous issue, this one is dark, delving into some heart-breaking revelations. I won’t reveal what these developments are, but what I will say is that they are both tragic and incredibly moving. If you’ve been following my reviews of Rat Queens, you’ll know that I’m a huge fan of Orc Dave, so seeing him so broken and fragile just breaks my little heart. There is one particularly moving scene involving him and Violet that made the corners of my mouth quiver. Kurtis Wiebe weaves a highly compelling and undeniably powerful scene here, and I applaud him for it.

This is one of the few issues of Queens where the serious tone of the story overpowers the humour. Usually delving into an issue of Rat Queens means endless jokes and non-stop giggles at their hilarious shenanigans, however, the more ominous and sombre tone of this issue is what stood out to me. These Fleshers are serious business, the Queens are in big trouble, Dee just transformed into a deity and Braga and Orc Dave encounter ghosts from their pasts. It’s all happening, and it’s quite intense and provoking. It’s an interesting change of pace.

Owen Gieni’s art matches the highly emotive content of this issue, delivering some pretty moving scenes with impassioned interactions between characters. So many of our beloved Queens look broken and defeated in this issue. You really get the sense of their plight from how each of them are reacting and responding to what is unfolding around them. Contrasting to this are the scenes involving Dee and Betty. They are powerful and fearless looking, not allowing anything to stand in their way. Their fight sequence is pretty epic, and I absolutely love seeing Dee in action. I’m also a fan of how disgusting Gieni draws the Fleshers. They are hideous abominations, and I love how they look. The colour palette is quite muted, matching the bleakness of this issue. There are some wonderful pops of colour that we see, mainly from Dee and Betty’s fight, with magic explosions and vibrant purple crystals.

Overall, this was a highly moving and emotive issue of Rat Queens, filled with plenty of heartache and pathos. There is also a lot of action and fast-paced fight sequences that will keep you on the edge of your seat. Prepare yourself, there may be a few damp eyes after reading this chapter. 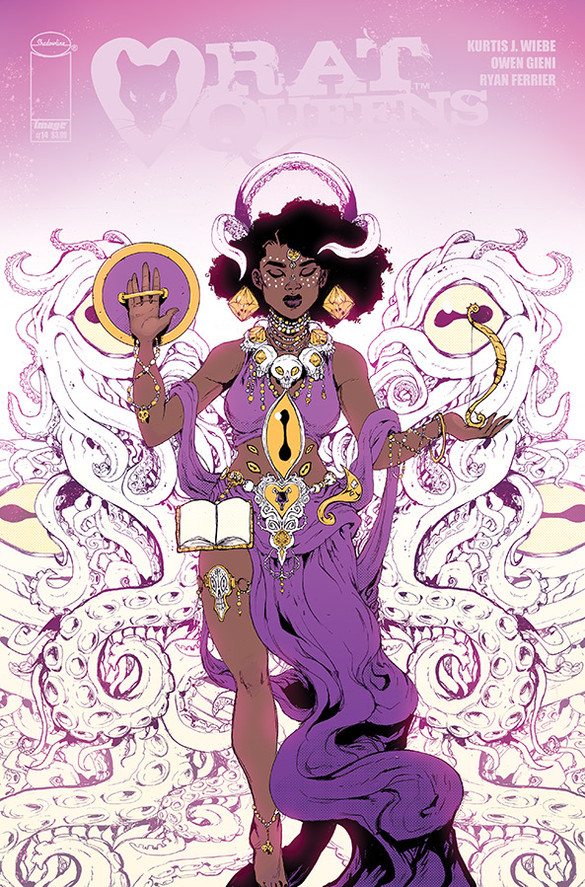 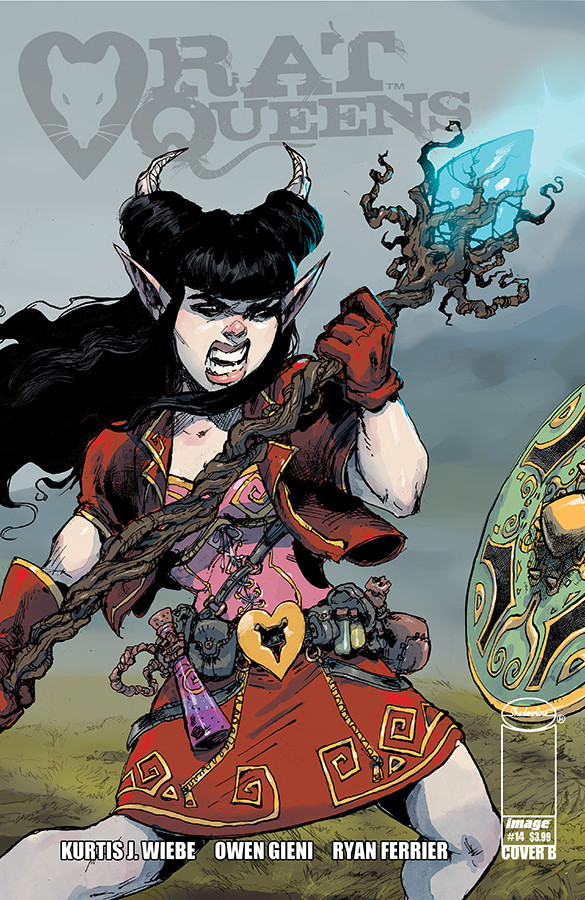