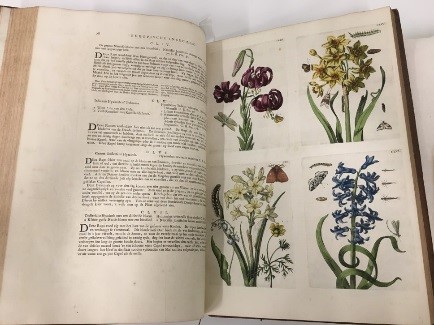 In the age of the e-book, it’s easy to forget that books are not just text that can be digitised. They are also treasured objects – some rare, delicate and layered with extraordinary history.

To celebrate Melbourne Rare Book Week, Melbourne Museum will reveal one rare book a day from the mysterious depths of its collection, counting down from 3 July seven of the rarest books hidden in its storerooms.

Because these volumes are so delicate, they are only able to be shown occasionally. They include gorgeously hand-coloured images of birds, insects and plants, historically important works that were the first of their kind, and very limited editions only ever privately distributed.

Among the possible selections is Aurora Australis, the first book printed in Antarctica. The book was made by Antarctic explorers as a winter project designed to prevent boredom. The explorers took a borrowed press with them to Antarctica and expedition artist George Marston learned lithography and plate etching to produce the illustrations for the book.  But most unusual are the covers, created by motor sledge mechanic Bernard Day who, without any kind of instruction, made them out of packing cases. It is thought fewer than 100 copies of Aurora Australis were made and they were not numbered but the giveaway word ‘CHICKEN’ stencilled on the underside identifies the Melbourne Museum’s copy. Others are labelled with ‘BACON’, ‘BUTTER’ or ‘PETIT POIS’.

The oldest book in the collection is Martin Lister’s Historiae sive synopsis methodicae Conchyliorum, the first comprehensive, illustrated work to cover shells, and the first to attempt a systematic classification of molluscs.  Museums Victoria holds one of only two copies in Australia of this book, published between1685 and 1692.

The shell encyclopaedia is important not only for its scientific value but also for its social history.  It was written by Queen Anne’s physician Martin Lister and illustrated by his daughters, Anna and Susanna, who were pioneering scientific illustrators, believed to be the first female artists to use a microscope in their work.

Melbourne Museum Manager Gordon White said Melbourne Rare Book Week was a wonderful opportunity to remind people of the pleasures of the past. “Historic books are not just information sources. They are art, science and stories of human endeavour. We hope people will take this opportunity to come to the Museum and enjoy them.”