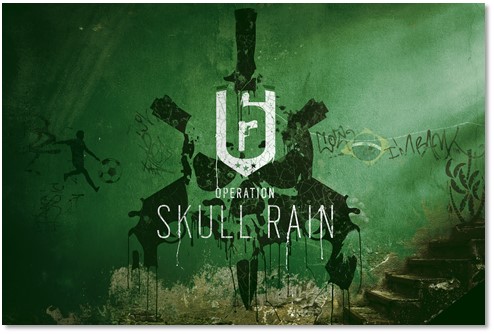 In Skull Rain, the Favela map is the most destructible and open environment to date in Tom Clancy’s Rainbow Six Siege. Two BOPE Operators, Caveria and Capitão, have been enlisted to provide their expertise of the region and assist local law enforcement in regaining control of the area.

The development team is committed to continuously improving the gameplay experience by adding new content and gameplay optimization including:

If the competition becomes too rough, players can now cast a vote for their team to surrender during a Ranked match. This will end the game and allow players to move onto another match. This new feature will be available prior to the 3rd round.

Introducing a new gameplay mode available in Custom Games, Tactical Realism was created to further immersion where tension runs high as players must carefully assess, coordinate, and communicate their movements at all time.

Catering to a variety of playstyles, the angled grip accelerates the transition between hip fire and ADS, which allows for an aggressive ad fast-paced playstyle.

As with previous updates, the new Operators are immediately unlocked for Season Pass owners, with exclusive access granted for seven days. All players can then unlock the Operators with Renown or R6 Credits after the exclusive period ends on August 9. The Favela Map will be available for all players on August 2.