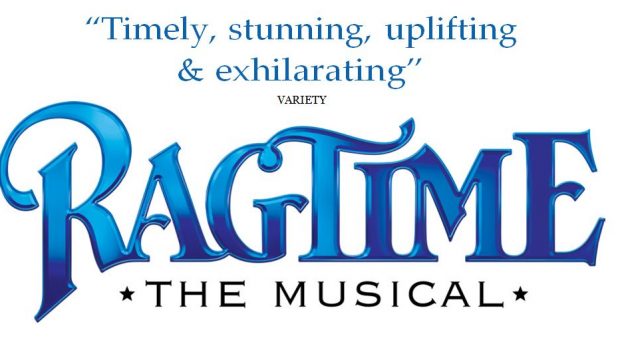 RAGTIME THE MUSICAL COMING TO MELBOURNE!

RAGTIME, The Musical makes its much anticipated Australian Premiere on 2 November at Arts Centre Melbourne’s State Theatre for a season of 11 performances.

Based on E.L. Doctorow’s 1975 blockbuster novel, RAGTIME, The Musical ran for 834 performances in its initial 1998 Broadway season and won four Tony Awards including Best Book and Best Score. The Book for the musical is by Terrence McNally (The Full Monty), Music by Stephen Flaherty (Anastasia) and Lyrics by Lynn Ahrens (Seussical).

The Production Company’s Artistic Director, Ken Mackenzie-Forbes said “We first secured the rights to Ragtime, The Musical back in 2003. Set in a crucial era of America’s race integration, its story is more relevant than ever. Ragtime brilliantly entwines the lives of famous historical figures with new characters created by Doctorow to tell this riveting and emotional story. Now in 2019 we have been fortunate to have secured a brilliant all Australian cast to perform the divergent range of characters in this powerful musical. We know this production will wow both its huge legion of fans and those lovers of musicals seeing it for the first time. This timely portrait of race conflict and human rights tells its powerful story with pageantry and emotion.”

The Production Company is pleased to announce internationally acclaimed tenor Alexander Lewis joins the cast in the role of Tateh and Georgina Hopson, the 2017 winner of the Rob Guest Endowment Award, will play the role of the stifled upper-class Mother.

They join a stellar cast including Kurt Kansley (whom Melbourne critics hailed for his recent performance as Che Guevara in Evita) in the role of the daring young Coalhouse Walker Jr, Chloe Zuel is his fiancée, Sarah. (The Sydney Morning Herald described her as “a compelling dancing-singing-acting triple threat” for her Anita in West Side Story).

Stephen Flaherty’s magnificent score features a breathtaking range of musical styles including the ragtime rhythms of Harlem and Tin Pan Alley, the klezmer of the Lower East Side, brass band marches, delicate waltzes, up-tempo banjo tunes and expansive anthems. This truly unique and powerful portrait of America is sure to inspire.

Tickets are $50 to $150 with Under-18’s half price at all performances and reduced price mid-week matinees.