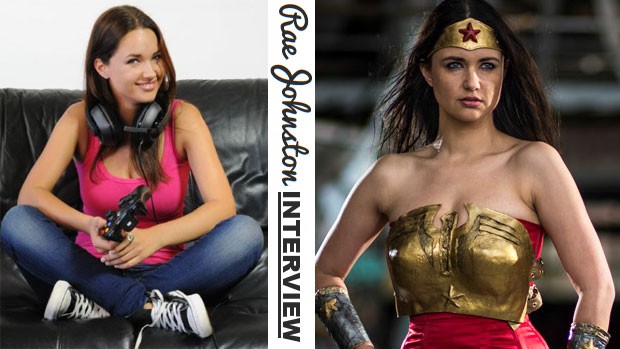 Impulse Gamer recently caught up with Australia’s very own Wonder Woman of journalism, gaming and cosplay, Rae Johnston to discuss her passion about gaming, love of William Moulton Marston’s Amazonian Princess and how to get into the video game industry as a writer plus her role in Bonus Stage, a Live Video Game Talk Show.

Welcome to Impulse Gamer Rae and how did you become involved in Gaming?

I’ve been playing video games for as long as I can remember and my mum was actually the gamer in our family. Some of my earliest memories were sitting on her knees playing games like Pac-Man and Wonder Boy which were pretty fun. She even made me a Pac-Man and Miss Pac-Man birthday cake which I thought was amazing but as I got older, I realised that it was just two circles with a slice cut out but I still thought it was pretty cool <laugh>. I also remember going to my Nan’s house and taking my NES (Nintendo Entertainment System) when she would look after me for the weekend and we would just sit there playing it together. So gaming has always been a big part of my life. 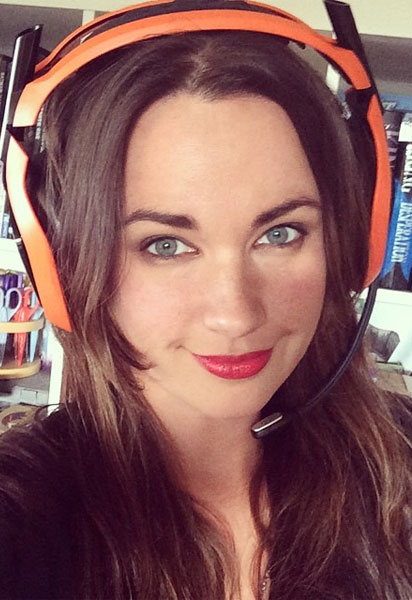 Tell us how you became involved in the video game industry as a journalist?

I never thought that working as a journalist in the video games industry was possible but when I started performing as a presenter and actor, I took a chance and auditioned for a gig on “Save Point”. I remember seeing the casting call and they needed someone with on camera experience but also with knowledge of video games and I thought “ha-ha… I got this!” My audition review was actually for Ape Escape on the PSP and after talking about the game, I got the job immediately. I also started writing for a bunch of different publications and ended up the Editor of Tech Life magazine and it all went from there.

Given the difficult nature of breaking into the industry as a writer, what advice can give?

If someone wants to get into writing about games, they need to love writing, not just games. It’s all well and good to really enjoy video games and being passionate but if you don’t love writing, you’re going to have a bad time. So write as much as you possibly can and read the work of people that you respect. Networking is incredibly important and follow a whole bunch of people on Twitter and chat to them about their work. Setup a blog where you’ve got your own work on it and tweet that out and see how you go from there. I think it’s a highly competitive field and you really do need to have a point of difference. So I think having a point of difference is important as well as being incredibly passionate about writing.

Great advice and of course … make sure you proof read your work!

<Laugh> That’s true and having a good subeditor is important but if you are editing your own work, there’s a couple writing aids you can find online that help you pick up the errors you might have missed. Pro Writing Aid is really good if you’re in a high pressure high stress situation where you’re pumping out article after article because it makes proof reading difficult, especially under pressure. So if you don’t have a subeditor around to proof read your work, Pro Writing Aid is what I use.

So how did you become involved in the awesome live video game show called Bonus Stage?

I’m so happy to be involved in Bonus Stage! I done a radio segment with Carlo (Ritchie), one of the presenters on Bonus Stage and also done a few things with them in the past. So when the guys from Bonus Stage (Carlo Ritchie & Ben O’Brien) approached me and said “We’re thinking of doing a live video game talk show, is this something you’d be interested in?”, I was like are you kidding me? This is the stupidest question anyone has ever asked me <laugh> and I would love to be part of this! 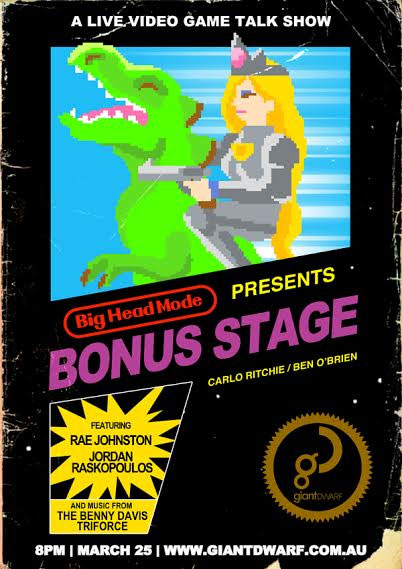 Tell us a little about your segment in Bonus Stage?

My segment kind of evolves all the time which started off as a news piece and then became a general chat thing. This month, we’re doing something completely different again as I like to mix it up because otherwise I get a little stagnant and bored. So the guys are very accommodating in allowing me to switch around what I do and this month I’m working on a quiz type show thing which should be interesting.

Regrettably for people in Melbourne, Sydney is the Mecca of video gaming in Australia (except that we have PAX) but the companies are based there as is the scene. Have you guys thought about doing shows in Melbourne or at PAX?

We’d love to tour Bonus Stage which would be amazing and we may have some plans up our sleeve for PAX this year but we have to flesh out the details and let you guys know. PAX is also my favourite convention ever… for me, PAX feels like a giant video game party that has a great atmosphere. It’s also the only convention where I don’t cosplay so I can relax and not worry about my costume falling apart or how uncomfortable I am. So yeah, I’m really looking forward to PAX this year!

You mentioned cosplay Rae and you’re also Australia’s very own Wonder Woman when it comes to that character. So what drew you to Wonder Woman?

Wonder Woman is amazing and is my role model. You know how people have what would Jesus do? I have what would Wonder Woman do? I think her character is everything I would want to be in a person and she is compassionate and not just physically strong. She is mentally and emotionally strong and has an incredible sense of justice. She always looks for the good in people and tries to draw that out. You’ve got a lot of characters in comics that go the violence route first but she doesn’t. She tries to get the truth out of the matter and I admire everything about her and how she holds herself as a woman. She’s also a feminist icon and a legend.

Tell us a little about cosplaying Wonder Woman? What do you feel?

It’s awesome! My favourite part of cosplaying Wonder Woman is when I run into little girls because I think we’re living in a society and culture that involves taking the perfect selfie and there’s this unhealthy obsession we have with celebrities. These celebrities are human and have faults like all of us. Some are not the greatest role models for kids to look up to either and it also doesn’t help with the internet and this celebrity culture that many of us embrace.

However to have someone like Wonder Woman be a role model for little girls is so important because how positive she is. Being able to go to a convention as her and have these little girls come running up to me and just saying “Hi Wonder Woman” because they think I’m her is so awesome and there’s no way that I would shatter that illusion. They’re shaking and saying things to me like I want to be just like you when I grow up… to have that kind of person to look up to and provide that in real life for those kids is just so empowering and a great feeling. It also feels good to do good! 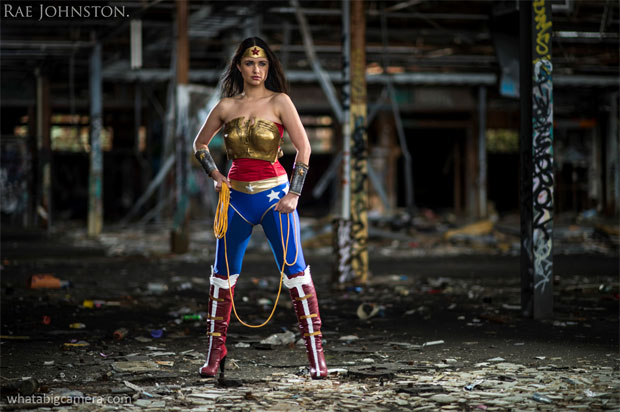 Do you read the current comics?

I do read the current comics Sensation Comics Featuring Wonder Woman but I do fall behind. I’ve actually got the DC Comics app on my phone and iPad and I’ve actually been reading through the back catalogue of Wonder Woman that I didn’t have access to growing up. It’s really awesome to see some of the older stories that I’ve missed out on and it’s really good for cosplay references because you can just take a screen shot <laugh>.

So what’s your favourite era of Wonder Woman?

Both Nicola Scott and Tom Taylor are fan favourites at conventions here in Australia, do you ever catch-up with them?

I see Nicola at a lot of the conventions and she’s a great person plus her artwork is amazing. As I’ve been touring with Oz Comic-Con this year, I get to see both her and Tom at most cons and they’re wonderful warm people, always really open to talk about the characters they’re working on. With Nicola, you can tell that she really loves Diana and she wants to do her justice in the way that she draws her which is feminine and strong. It’s wonderful and I love her work.

What’s your next Wonder Woman Cosplay and planned for 2015?

My next Wonder Woman cosplay is actually the Linda Carter TV series Wonder Woman. It’s kind of like the Holy Grail Wonder Woman cosplays for me and this will be the first time that I’ve said to someone else, “Do you know what? I think that your incredible and I want you to make this costume for me” because I can’t make a bunny suit. I’m happy making all the armour and the leather but not the bunny suit. So I’ve got Abby from Team Nostalgic making the suit for me and she has the neatest sewing that I’ve ever seen in my entire life which is why I asked her.

She’s also a huge Wonder Woman fan and now has the honour of crafting my Linda Carter Wonder Woman cosplay, while I’m working on her tiara and cuffs. I’m hoping to have ready in time for Oz Comic-Con in Brisbane or Sydney. I’m redoing my punk Wonder Woman because I’m not totally happy with it and I’ve also destroyed by current wig which has been worn to death. It’s a matted net of black knots which is horrible but I’m going to try and twist it into a really cool punk style and get together with other punk characters like The Joker <laugh>. 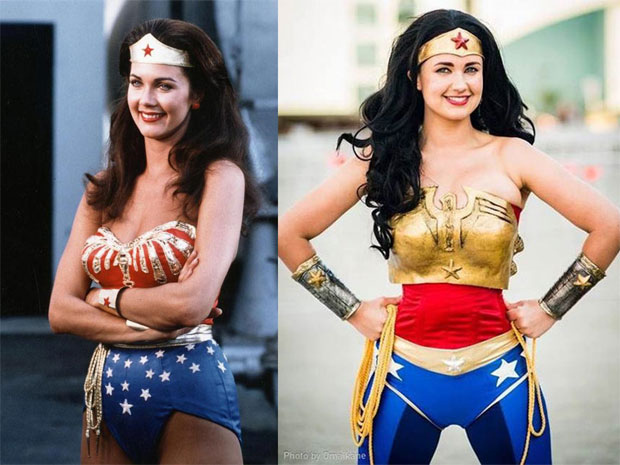 So with all your writing, presenting, cosplaying and gaming (I probably missed another 1000 things), you sound really busy. So how does the rest of 2015 look for you?

I’m continuing to host the Australian Championships of Cosplay at Oz Comic-Con and I’ll probably pop along to SMASH! because my son’s a huge anime/manga fan and he’ll be cosplaying there. Other than that, I’m doing the 9 to 5 at Lifehacker, Kotuku, Gizmodo, Pop Sugar and Business Insider who all operate out of the one same office. So my writing work will be a big focus for me for the rest of the year and of course Bonus Stage and PAX!

Thanks for your time Rae and we can’t wait to see your Linda Carter Wonder Woman cosplay!

To find out more about Rae, please visit http://raejohnston.com/