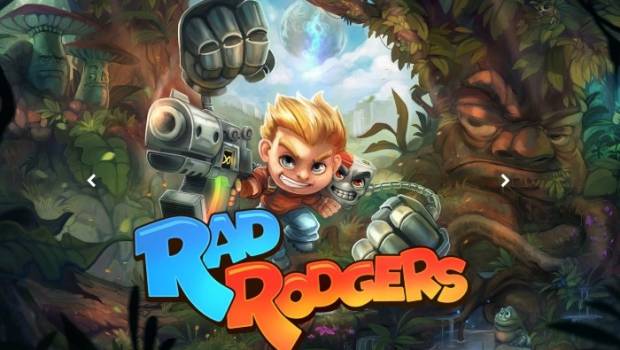 The original 2016 Kickstarter campaign created by Interceptor Entertainment (now known as Slipgate Studios) describes the developer’s vision for Rad Rodgers as “an action-packed 4th-wall busting 3D side-scroller inspired by the precision platformers of the 90’s…”. The campaign significantly exceeded its $50,000 goal, with almost 4000 people backing the project to revive this long-forgotten genre pioneered by classic franchises such as Commander Keen and Jazz Jackrabbit. After having completed the final product, it seems that a strong sense of nostalgia for these aforementioned classic franchises will help you to overlook the many faults of Rad Rodgers to find an enjoyable, challenging and short-lived action-platforming experience. 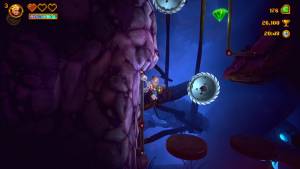 The story follows the misadventure of Rad Rodgers, a plucky young lad that gets sucked into the video game world on his TV. With the help of his “good-hearted but foul-mouthed” sentient game console (voiced by Jon St. John), Rad must make his way through eight levels of challenging run-and-gun platforming to meet a sentient tree for some reason. It’s a pointless story, which is made all the more confusing as the game comes to a suspiciously abrupt ending after beating the first world. 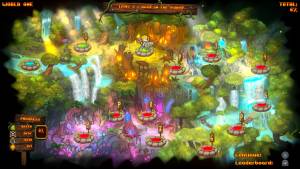 Thankfully, the story (and cringe-inducing attempts at humour) is easy to ignore and the platforming gameplay is the real star of the show. For those familiar with the 90’s run-and-gun platforming genre, Rad Rodgers does a fairly decent job of replicating this style of gameplay whilst adding a few modern elements.

The main objective of the game is to locate four ‘exit chunks’ placed throughout each level before proceeding to the exit. Most levels aren’t designed to be simple ‘run from left to right’ affairs; rather they are designed as a number of interconnected segments of platforming challenges. This adds a sense of exploration and cartography to the gameplay, which makes the levels a bit more interesting to go through, but can also lead to frustrating amounts of backtracking, as there is no level map to refer to. For example, you may find a key at the end of a tough platforming section, but if you don’t remember where the door that fits the key is located, you’ll have to backtrack through multiple platforming challenges to find the corridor that leads to the door. 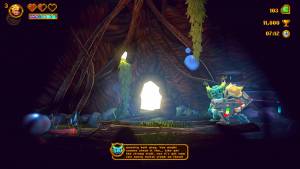 Adding to this frustration is the game’s poor platforming physics in certain situations. Regular running and jumping feels good, great even. With agile movement and a nice amount of jump control, leaping from platform to platform is plenty of fun. The problems arise when Rad is required to interact with obstacles such as swinging ropes, climbable poles or conveyer belts. The physics in these situations feel poorly implemented and unpredictable – not something you want from a precise action platformer. 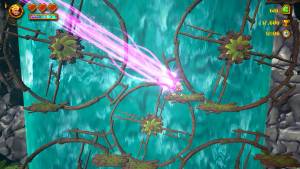 The game reaches levels of borderline intolerable frustration when these elements are combined with combat. Rad is equipped with a regular blaster that can be upgraded with a variety of limited-use ammunition types scattered throughout the levels, all of which feel powerful and are fun to use under normal circumstances. Yet despite these upgrades, enemies consistently feel like idiotic bullet-sponges. Basic enemies will be stunlocked to death under a barrage of regular bullets, whilst the more powerful enemies can withstand plenty of damage from the game’s most advanced weaponry. You can imagine the frustration of trying to jump between conveyer belts, whilst also trying to kill bullet-sponge enemies in your path. 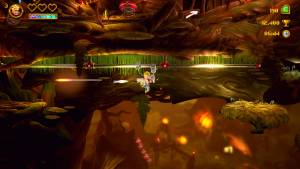 Yet these issues pale in comparison to the truly awful mandatory ‘Pixelverse’ sections placed throughout the levels. Your foul-mouthed sidekick Dusty will be required to enter the Pixelverse at various points of the level in order to generate platforms necessary to progress or to unlock doors. Entering the Pixelverse puts the player in control of Dusty and tasks you with navigating literal mazes full of hazards, with the occasional god-awful timed puzzle that requires you to connect nodes using your available health. These sections are obviously designed to provide respite from the platforming gameplay, but they end up feeling like tedious distractions that completely ruin the flow of the game. 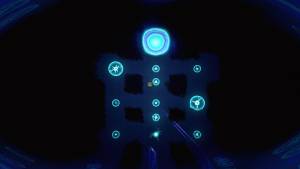 On a more positive note, the game looks great. Every level is dense with visual detail and unique characteristics, which makes them fun to explore and a real delight to play through. Though they all seem to be variants of a consistent jungle/forest theme that is the backdrop for World One. The music is also quite good, with quick tempo synth beats (which immediately reminded me of Jazz Jackrabbit 2) underscoring the action and matching the frenetic gameplay. 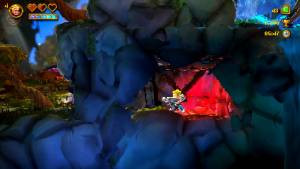 There are plenty of collectibles hidden throughout the world, including a variety of hats that Rad can wear in-game. Hunting down these collectibles provides a significant challenge on top of what is already a fairly difficult game, which pads out the three hours or so that it takes to simply reach the end of each level. Plus there are a handful of bonus ‘pogo’ levels to master, which are simple platforming levels with unique jumping mechanics. 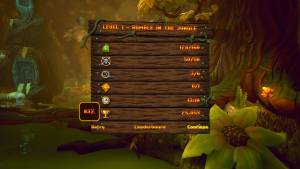 Despite a number of intensely frustrating elements, I enjoyed my time with Rad Rodgers. The challenging platforming sections coupled with the run-and-gun gameplay and exploration for hidden collectibles immediately reminded me of the dozens of hours that I put into Jazz Jackrabbit 1 and 2 on the PC, and I think this sense of nostalgia helped me push through the multiple frustrating sections that made me want to walk away from the game. If you also have a sense of nostalgia for the bygone era of 90’s run-and-gun platformers, or if you’re just a fan of tough, exploration-based platformers, Rad Rodgers is worth a look.