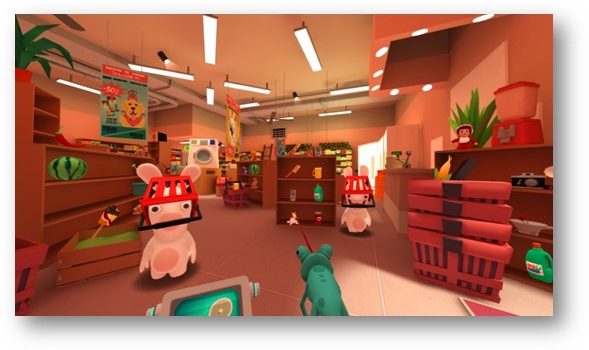 SYDNEY — April 18, 2017 —Ubisoft® Has announced that Virtual Rabbids: The Big Plan, the first Rabbids VR experience on mobile, is now available on Daydream, Google’s platform for high quality mobile VR, in the US, UK, Germany, Australia and Canada.

In Virtual Rabbids: The Big Plan, players will embark on an unexpected adventure within the crazy world of Rabbids to help save the planet. In fact, a few irreverent Rabbids have stolen and scrambled a top-secret nuclear safety password. Players are thus called upon by a classified government agency to travel through different locations to recover the missing digits in a hilarious adventure.

With the Daydream headset and controller, players will solve puzzles and accomplish various missions using wacky gadgets and toys. All five levels provide unique gameplay requiring keen observation, mimicking skills or careful timing. The Daydream controller offers an immersive and natural gameplay experience, allowing players to interact within the virtual environment in the same way that they would in the real world.

This Rabbids VR experience for mobile, developed by Ubisoft Montpellier in collaboration with Ubisoft Bucharest, is based on the Rabbids franchise, which has sold more than 14 million videos games worldwide and is featured in a television show that airs in more than 110 countries. For more information about Virtual Rabbids: The Big Plan, please visit rabbids.com.