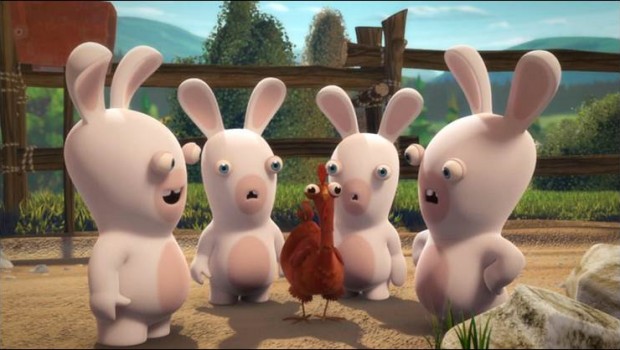 RABBIDS® INVASION IS COMING TO GO!

The Rabbids Invasion TV series created by Ubisoft Motion Pictures has already been broadcast in several territories including the US, UK, France and Germany.  Since launching in 2013, the hit TV show has already been viewed more than 280 million times worldwide*.

Rabbids Invasion follows the silly adventures of these curious little creatures that have invaded earth and are wreaking havoc everywhere they go in the human world! Oblivious to the basics of life on Earth, the Rabbids have hilarious interactions with ordinary everyday occurrences.

Last year Ubisoft released the Rabbids Invasion: The Interactive TV Show video game. This newcomer to the fun and wacky franchise is now available for Kinect on the Xbox One and Xbox 360, the all-in-one games and entertainment system from Microsoft, and PlayStation Camera for PlayStation® 4 computer entertainment system. Kids can jump into a selection of 20 episodes of the popular TV show and participate in the action on-screen offering players the unique opportunity to rediscover their favorite TV show in a brand new and innovative video game.

For those with smartphones or tablets the Rabbids are also available on your iOS device in Australia and New Zealand. Kids can mimic the Rabbids through fun-filled activities using touch, gyro and voice controls.  Rabbids Appisodes features 7 episodes to discover, with the first episode available free.