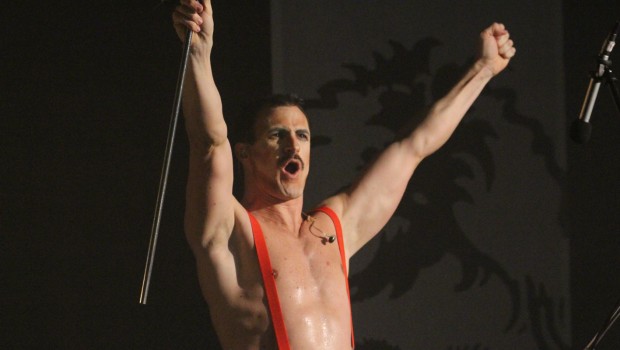 After a hugely successful tour in the USA, Queen – It’s A Kinda Magic will arrive in Australia in just four  weeks to begin its nationwide tour on September 9 2014.
Queen – It’s A Kinda Magic will present fans with the opportunity to re-live Queen as the band was in its  classic days. This stunning re-creation of the 1986 ‘We Will Rock You’ tour features Giles Taylor as Freddie Mercury at his charismatic best.

Taylor landed the coveted role of Freddie Mercury following extensive worldwide auditions – Showtime Australia spent 18 months searching for the right person. The competition was fierce but Taylor’s natural talent as a pianist and his three-and-a-half octave vocal range saw him beat many other sensational candidates. In Taylor they found someone who not only has an incredible voice, is an accomplished pianist and looks the part – he also has the charisma and stage presence to make audiences really feel like they are watching Freddie Mercury.

Giles Taylor said, “Playing the character of an icon such as Freddie Mercury, who is not only known for his outstanding musical ability but also for his flamboyant personality both on and off-stage, is not only an honour but a fantastic and continual challenge. I am especially looking forward to performing to an Australian audience. Australians are renowned for their appreciation of classic rock music and having performed in Australia before I know how receptive and appreciative the audience can be. Queen – It’s A Kinda Magic has been embraced by audiences worldwide: now it’s Australia’s turn”. With a brand new cast of performers, Queen – It’s A Kinda Magic will entertain new and old fans alike with its eerily perfect renditions of the band’s greatest hits. The much loved theatrical creation and full concert experience will include over 20 of Queen’s most loved songs.

Freddie Mercury’s former personal assistant of 12 years and biographer, Peter Freestone, was so impressed with Queen – It’s A Kinda Magic that he has not only endorsed the show but he now travels with it, acting as a consultant and meeting fans when his schedule allows. Freestone only spent three weeks away from
Mercury in 12 years so there are few people more equipped to help Taylor fine tune and finesse his performance.

Freestone said, “Giles Taylor has got Freddie under his skin now and is mesmerising the crowd. I know the Australian audiences enjoyed the shows before and I can guarantee they will want more of the lights, sound and costumes of It’s A Kinda Magic.” Taylor will be joined by Richie Baker as Brian May on guitar, James Childs as John Deacon on Bass and Kyle Thompson as Roger Taylor on drums.