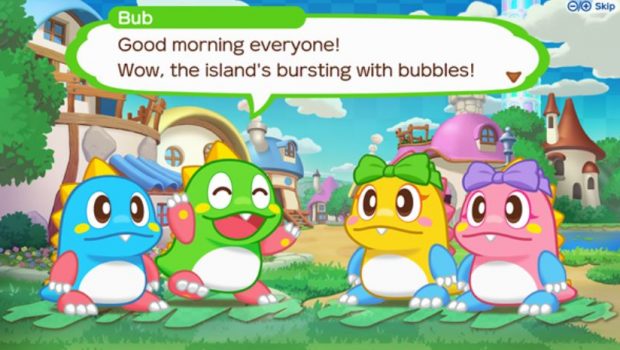 Puzzle Bobble Everybubble! to get a Western release in 2023

ININ Games is happy to announce that they will bring Puzzle Bobble Everybubble! to Western fans in 2023. The newest entry in TAITO’s universally-beloved series was just unveiled in Japan, in time for the birthday of Bub (26 August) – the cute green bubble dragon star of the series. Puzzle Bobble Everybubble! is coming exclusively to Nintendo Switch and will be the first game to feature a story mode playable with up to four players.

In the story mode, players tackle stages on Rainbow Islands, the setting for the new game. Each puzzle section is complimented by a story intermission featuring the bubble dragon protagonists, showcasing their unique personalities more than ever before. To clear each stage, players need to remove bubbles by connecting three or more of the same color – either on their own or with the help of fun and entertaining items and gimmicks. Additionally, for the first time in series history, fans will be able to enjoy story mode with a total of up to four players. So grab your controller and join your friends on an adventure through Rainbow Islands!

The story of Puzzle Bobble Everybubble! brings Bub, Bob, Peb, and Pab to Rainbow Island, where Miniroon, a mysterious character similar to Bub lives. One day, Miniroon suddenly starts to emit a large number of bubbles, covering the whole island and causing problems for its residents. Time for our four friendly bubble dragons to step in and help Miniroon, whose bubble-blowing is bad news for the island!

Puzzle Bobble (a.k.a. Bust-A-Move) is an action-puzzle game where the brothers Bub and Bob, who have been transformed into bubble dragons by a wizard’s spell, go on a bubble-bursting adventure. The classic gameplay formula is simple but addictive: using various items and gimmicks, connect three or more bubbles of the same colour to remove them from the field and progress. A spin off from the 1986 arcade hit Bubble Bobble, Puzzle Bobble/Bust-A-Move has seen over 20 series titles across countless platforms since its 1994 debut. As the sole owner of Bubble Bobble and Puzzle Bobble’s worldwide IP including copyrights and trademarks, TAITO will continue to expand both properties going forward.

Additional information about Puzzle Bobble Everybubble! will be announced at a later date.