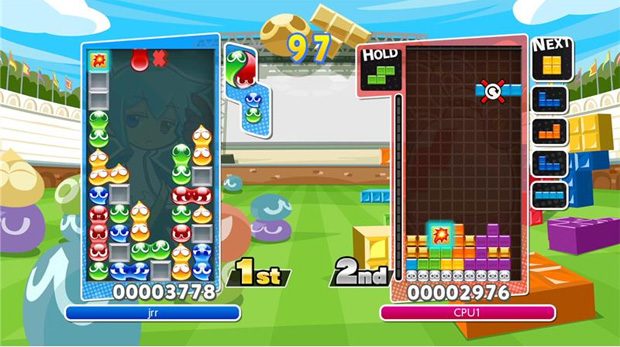 Get ready to stack, match, and clear colourful objects like you’ve never done before, because Puyo Puyo™ Tetris® is now available in Australia. Tetriminos and Puyos collide, with players being able to frantically stack and clear by themselves or compete head-to-head with friends. The game has a variety of modes for puzzle fiends — from single-player Adventure and Challenge modes to ferocious competition with up-to-four player Arcade modes — for tons of Tetris/Puyo variety. There are many match types that will challenge even the most grizzled puzzle game veteran.

Here’s a quick rundown of all the different ways to play:

Adventure – Single-player mode offers ten unique acts, each with ten stages featuring different characters from the Puyo Puyo and Tetris universes. Each stage contains unique challenges players will need to overcome in order to win and move on!

Online – Players can try their puzzle skills on a global scale by playing any of the multiplayer modes with up to four players online in Puzzle League or Free Play modes.

Solo Arcade – Play any of the Multiplayer Arcade modes against the CPU in Battle or Endurance matches, or try single-player challenges: