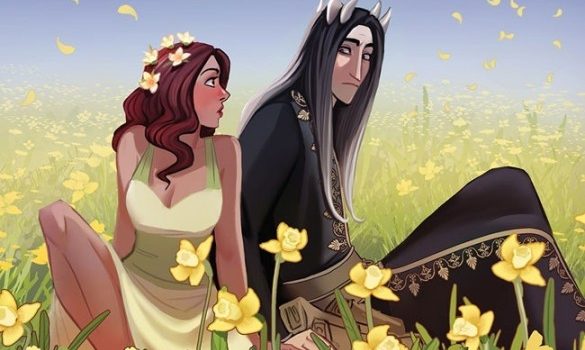 Summary: A great introduction to the comic series. Excellent artwork and characterization as the writer explores the Greek mythological story between Hades and Persephone.

Punderworld Vol. 1 comic explores the Greek mythology love story between complete opposites, the god of the underworld, Hades, and Persephone, the earth goddess of growth. Writer Lind Sejic sets the foundation of their relationship through ironic comedy, great artwork and characterization.

In the story, Hades is shy and keeps to himself most of the time. Hades’ illustration contrasts previous ones where being the ruler of the Underworld has some negative implications to his name. His shyness influences the narrative where he cannot directly approach Persephone and is afraid of her mother’s overbearingness. On the other hand, Persephone is illustrated as happy, spirited, and rebellious, and the two have been crushing on each other for over two hundred years. In much of the comic, her actions are largely influenced by her mood, and she is always rushing to do things without thinking much about her actions. The only hindrance to their relationship takes the form of Persephone’s mother, Demeter, who is overprotective of her daughter. In most of their conversation, she seems to be downplaying Persephone’s perception of romance and only gets vexed when questioned about Olympus. Zeus also plays a crucial role in the comic where his actions and mischief encourage, or rather forces, Hades to think about confronting Demeter and asking for Persephone’s hand in marriage.

Punderworld Vol. 1 excels at its comedic aspect, where Hades’ introverted personality completely contrasts with Persephone’s. This contrast is explored further through the comic’s artwork and colors. On the one hand, the color scheme of Hades’ underworld follows his personality, where the dark background is metaphorical to his introverted side. On the other hand, much of Persephone’s personality is illustrated in the conversation with Demeter and the interaction with Hades and changes depending on her mood.