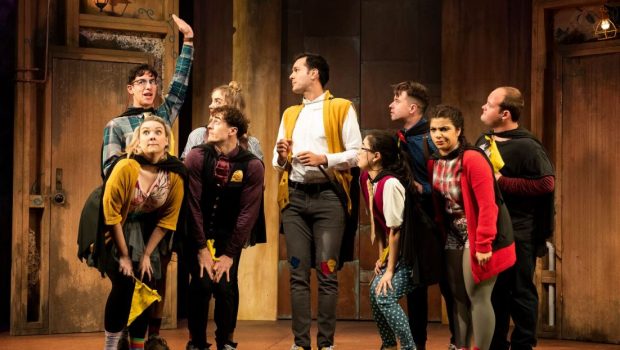 *Suitable for those aged 8 and above

If imitation is the highest form of flattery then parody must be a close second because Puffs or: Seven Increasingly Eventful Years at a Certain School of Magic & Magic is the Harry Potter spoof play every hardcore fan needs to see. The Off‑Broadway play is told as an over the top love letter to Hogwarts and all its students. It tells the hero’s story from the perspective of the underdog.

Hufflepuff (or just ‘Puffs’ here) is the house team that is lost among the bitter feud between the heroic Gryffindor and the snakey Slytherin. Puffs turns its weaknesses into its strengths by making fun of the fact that they cannot actually use any of the names from the book and film series for legal reasons. Hence, Gryffindor is dubbed ‘Brave’, Slytherin is ‘Snake’, Hufflepuff is ‘Puffs’ and so on.

Puffs is essentially a hero-adjacent story. While Harry Potter undertakes his magical adventures, the play focuses on Wayne (Ryan Hawke), a grown man playing the role of an eleven-year-old boy wizard. Besides the inside jokes, most of the comedy lies in the physicality of the actors. Hawke’s cherub face and wardrobe of band t-shirts make for an already hilarious main character to follow, and it is also beneficial that he’s also a competent actor. 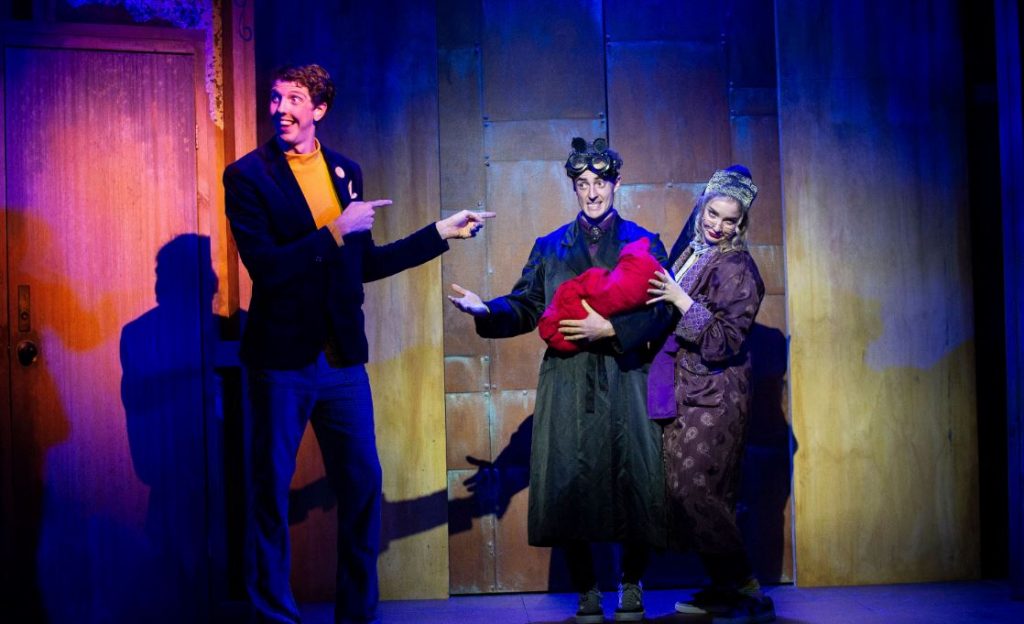 Puffs tells the inverse story to Harry’s years at the magic school of Hogwarts. We are given a group of two boys and one girl to follow on their journey to making the most forgettable house team a memorable one. ‘Third or nothing!’ they yell before they start the school year. Wayne is accompanied by Oliver (Adam Marks), the screechy Aussie version of Ron Weasley whose sole purpose is it to avoid dying and hopefully learning some math over the next seven years.

Then there’s Megan (Angelina Thomson), the play’s answer to Hermione. Megan takes a note out of Kylo Ren’s playbook and tries to be as menacing and dark as one of her infamous family members. She scares and bosses the two boys around with her intense stares and interesting eye makeup.

Director Kirstin McCarthy Parker utilises the medium-sized stage to accommodate all her actors. The pace is fast and silly as performers jump in and out of scenes through one of four doors, often changing costume and character as they come and go. Gender, age or race don’t come into play here as the actors take on some iconic characters. 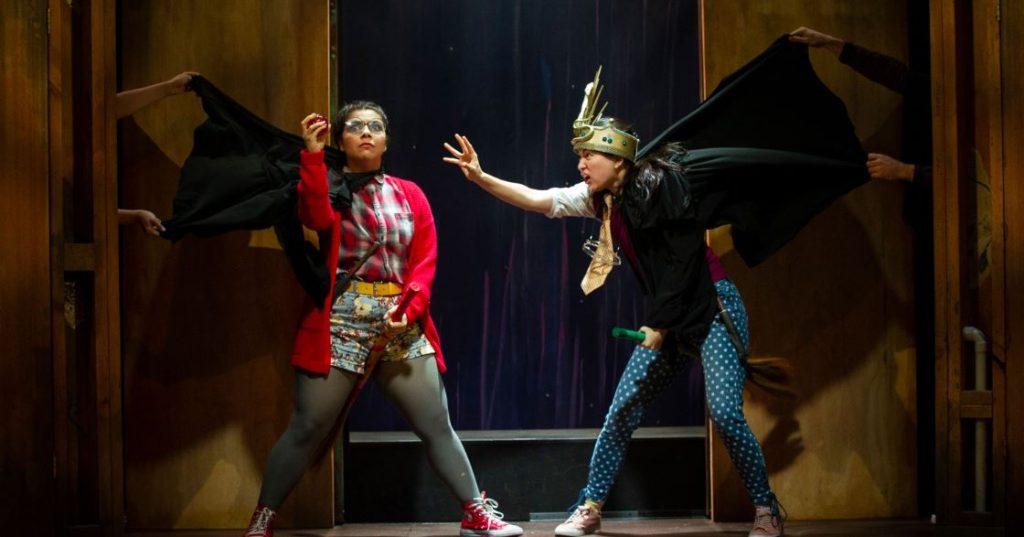 Matt Whitty and Annabelle Tudor both take turns at playing The Headmaster (no character names or J.K.’s lawyers will come knocking) with immense success. Whitty’s spot-on impersonation of Snape (oops, sorry lawyers) is not only one of the major highlights but also proves that it’s not only the audience who is in love with the magical franchise.

You can feel the love for source material coming from both the crowd and performers. Still, this play is extremely niche as the jokes and references will soar over the heads of the uninformed like a majestic Hippogriff. The story moves contiguous to the ones in all the Harry Potter films and books, meaning it helps to brush up on your Hogwarts (again, sorry lawyers) knowledge.

Depending on how many drinks you had during the intermission the second act’s loud silliness will become either annoying or infectious. It’s hard to hate on a play that’s so full of love and dedication to a global pop culture phenomenon, especially one with crowd participation. 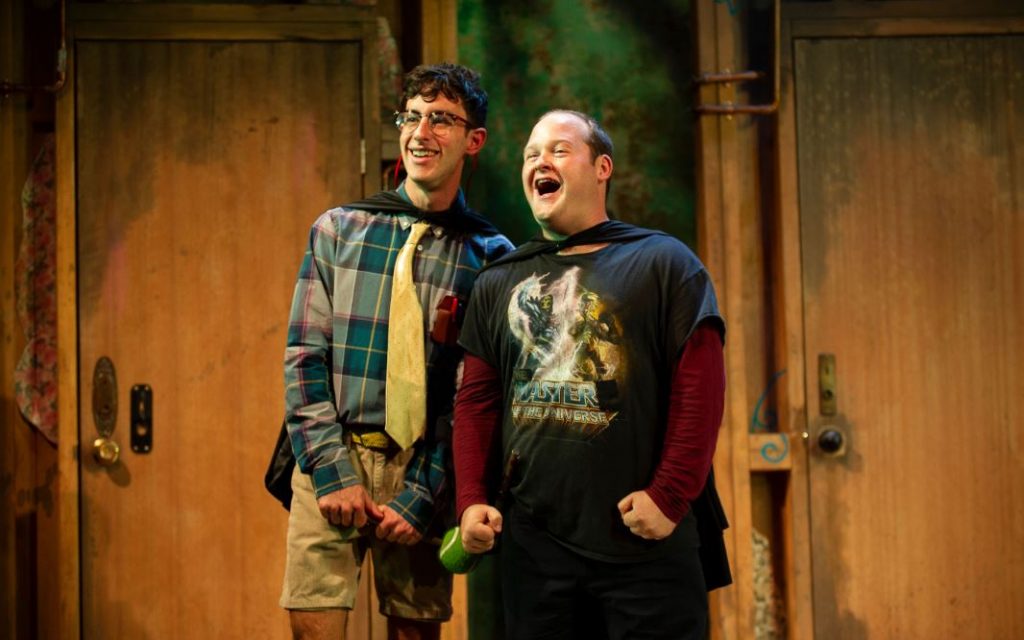 James Bryers shines in the roles of the heroic Cedric and Volde…the one who should not be named. The latter role sees Bryers among the crowd, donning a swimmer’s robe and cap, and demanding the audience to take part. All the cast members shine throughout the play. Gareth Isaac guides the audience as the Narrator and this guidance offers treasured moments throughout the show.

Kimie Tsukakoshi is a quiet (and sometimes loud) achiever as she, and the rest of the cast, switch characters as comfortably as changing filters on an Instagram post. Accolades go to all the behind the scenes props and costumes people who must be working double time in order to achieve the high turnover of actors and characters. Kudos to the props department too for creating such wonderful and imaginative ways to immerse the audience into another realm.

Puffs or: Seven Increasingly Eventful Years at a Certain School of Magic & Magic is a wonderful and funny homage to Harry Potter. Much like someone giving their best friend a hard time during a loving birthday speech, the play knows when to pull its punches. Although one too many red head jokes comes off a little mean-spirited. 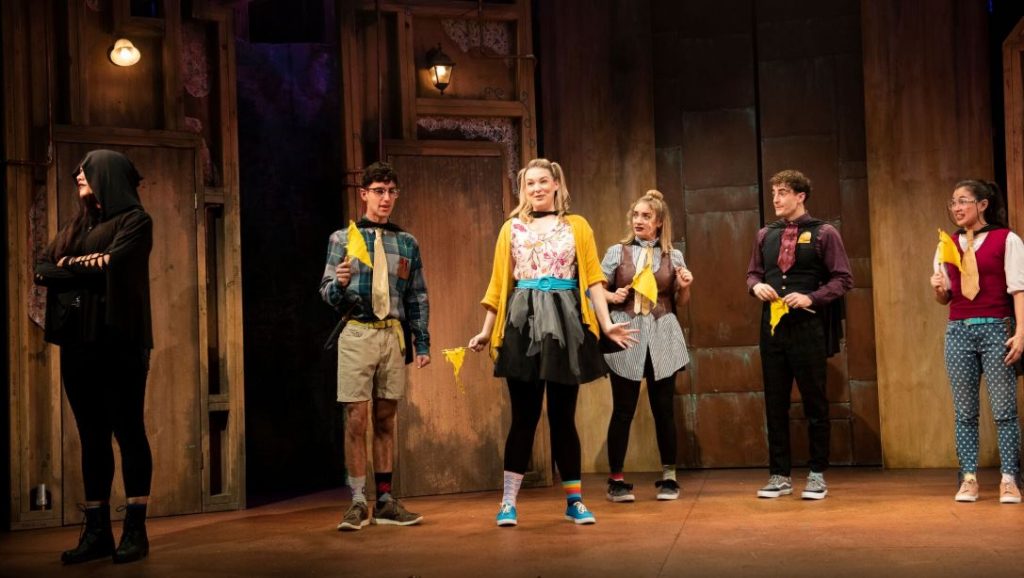 Poking fun at Dumbledore’s actor change halfway through the movie series is brilliant. Cracking jokes about Harry’s forever-winning streak is priceless. Assigning Snape as the ‘magic sex ed teacher’, yes please! Fans of the books and movies will appreciate every detail that this amazing cast and crew have put on show, while fans of Hufflepuff might be content that they’re finally receiving some recognition. First place indeed. 50 million thousand house points to the Puffs!

Puffs or: Seven Increasingly Eventful Years at a Certain School of Magic & Magic is running from the 23rd of May to the 30th of June 2019.

Summary: Puffs or: Seven Increasingly Eventful Years at a Certain School of Magic & Magic is a wonderful and funny homage to Harry Potter.