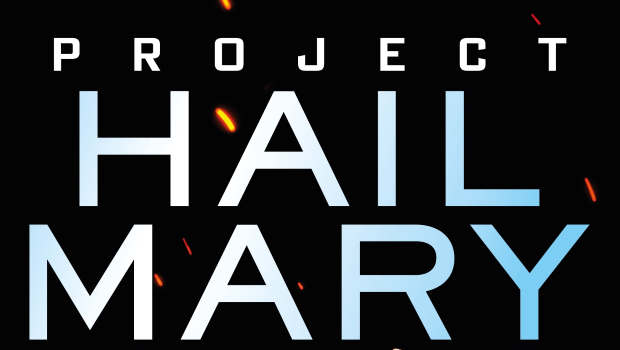 Summary: Earth's only hope for survival wakes up on a space ship with two dead crew mates and no memory of who he is or what he is doing... can he figure things out before it's too late?

It must be very stressful to have a massive hit. Imagine having a hugely successful book that then becomes an equally successful film, the pressure to produce another hit must be quite crushing. I’m not sure if Andy Weir took it in stride… but I do know he has managed to make a very compelling story that is a great read from cover to cover.

I feel like a bit of jerk for not giving this 5 our of 5… but I want to explain why before getting into this any further… because the take away from this should be that you should absolutely get this book! There are two elements of the story that I felt “let it down” (and even saying that feels a bit strong). I am going to try and do this without spoiling anything, so I will say that there are two characters that show up mid to late in the book… we know their fate (given their roles), so they were always going to be hard to introduce and then explain their fate. I don’t really have an issue with their final moments… but their personalities seemed a little “cartoonish” or over the top. But I want to add a huge caveat here… I’m not sure if I have met people like them myself… but I am near certain there are people who behave the way they do and so I don’t claim they aren’t believable characters… just that they seem out of place with everyone else.

The only other point that I felt pulled the curve down a smidge is the end. Not that I have an issue with the end… but it felt a bit rushed. Having said that, I don’t know there’s any other way you could tackle it… and when you’ve gone past 450+ pages… you have to write “The end” somewhere.

But as I said, the takeaway here should be that this is a book you have to read. I will admit that I have yet to read The Martian… but I thoroughly enjoyed the movie and appreciated the “serious science” approach to it. Reading that Project Hail Mary took the same approach… to use real science to “ground” the story made me extremely keen to get into it and from very early on it’s quite apparent that this is indeed a science rich book. But it’s important to know that you don’t have to know or even be super interested in science in order to enjoy the story itself and I think that’s also where Weir is such a great writer.

The science is there but it backs up the story, the story still works without the science, it’s just all the more satisfying to know that it exists within the realm of plausibility.

I’ll stick to the book cover version for a quite over view of the story because I don’t want to spoil anything. Essentially we follow Ryland Grace on a mission to save earth. He’s been sent into interstellar space to try and find a solution that will prevent the end of all life on earth… but he can’t remember anything about his mission, or even his own name. With the time frame before earth is completely doomed slipping away Ryland is going to need a lot of luck, science and any help he can get to have any chance of success.

My recommendation is to buy this book for the science, love it for the story and the humour!