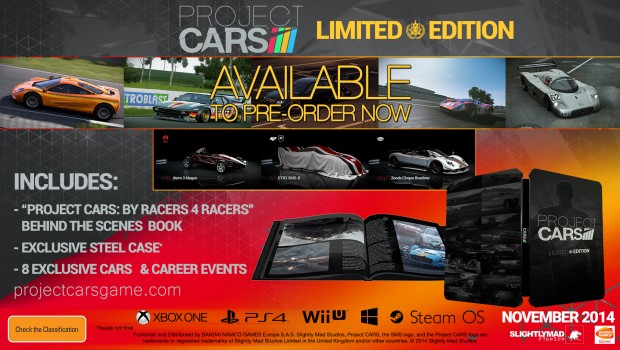 SYDNEY 21ST  October 2014 – Slightly Mad Studios and BANDAI NAMCO Games Europe S.A.S  today announced they will be moving the release of Project CARS for the PlayStation 4, Xbox One and PC to March 19th 2015 across Australia & New Zealand.

The move positions the title away from the competitive holiday scene dominated by household names while affording the team at Slightly Mad Studios additional time to extend and polish their ground-breaking and accomplished next-gen racing experience that’s been created alongside a community of over 85,000 racing fans and real-life professional drivers.

“Our goal has always been to deliver a landmark title that encompasses the wishes and desires of racing fans from all around the world; something with features and content powered by the community that provide a truly unforgettable and pioneering experience” said Ian Bell, Head of Studio at Slightly Mad Studios. “Whilst a tough decision to make, the change in release date allows the game the greatest chance of success and visibility, and the opportunity to polish the game even further to the high standards that both ourselves and our community demand and expect. We’re eager for you all to see what we’ve been working on in just a few months.”

Project CARS aims to deliver the most authentic, beautiful, intense, and technically-advanced racing game on the planet.  Crowd-funded by a passionate community that has been involved in the development process from day-one to create their ultimate racing experience, Project CARS includes the largest track roster of any recent racing game, a huge variety of motorsports to play, a freeform and authentic career mode, world-class graphics and handling, dynamic time of day & weather, and a suite of community features and connectivity that leave the competition behind in the dust.