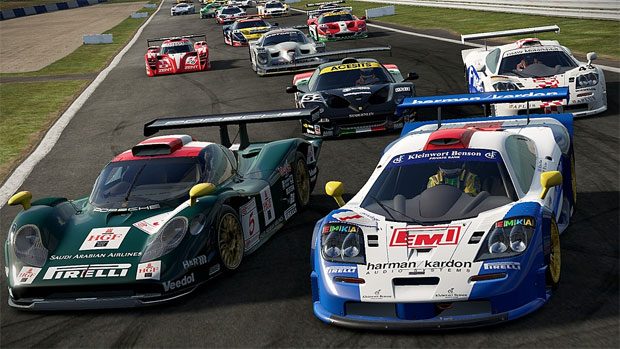 Slightly Mad Studios and BANDAI NAMCO Entertainment Europe are proud to announce the arrival of Ferrari for Project CARS 2.

Ten faithfully reproduced Ferraris will be included with Project CARS 2 when it is released worldwide on 22nd September 2017, on the PlayStation 4 computer entertainment system, XBOX One, and PC.

Ferrari has epitomized motorsports for over 80 years, and comes to the world’s most authentic racing game franchise with a series of historic, classic, and current models carefully chosen to represent the passion, the technology, and the glorious sporting history that defines the brand.

Driving a Ferrari, the dream of any passionate motorsport fan, is now fully attainable in Project CARS 2. Charting half-a-century’s worth of Ferrari’s supreme creations, Project CARS 2 drivers will be able to push these 10 authentically-crafted Ferraris to their astonishing limits.

Beginning with perhaps the most beautiful car ever to have raced, the Ferrari 330 P4 of 1967 (a photo of which was proudly displayed in Enzo Ferrari’s office from the day it claimed total victory at Daytona), through to Ferrari’s modern-day GT warrior, the 488 GT3, and via such iconic Ferraris such as the Ferrari 288 GTO of 1984 (the first supercar to hit the 300km/h barrier), the F40LM of 1989 (the GT version of the first supercar to reach 370km/h), and all the way through to Maranello’s current hypercar, LaFerrari, Project CARS 2 drivers will soon revel in the cars and history that have made Ferrari the world’s most aspirational car brand.

“Curating and selecting Ferraris from over 80 years’ worth of motorsport history was both a challenge and a joy,” said Stephen Viljoen, Game Director on Project CARS 2. “Our fans’ number one request after Project CARS 1 was to bring Ferrari to our game. We’re proud and really excited to have managed to bring this legendary brand to the franchise. Recreating their handling and legendary performance was a top priority for us.”

“Having Ferrari in Project CARS 2 is fantastic news for our drivers,” said Andy Tudor, Creative Director at Slightly Mad Studios. “But it also comes with its own unique set of challenges. With so much pedigree and expectation, getting the feel of these Ferraris right, in-game, was a massive responsibility for us. Fans and drivers of both Project CARS 2 and Ferrari expect something special, they expect the cars in-game to echo all the hallmarks of what it is to drive some of Maranello’s greatest-ever cars. We can’t wait to get our drivers into these Ferraris and let them experience what we’ve achieved. These cars are truly special.”

Project CARS 2 is rated G. The game will be released on 22nd September 2017 for the PlayStation 4 system, Xbox One, and PC. Find out more and keep up-to-date at the official Project CARS 2 website: http://www.projectcarsgame.com/ To learn more about BANDAI NAMCO Entertainment Europe’s other products please go to: http://www.bandainamcoent.com or follow us on Facebook at https://www.facebook.com/BandaiNamcoEU or join the conversation at https://twitter.com/BandaiNamcoEU.