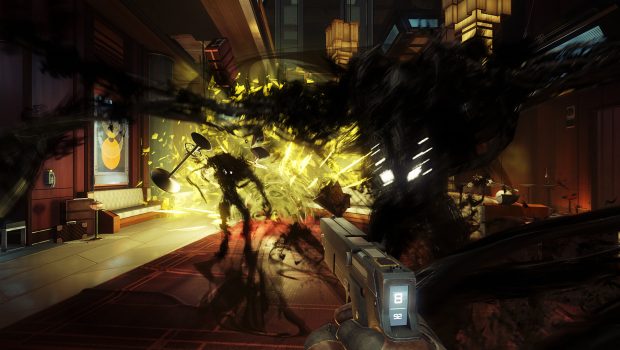 OK, let’s say you have access to futuristic technology – some real heavy sci-fi stuff, like a machine with the ability to produce almost anything you want. What would you create first? A powerful weapon so you can take over the world? A much-needed resource to help your fellow man? Or… ham?

Yes, ham. But not just your ordinary, everyday ham. We’re talking about top-of-the-line cured meat that comes from a special pig that gambols freely through Spain and Portugal while munching on acorns. Y’know… really, really good ham. So good that Creative Director Raphael Colantonio would use the Fabricator from his game Prey to… well, make ham.

Colantonio isn’t the only one on the team at Arkane Studios with a quirky response to this very important question. From weapons to abilities to areas within Prey’s alien-infested neo-deco space station, the developers share their favourites – and along the way, reveal some secrets about their game… and themselves. Watch our video to find out even more about Prey – and the people who made this critically acclaimed game:

Now available as a free trial on PlayStation 4, Xbox One and PC, Prey is a mind-bending sci-fi adventure that some critics are already calling the “best game of 2017.”

In Prey, you awaken aboard Talos I, a space station orbiting the moon in the year 2032. You are the key subject of an experiment meant to alter humanity forever – but things have gone terribly wrong. The space station has been overrun by hostile aliens and you are now being hunted. As you dig into the dark secrets of Talos I and your own past, you must survive using the tools found on the station, your wits, weapons, and mind-bending abilities.