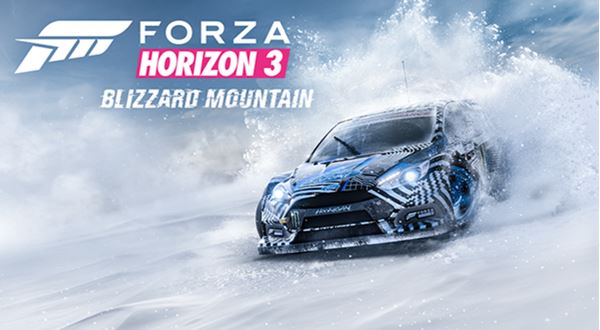 Prepare for a Wintry Forza Horizon 3 Adventure with Blizzard Mountain

Get the snow tires ready and pack your best parka, because Blizzard Mountain beckons! The Blizzard Mountain Expansion for Forza Horizon 3 is coming Dec. 13 and bringing with it a Forza first – snow, ice, extreme elevations and blizzards to challenge players in their quest to become the King of the Mountain. Set amidst extreme alpine settings, players will explore a snowy mountain playground in eight new vehicles – including the 2016 Ford GYMKHANA 9 Focus RS RX – all in brand new race events that have been specifically designed for spectacular mountain racing.

Become King of the Mountain
This brand-new campaign challenges players to compete in a series of thrilling events with the ultimate goal of becoming the King of the Mountain. With more than 50 new events and challenges to compete in, the expansion tests drivers’ skills across extreme weather and brand new race types, including Hill Climb, Descent and Blizzard race events. In addition, players will be able to take part in new Bucket List, Blueprint and Rivals events, as well as earn 28 new Xbox Live Achievements worth 500 Gamerscore points (head over to ForzaMotorsport.net for the full list of Achievements).

Blizzard Mountain also introduces seven brand new vehicles to the game (plus the aforementioned Barn Find), including the incredible 2016 Ford GYMKHANA 9 Focus RS RX, the 2016 Nissan Titan Warrior Concept, classic rally cars and more. In addition, when exploring Blizzard Mountain, players will be able to choose snow tire upgrades for any of the vehicles in Forza Horizon 3 to prepare them to take on a wide range of thrilling driving surfaces.

Now, here’s a closer look at the new cars coming to the expansion:

2016 Ford GYMKHANA 9 Focus RS RX
The 2016 Ford GYMKHANA 9 Focus RS RX shifts everything we love about Ford’s latest hatchback masterpiece into overdrive. The RX RS is an astonishing 10-inches wider than the Focus RS and features nearly double the horsepower. There are vents, and lips, and flares that all culminate into a form that screams speed. Take a rocket ride through the sequential gearbox and blow through some twisties and find out exactly what makes this car Ken Block’s latest Gymkhana weapon of choice.

1965 Ford F-100 Flareside Abatti Racing Trophy Truck
Long before the tube-frame, fiberglass bodied trophy trucks of today, men (and women) raced real trucks in the desert. The Abatti family has been doing so for three generations and the “Hay Hauler” is a rig that changed the face of desert racing. Everything bolts or is welded to the frame and there are four shocks per corner, as well as leaf springs, making it much closer to stock than the completely fabricated and engineered trucks of today. Don’t let its age fool you into thinking it isn’t fast though; Robby Gordon has raced this truck in Class 8 and once ended up so far ahead that race spectators thought he was lost when they spotted him.

1975 Lancia Stratos HF Group 4
You can thank Lancia’s competition manager Cesare Fiorio for what went on to become one of the most legendary rally cars in history. Fiorio’s enthusiasm drove the Stratos from first sight as a concept to its Group 4 development. The wedge shape penned by Marcelo Gandini helped establish Bertone as a more than just a custom coach builder. When engine development stalled, a Ferrari V6 was utilized in the mid-engine design. In race spec, the near 300 hp and rally suspension excelled on tarmac or mixed surfaces. Rally Legend Sandro Munari won 17 stages at the San Remo Rally in this car, making the Group 4 racer’s mark in what has become the stuff of rally legend.

1985 Lancia Delta S4 Group B
The Group B rally era took rally car performance to new levels, and the Delta S4 is possibly the most extreme interpretation. What looks vaguely like a hot-hatch is a mid-engine all-wheel-drive car with near perfect 50-50 weight distribution. The engine has both a super charger for low-end grunt and a turbo for near 500 high-revving hp. The S4 set the pace in Group B with drivers Markku Alén and Henri Toivonen. Sadly and historically, Toivonen suffered a fatal crash in the S4 at Corsica that prompted the end of Group B. Despite the loss, the mid-eighties will forever be remembered as a high point in rally racing development, in large part to the Delta S4.

2016 Nissan Titan Warrior Concept
If Nissan actually decides to build the Titan Warrior Concept, the Ford Raptor better get ready for some competition. The Warrior follows Ford’s lead into the desert racing, pre-runner inspired design with more than just a look that calls to adventure. The Warrior is six inches wider than a standard Titan, is powered by a Cummins Turbo Diesel, and has suspension for days. On the outside, the look is all that as well, with flared fenders a cab spoiler and the trim and lighting to make it standout. You can’t yet drive it in the real world, but a test drive in Forza will surely whet your appetite for what we hope will become a reality.

2016 RJ Anderson #37 Polaris RZR-Rockstar Energy Pro 2 Truck
Pro 2 Unlimited trucks are two-wheel-drive race trucks with almost unlimited modifications. Their suspension travel is phenomenal and while only the rear wheels are pushing, the traction they find makes for astounding speed, with opposite lock sliding turns and amazing jumps in every lap. RJ Anderson is climbing the ranks of top drivers and was led in 2016 by only the infamous Rob McCachren in the Lucas Off Road Racing Series. The #37’s killer livery featuring sponsors Polaris and Rockstar Energy makes it look fast, even sitting still, but we doubt you will ever see it doing anything less than flying.

2016 Subaru #199 WRX STI VT15r Rally Car
Rally America is the United States’ premier national rally series and Subaru has been consistently dominant as the motorsport continues to gain traction across the country. The #199 is driven by extreme motorsport and motocross legend Travis Pastrana, who has given Subaru teammate and multi-year Rally America champion David Higgins a run for his money, winning numerous stages throughout the year and taking the win at the 100-Acre Wood event in 2016. This is the factory works racing effort from Subaru in the open class. What that means is there is nothing faster under rally conditions and no effort or expense was spared in building this world-class racer.

And don’t forget to keep an eye out for that mystery barn find while discovering all that Blizzard Mountain has to offer this December.