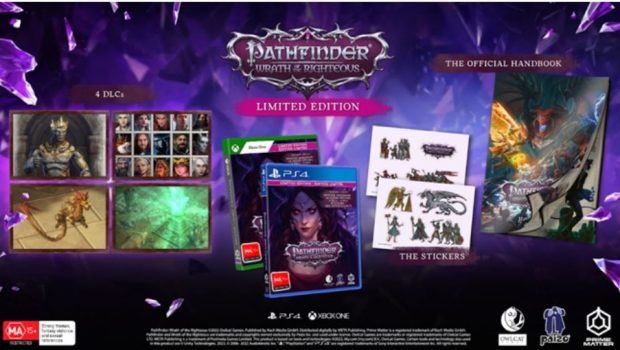 Owlcat Games and Prime Matter today opened pre-orders for multi award-winning, critically-acclaimed Pathfinder: Wrath of the Righteous. PlayStation and Xbox gamers can now place a pre-order, ahead of the epic RPG coming to consoles on 29 September, 2022. PlayStation Plus owners get an additional 10% discount.

The physical edition of Pathfinder: Wrath of the Righteous was also revealed today. This collector’s item will include 4 free DLCs, a set of stickers, and the official printed handbook introducing the universe to newcomers and featuring exclusive artwork.

Pathfinder: Wrath of the Righteous will be available on both physical and digital formats for PlayStation 4 and Xbox One (PlayStation 5 and Xbox Series X / S via backward compatibility); as well as Nintendo Switch via the Cloud.

The Enhanced Edition of Pathfinder: Wrath of the Righteous will become the standard version for the console release, featuring quality-of-life improvements, a photo mode, together with additional high-level content related to several mythic paths and other features and tweaks. All owners of the PC version will also receive a free update to the Enhanced Edition on September 29.

Watch the Pathfinder: Wrath of the Righteous trailer here: