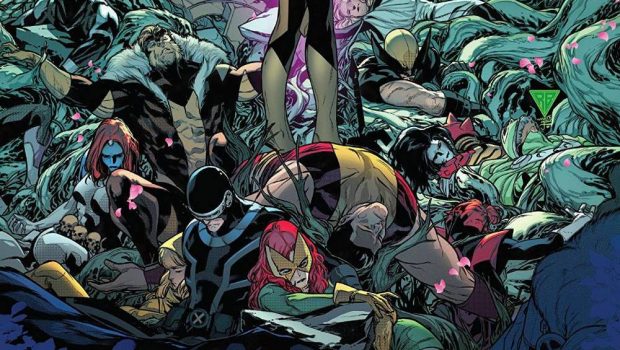 Summary: As HoX/PoX comes to an intriguing end and enters the Dawn of X, Moira X similarly steps out from the shadows and has some light shone on her.

Professor X’s inscription on the opening page of this issue: “And now we build” really speaks to what Hickman is doing and has done with his reimagining of the X-Men. He’s established the new rules, roles and tone. Now, he builds on it.

The overarching focus of this issue appears to be on the machinations behind the scenes of the protagonists of the series. The first reveal comes from The Librarian in the X^3 timeline, where we finally learn his identity and intentions. The series has spent a good deal of time building up the machines as the ultimate enemies of mutants so it’s a fun twist to reveal that the true enemy remains humans, but a scientifically evolved version: Homo novissima. It’s a testament to the  intricate and creative way that Hickman has weaved this portion of the story together that he still finds a way to make a return to the status quo both surprising and interesting. Hickman doesn’t stop there though, as it’s revealed that the X^3 story isn’t in the far-flung future, but the sixth life of Moira X.

Speaking of her, the next reveal comes from the aforementioned and mysterious Moira X. This is the first time the reader sees her in the present and we learn a ton about her plan. Hickman uses his patented text pages to explore Moira’s journal entries. We learn more about her motivations and various manipulations. It wouldn’t be Hickman without leaving some of this unclear though, as several entries are redacted, leaving the reader begging for more. Even more interestingly, Hickman chooses a small piece of the redacted text to leak through, revealing an ominous “I am just as bad as th…” Moira’s entries read like those of a villain, as she is actively manipulating and hiding information from Xavier – at one point even hoping to “break” him. Moira, given the knowledge of her past lives, believes that the mutants will always lose and she desperately wants to hide this information from the world.

Hickman creates a strong bit of dramatic tension as Xavier and Magneto are presented as marionettes breaking free from Moira’s control in this issue. Moira has manipulated them up until this point, but it appears that the two of them have now developed new ideas for how this society shall progress. If her previous lives are any indication, the Moira that Hickman has given us will stop at nothing to prevent that.

The issue opens with the same scene that Powers of X #1 opened with, but it is given new meaning based on all of the information we’ve come to learn throughout the last 12 weeks. R.B. Silva is reusing the artwork from the first issue of this series, but now that we’ve spent some significant time on Krakoa, one can’t help but note the artistic allusions to our current state of affairs. The one new addition to this scene is particularly evocative: a splash page of Xavier casually strolling through the woods and into the familiar carnival. Despite knowing better from the “X^0: Year One” note in the corner of the page, the reader immediately gets the feeling that this is Xavier entering Krakoa. He is framed by lush foliage while the sun shines brightly behind his head (symbolizing the “Dawn”). Most notably, Xavier’s knowing grin which we’ve grown to associate with the Xavier of the present is plastered to his face. He continues to explore the carnival and Silva’s “camerawork” chooses to focus on the freaks and the children, further alluding to Xavier’s future as the new age of mutantkind’s patriarch. It’s amazing what adding one page and a little bit of hindsight does to this scene and it makes the reader appreciate SIlva’s artwork so much more.

Silva and the colorist combo of Gracia and Curiel do an amazing job throughout the X^3 portion of the story in conveying mood. One could read a wordless version of the story and still sense what is happening entirely based on the change in color palette. The scene opens with beautiful imagery of the Librarian’s Preserve, focusing on the vibrant reds, greens and purples. As the tension grows between the Preserve’s inhabitants and the Librarian, the colors switch to an autumn palette, with oranges and browns. Finally, as the Librarian’s dark motives are revealed, the color gradually drains from the page until the Librarian is shrouded in darkness and only his featureless eyes are visible. It is fantastic work, and it all makes for a wonderful bit of visual storytelling.

Hickman does a brilliant job answering some of the audience’s longest lingering questions while still leaving enough information tantalizingly unknown as we enter the next stage in mutantdom. Silva and Larraz combine on art in this issue to great effect – recontextualizing scenes we’ve seen before while also hinting towards an ominous future for our X-Men and their new status quo.