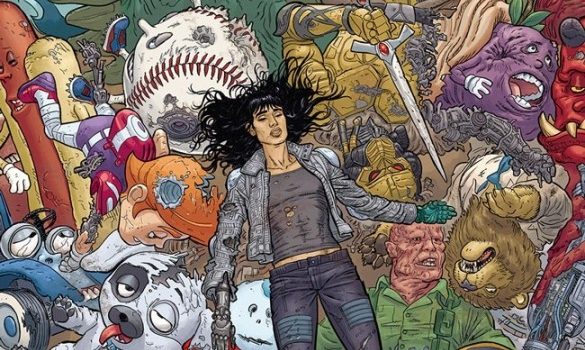 Summary: Worth the read if you overlook the cheesy dialogue, excessive violence, underdeveloped story, and mediocre visuals and artwork.

Post Americana #6 continues the theme of excessive violence from the previous comic as the president explains the necessity of horror and violence as a motivator in a post-apocalyptic America. The comic’s setting soon changes to the fight between Carolyn, her mother, and Mike against two of the monstrous creations. The odds seem to favor the enemies, but the day is saved Eggbert and Floppibottoms, who end up killing one of the monsters. The moment of peace does not last where the whole facility is bombed. The action changes and focuses on Marcy, who is attacking the bunker where the president is. However, she is not alone and seems to be accompanied by an army of naked giant chickens. Yet again, we are taken back to Carolyn’s fight, where she ends up killing the last of the creations.

Cataclysmic chaos and violence seem to be the only thing the comic excels at. The visuals are badly drawn and do not allow the reader the chance to follow what is happening clearly. The comic setting and scenes change too much to allow any real development of the story. The only thing that seems to make the story interesting to read is the cheesy dialogue between the characters, but this is also done in excess hence taking away its intended purpose (Specifically referencing Eggbert and Floppibottoms use of curse words).