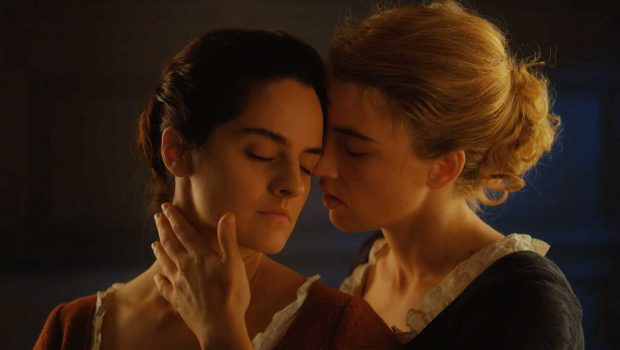 Portrait of a Lady on Fire – Film Review

With Portrait of a Lady on Fire, French director Céline Sciamma has proven that silences are underused in modern cinema. The power of this challenging and supremely made film is attributable to its unnerving silences. The decision not to employ a non-diegetic soundtrack for its duration is effective. It underscores the film’s palpable sense of isolation and allows us to concentrate on the powerhouse performances of two women falling in love over five days. Portrait is also buoyed by well-chosen and meaningful shot selection that enhances the depth of the story’s thematic goals. It is an incredibly complex and sometimes challenging film but satisfying in its artistry and emotional resonance.

Portrait is not unlike Sciamma’s excellent coming of age drama Girlhood (2014). It is a worthy follow-up by further dramatising troubled female relationships. The story, set in France in the late 18th century, is about a painter, Marianne (Noémie Merlant), who arrives on an island by boat. She has been hired by a countess (Valeria Golino) to paint her daughter, Héloïse (Adèle Haenel). However, she must act in secret by posturing as a companion on her walks. A painting will seal Héloïse’s marriage to a man, but she refuses to be painted because she rejects the proposal. She recently left a Benedictine convent because her sister killed herself; consequently, her mother wants her observed. Marianne studies her subject on their walks and then secretly paints her. When the first painting fails, the countess says she will return in five days. Meanwhile, Marianne and Héloïse help a servant, Sophie (Luàna Bajrami), with an unwanted pregnancy and become attracted to one another. Their relationship complements the authenticity of the next painting.

Portrait brims with unique ideas, including the concept of the lover versus the poet. One evening, Héloïse reads the story of Orpheus. The text describes how a man is told not to look back at his lover because she will die. He chooses to look because he is believed to be a poet, meaning someone who will create ideas about a person they are losing to underline the possibilities of what might have been. This infers a moral dilemma in Portrait about remembering someone as they were (a lover) or creating imaginings of what we wish could happen (a poet). As a painter, Marianne assumes the role of the poet because she snares glimpses of her subject and then projects her impressions of Héloïse clumsily onto the canvas. When Héloïse first sees the painting, she says, ‘is that me? Is this how you see me?’ She is unimpressed because initially it fails to capture her essence. A personal influence is likely because in real life, Sciamma and Adèle Haenel were in a relationship together for several years.

Time is a pivotal theme in the story and the central relationship. The women draw closer over a period of only five days. However, their understanding of one another, specifically their indifference to men, deepens the passion of their affair. They talk to one another as though they have been equal their whole lives. In one scene, they recall what they remember about each other. The conversation is filmed using a high angle shot and is photographed in one take. The extended shot duration underlines the longstanding nature of their memories and their unbroken love for one another. In another scene, Marianne asks, ‘did you dream of me?’. Héloïse replies, ‘no I thought of you’. The line poignantly reflects her refusal to linger over falsehoods like a poet would in their imaginings. Instead, she conjures greater empathy for Marianne than even the most vivid dream could realise. These are examples of how their love grows over a short but unforgettable number of days. 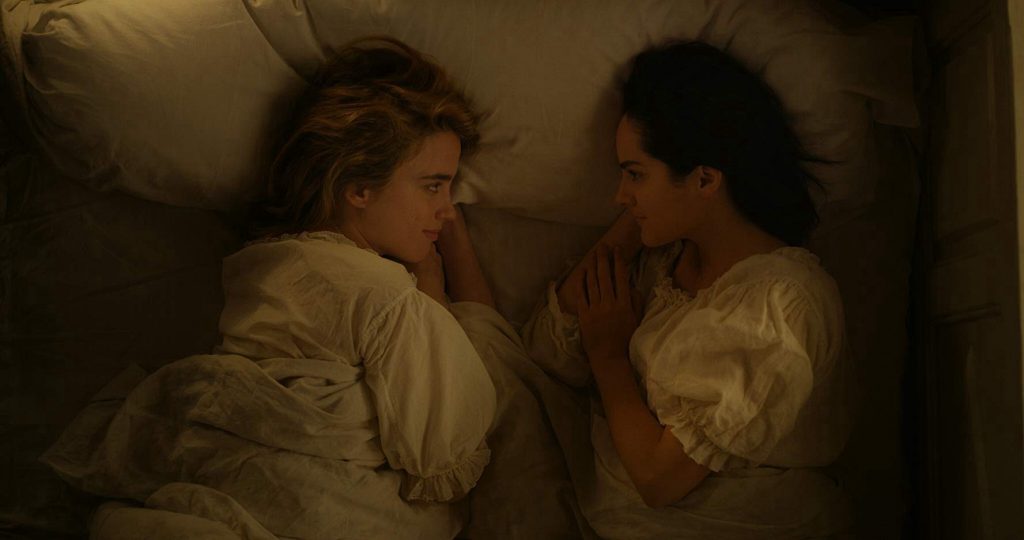 Sciamma demonstrates her artistry by enriching the story’s meaning with smart formal choices. The most unique stylistic decision is the muted soundscape. Sciamma has resisted employing a traditional non-diegetic music score. Before the final scene, the loudest sound effects are waves wrestling by the cliff-side. The noise underlines the outside world’s dangers and the silences are the unspoken truths of the characters’ feelings. People can speak volumes to one another with as little as a glance. As a result of its silences, Portrait is as quiet as any recent film but also highly unnerving. The silences are paired with scenes shrouded in deep shadows, including Marianne walking down a spiral staircase holding a candle. The silences and darkness reveal the characters’ internal conflict and moral dilemma: is a person truly free if they are alone? Early on, Héloïse longs to be alone and verges on suicidal as she sprints towards the cliff edge. However, she is torn because later she chooses to be painted. The dilemma regarding isolation is envisioned by the blocking choices. A stunning formal decision is having the camera pursue Héloïse from behind using an unbroken tracking shot. The shot selection reflects Marianne’s lack of understanding of this mysterious woman in a black cloak, but also her determination to discover who she is.

The story’s transition from anonymity to empathy is apparent in a personal encounter on the beach. The two women are filmed standing shoulder to shoulder in a rare tight close-up shot. However, they refuse to directly look at each other. Sciamma’s camera deliberately captures the moment they steal quick glimpses of one another while the other looks away. They silently probe each other’s expectations without revealing personal insights through dialogue and exposition. A contrasting scene emphasises their long gazes. The women have drawn closer and are framed in a two-shot as Marianne attempts play a rusted organ. The shot duration and the look on Héloïse’s face are pivotal. She is in awe when hearing the music and her excitable look of appreciation is humorous. Without words, it is deeply expressive of her growing passion for Marianne. The unbroken take reflects her willingness to study Marianne as a metaphor for her newfound love and admiration. 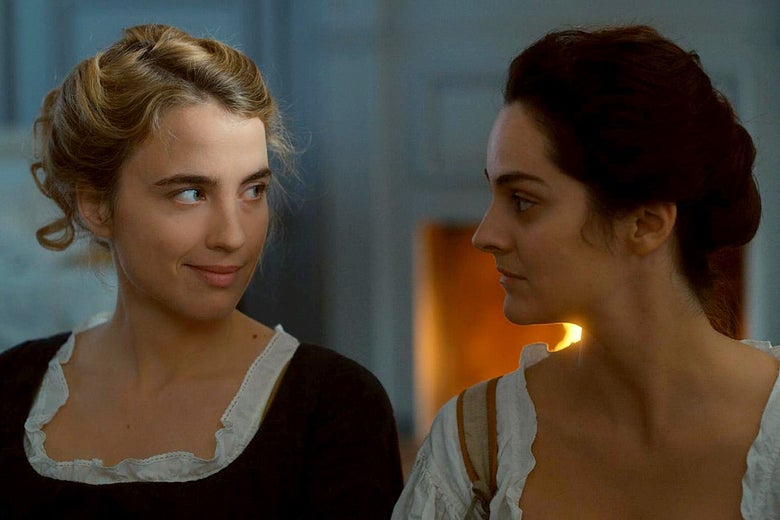 The two leads are incredibly strong because of their expressiveness in silences. Both women embody their characters and effectively underline the subtle changes in their feelings for one another. Noémie Merlant as Marianne shows the distress that she feels about being attracted to a woman destined to be married. It is an incredibly concentrated and intense performance because she is studying someone who does not wish to be painted, or more specifically, understood. Similarly, Adèle Haenel’s demeanour visibly changes throughout the story as Héloïse warms to Marianne. The moment her animosity and armour peels away is apparent with barely a word spoken. There is also an impressionable performance by Valeria Golino as Héloïse’s mother who subtly underlines her as an oppressive figure. Meanwhile, Luàna Bajrami as Sophie, who longs for an abortion, is disarming and sympathetic. These characters make the film involving, particularly in a deeply unsettling moment where Marianne sees Héloïse as a ghost-like figure of her imagination and throughout the intensely moving conclusion.

Portrait is highly challenging because of the meaning lingering beneath the scarce lines of dialogue. I saw the film twice to fully understand what the characters were communicating. What is vivid is the powerful audio-vision that draws us into the characters’ mindsets. The film takes a relatively simple premise and enriches it through unique formal choices and the actors’ expressiveness. These elements illustrate how the two women draw together over a brief period and what their feelings are on borrowed time. The painting that Marianne creates is like the film. The more details we accumulate, the deeper we are immersed into the thoughts and emotions of the women. It makes us understand why a character chooses to remain a lover of the glorious past and not a poet who imagines an impossible future.

Summary: The painting that Marianne creates is like the film. The more details we accumulate, the deeper we are immersed into the thoughts and emotions of the women.