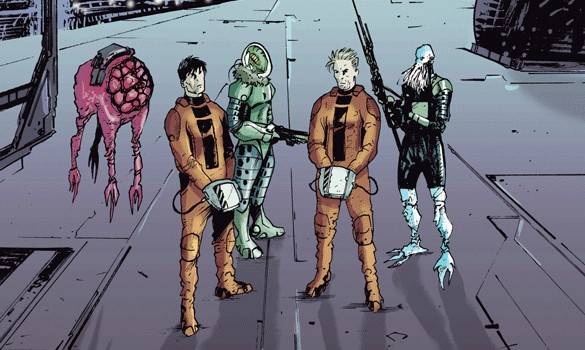 This issue is the end of the current arc of Port of Earth, yet is still remarkably easy for a new reader to get into.  The issue begins with a quick history of the Port, and quickly moves into one of the sit-down news segments that Kaplan uses to move the narrative forward.  This allows even a casual reader a great opportunity to get right into enjoying the story without having to worry too much about previous issues. 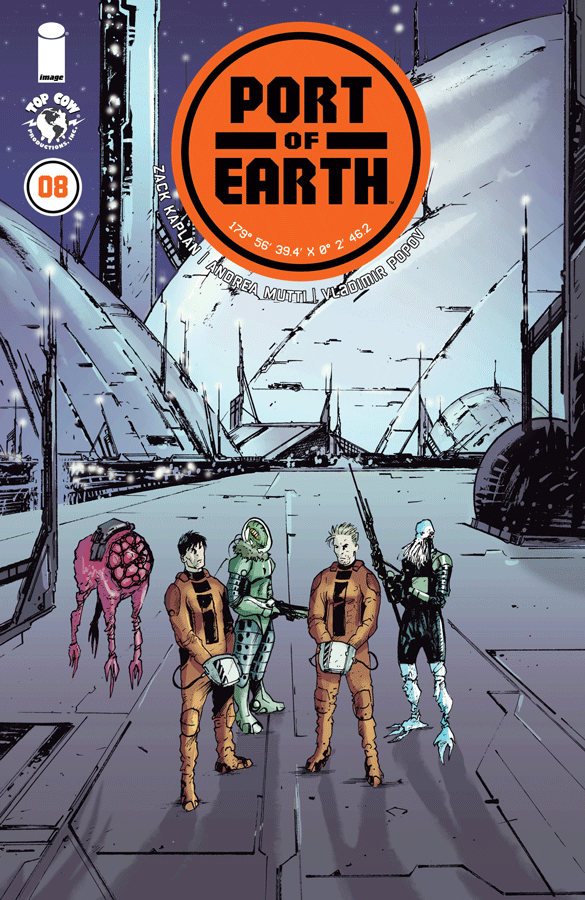 The cover of this issue features Agents Rice and McIntyre, the two E.S.A agents that the series has been following as they go through a day in which everything that can go wrong does.  They stand in restraints, surrounded by armed alien guards.  This issue is also the first in the series where it isn’t clear that the Port is on Earth.  Here it appears very much as an alien structure and environment.

The art in this series continues to impress.  Andrea Mutti’s work fits seamlessly with Zack Kaplan’s story, and brings the world of Port of Earth to life.  We can see the emotions clearly on the faces of the characters as well as in their body language.  The head of the E.S.A. is clearly uncomfortable and annoyed throughout the interview scenes, becoming openly hostile towards the end.  We can see agent Rice finally snap after all he’s been through in this series, but this is done in by having him emotionally shut down, and Mutti doesn’t show what is going through his mind until it happens.

The aliens are also well done.  At times they seem to not be fully rendered, which actually adds to them, as Mutti gives just enough detail to get the reader’s imagination going.  Other times they are very completely drawn, and look very alien, some not having any humanoid characteristics at all.  It was enjoyable seeing the numerous varieties of alien species. 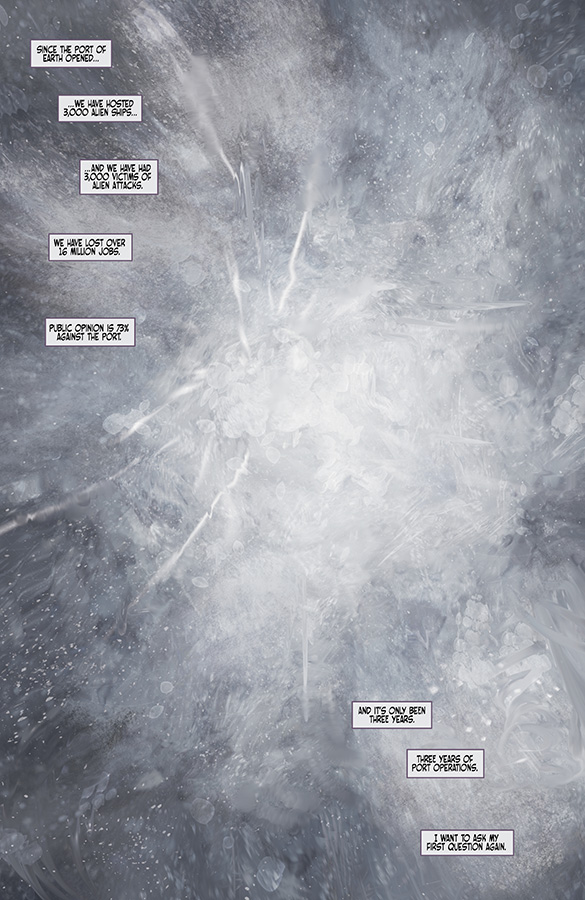 As mentioned above, the issue begins with an interview with the head of the E.S.A.  He appears at times uncomfortable, angry, crestfallen, and downright hostile as the issue goes on.  The issue then uses the news footage obtained by the network as they had been using a drone to follow McIntyre and Rice throughout the series, and the footage is now being presented to the world.  This device is used to transition smoothly from the interview to the E.S.A. agents in the field.  They have managed to corner supposed alien terrorists.  After some posturing, the agent’s translators kick in, and we learn more about the Consortium that Earth has made an agreement with to host the Port.  None of it is good.  Kaplan draws parallels to colonization efforts throughout our own history, none of which bodes well for the Earth. 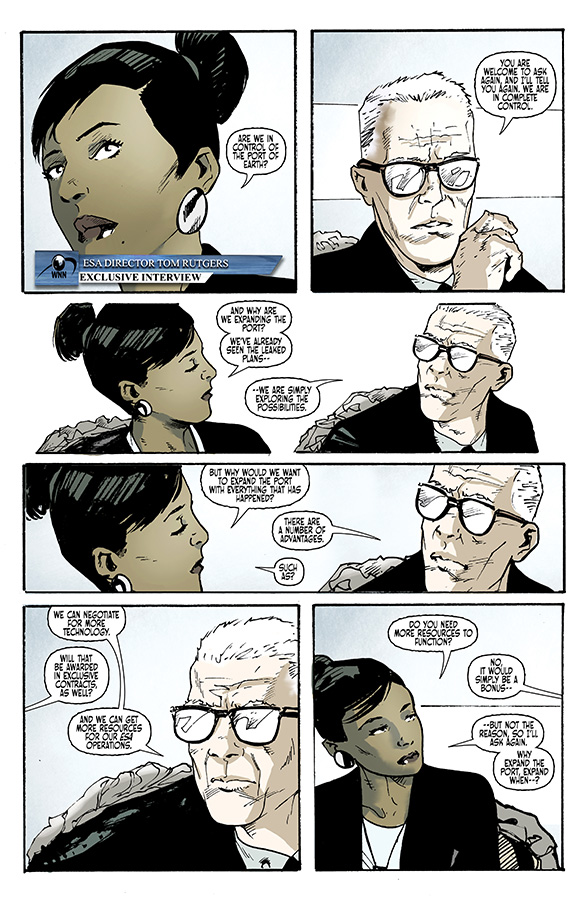 This series, and this issue are incredibly well written and drawn.  The story and art blend together in a seamless manner, and each enhances the other.  While we can feel the E.S.A. agents are clearly over their heads in this issue, what is most telling and truly drives this issue, is the interview with the head of the organization.  The series has clearly been well paced.  This issue to end the current arc brings things together from the very beginning, without being inaccessible to new readers.  Zack Kaplan has written a sci-fi epic, complete with the moral quandaries that often accompany series like this.  He also manages to include nods to our own history.  In particular with references to what happened to those peoples who were colonized by European empires. 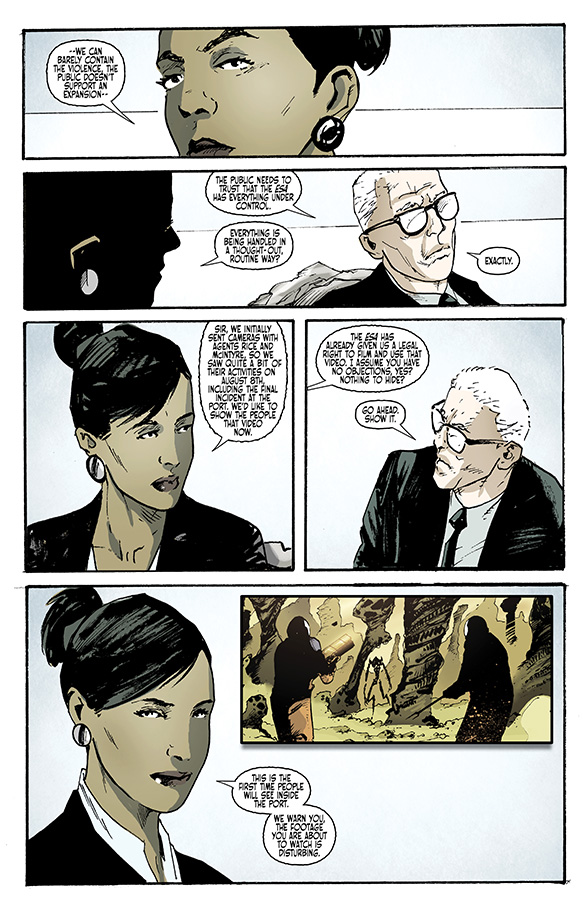 This issue is fantastic. Beautiful art and a deeply engrossing story.  If you’re looking for a story to really sink your teeth into, check out Port of Earth! 5 out of 5 stars.