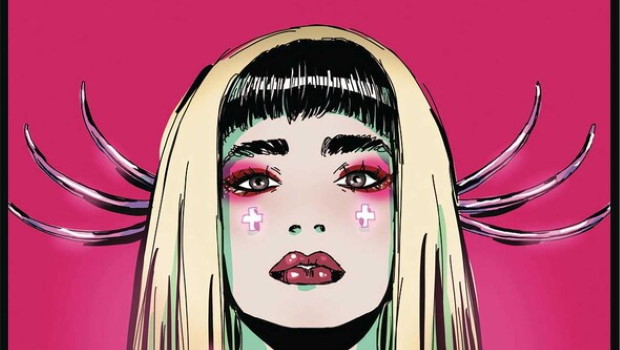 Summary: What's more engaging than learning about someone? How about learning about them while they learn about themselves? Poppy Inferno will take you on that journey as Poppy herself tries to determine just who she is.

If video killed the radio star, YouTube made the popstar! Poppy (as I’ve now learnt), has entered the world of music and entertainment via the very accessible (yet hard to master) gateway of Youtube and other social media. Whilst you may have learnt a bit about Poppy from those sources… Poppy Inferno lets you learn more about her as she learns about herself.

I was drawn in from the beginning, the mystery that slowly unfurls does so at just the right pace. Like waking from a dream (or in a dream) and trying to get your bearings, Poppy lets us follow along as she too slowly learns where she is and what is going on. It’s exposition done right, it doesn’t feel forced and yet it fills in all the details we need. The mix between figurative and literal hell is nice too… but which is truly which?

Like Alice In Wonderland, if you replaced Alice with Siouxsie Sioux and perhaps mixed a bit of Terry Gilliam with Tim Burton for the landscape and surrounds… so right up my alley in other words. I am again reminded of those days of late night television watching Aeon Flux, that stretched out physical form that seems to flow like water as it moves it’s lovely to watch/view. The colours and patterns of Poppy and her outfit are wonderful contrasts to the drab scenery in the hellscape below, while her first big outting as the labels new “product” looks just like a slightly more punk version of the aforementioned Alice.

There’s an entertaining story here on the surface and below the surface for those willing to see how deep this rabbit hole goes, there is plenty of commentary on the music industry, marketing and false imagery and what is sometimes at stake to “make it”. A beautiful book with a compelling character… Poppy will certainly be on my radar now. Grab it if you like indie music or things off center, unique and (in my opinion) more interesting.