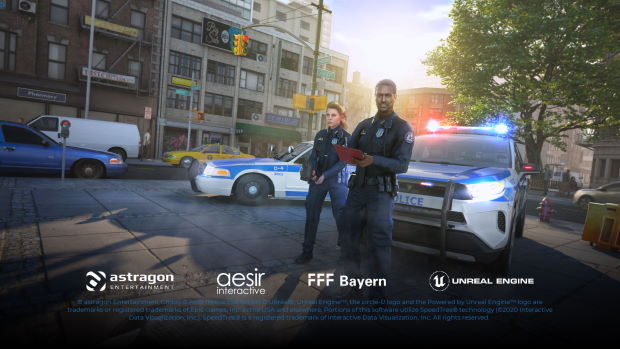 Summary: Take to the street as a police officer to keep the city safe... with not a Steve Guttenberg in sight.

For many years now (yes if I think about it we are talking decades)… Grand Theft Auto has been the game that stands out as an open world environment focused on criminality. To be honest, the last time I played it, it felt a bit… worn out (not so much the game… just my desire to behave in such a callous manner), so it’s nice to now have the flip side of that in Police Simulator: Patrol Officers.

You are assigned Brighton as your precinct and will work your up from parking violations to more serious crimes all while getting to know your community and helping the citizens where possible. The fact that you start with simple tasks like writing parking tickets might sound mundane but it’s actually pretty important to help you get used to the game. With one or two crimes to keep an eye out for, you can focus pretty well on infringements… but as you work your way up, you will start having the ability to take on patrol shifts in cars, engage in narcotics arrests and so on. You can play in two modes either simulation or casual… casual will alert you to crimes being committed… seemingly all crimes being committed (I’ll come back to this). 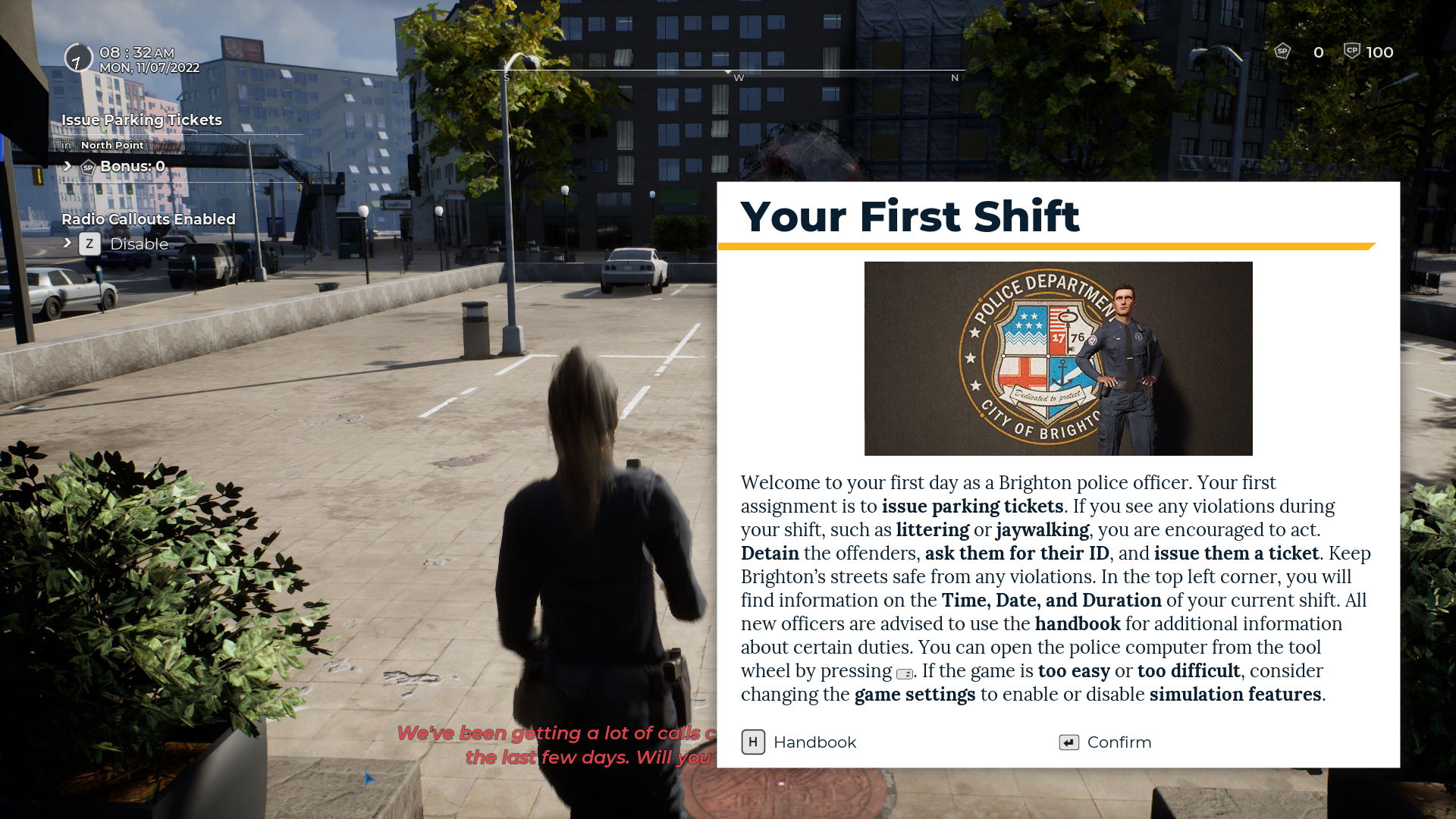 Visually the game is quite pretty but it was a bit disconcerting to walk out of the starting area and be greeted by the officer at the desk only to see they looked the same as me. There is actually variation in the characters in the game… but you will start seeing familiar faces as the range isn’t too large. It’s not a problem but it might have been a good idea to have the person at the desk be a distinctly different model to any that you can choose to play as. 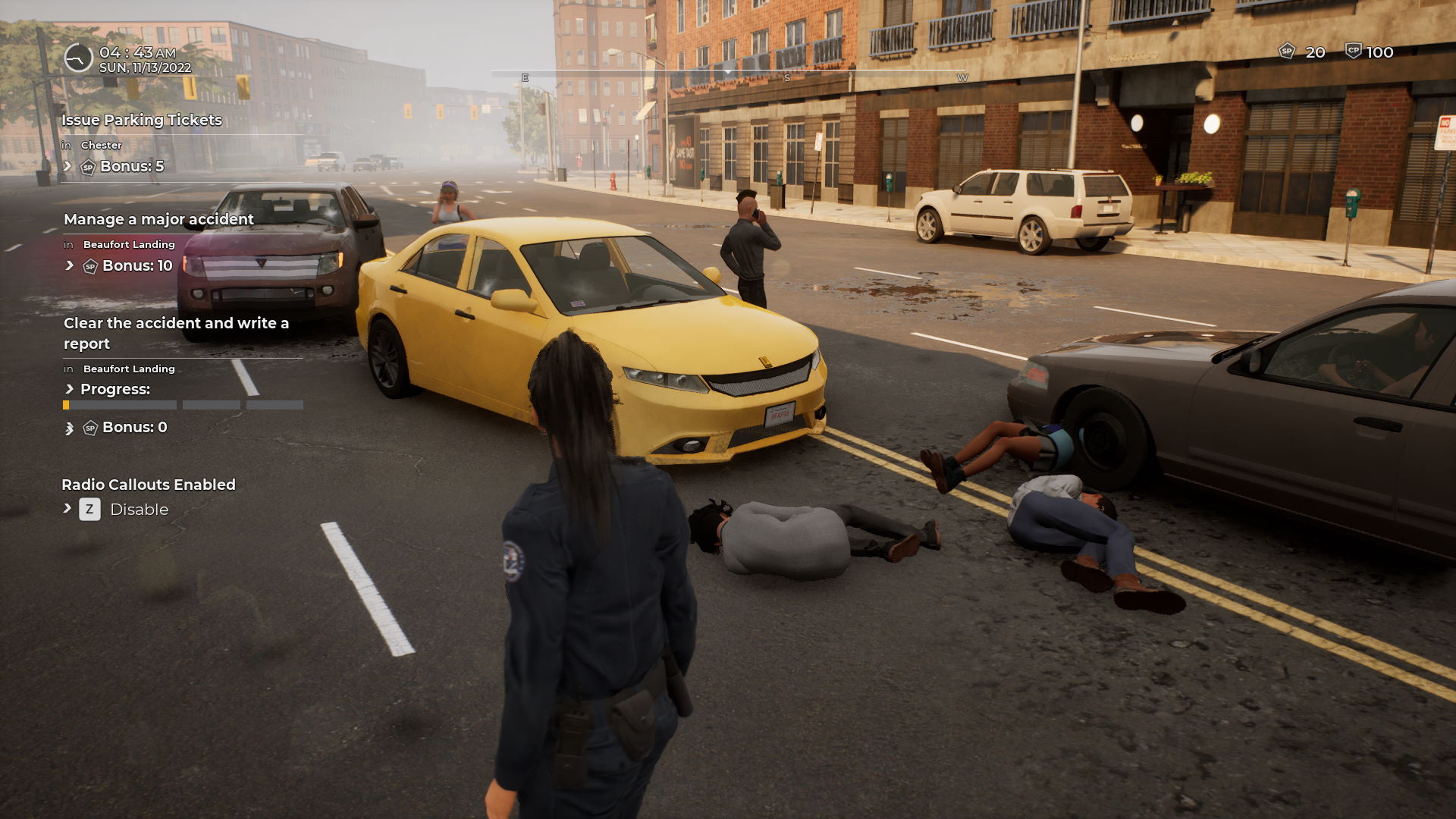 Sound is quite good too, though the volume levels can be a bit “interesting” at times. You can of course set the volume levels but it’s more situational I think that the issues arise. Before I’d even walked out of the station I heard what sounded like an extremely noisy car (I later found that it would indeed have been that and I could have given them an infringement notice for it)… it obviously draws your attention but I’m not sure it should have been quite so audible within the walls of the station. Dialog can also be a bit interesting as the voice of people (specifically ambulance or fellow police officers) tending to people at a car crash will compete for attention over your direct interactions with witnesses. It’s not a huge issue and can be kind of funny at times… but it is a quirk that perhaps might get adjusted later? 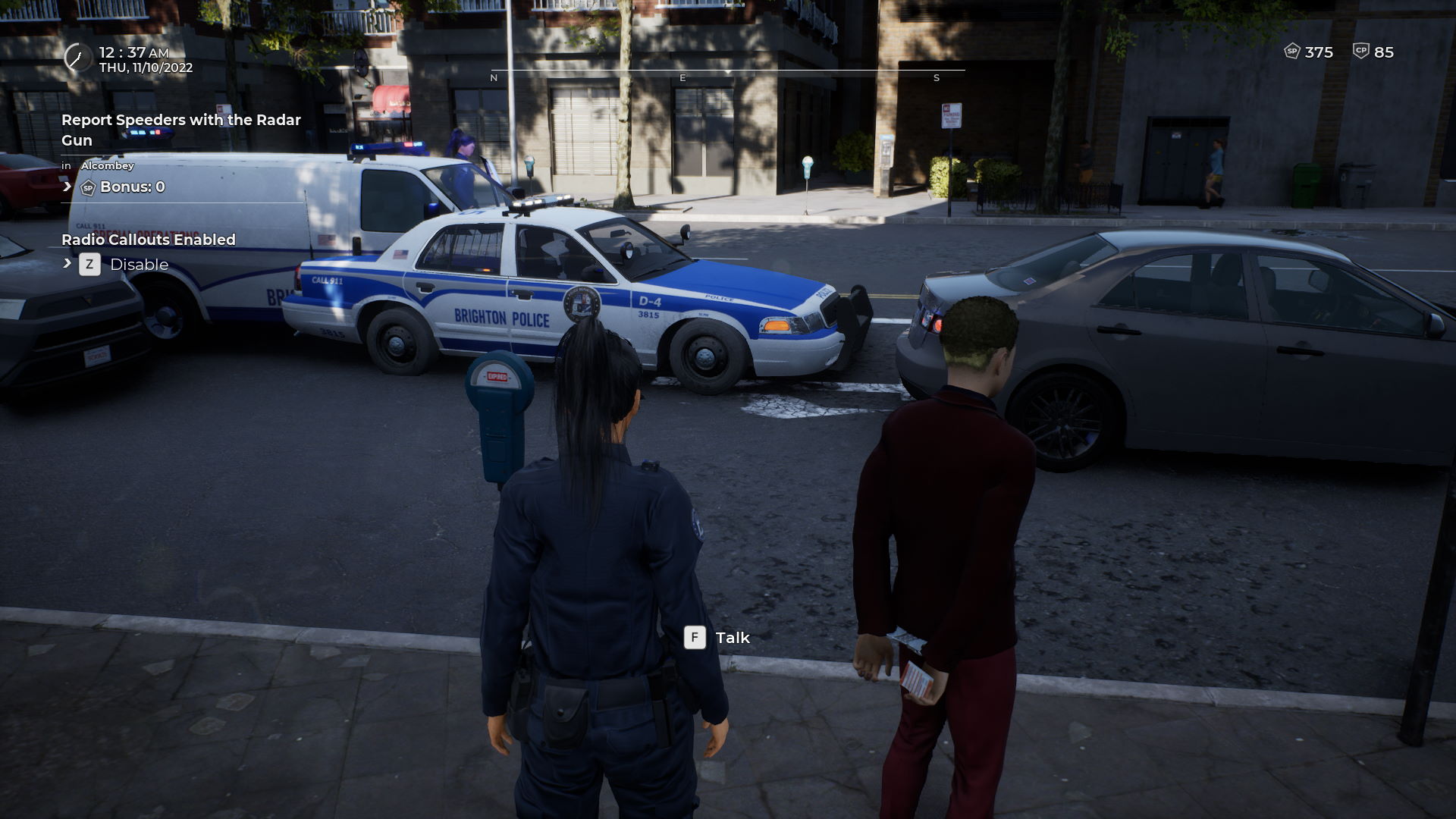 Speaking of quirks, collision detection is a bit interesting. I had a traffic accident I’d finished dealing with, I’d called a tow truck (wrecker) and a police patrol to collect my arrestee, I went to get in my car (which one of the other vehicles had managed to drive part way into… with no consequence). I got in on the wrong side… no problem, pressed tab to shift seats and suddenly the car launched into the air, spinning, before landing in a smoking dented state and informing me I’d been in a collision. Again, not a huge issue and arguably more funny than anything… though that does result in supposedly having to write a report/acknowledge your “causing” an accident. 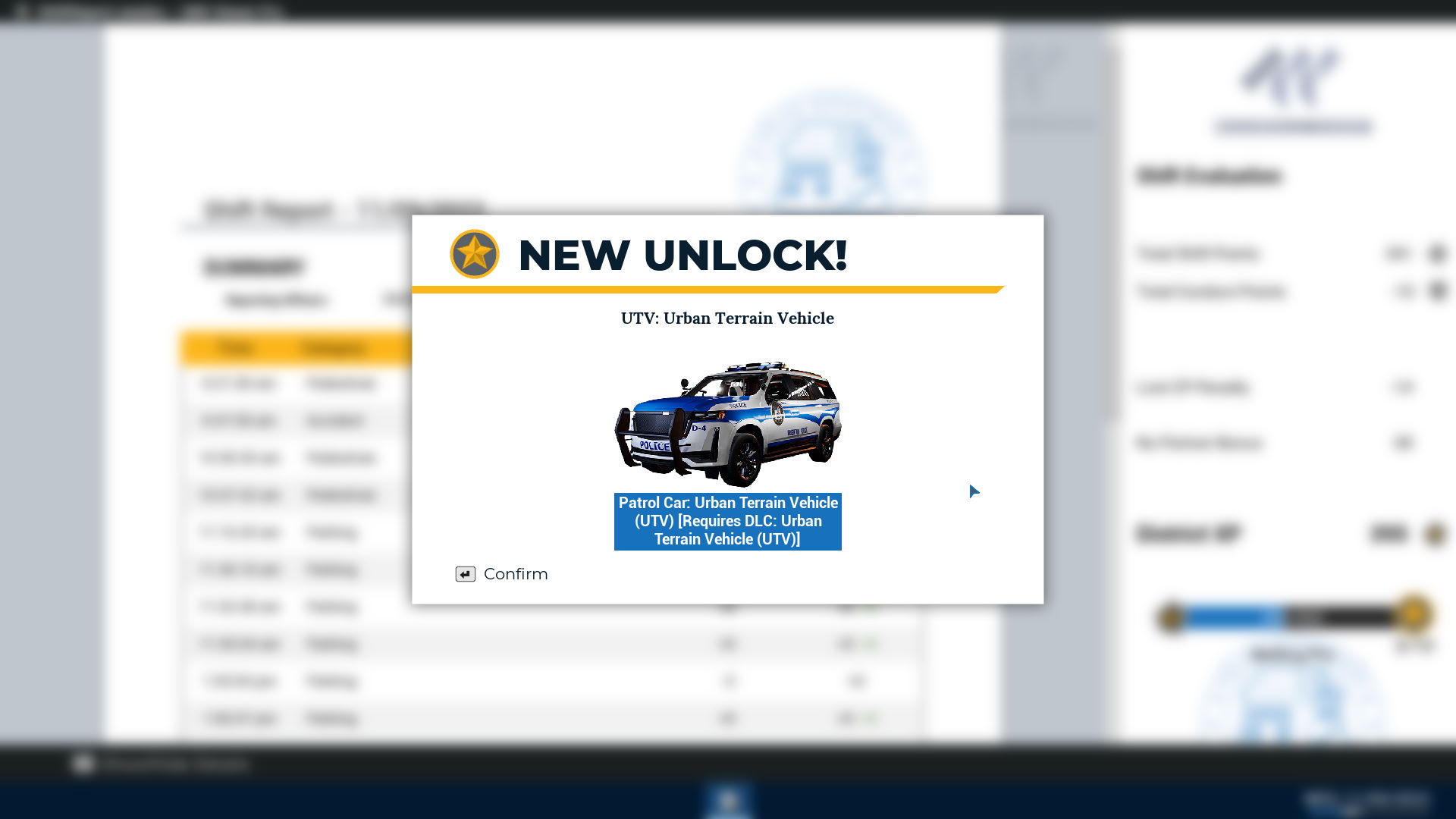 That point about the casual mode alerting you to crimes… yeah, it will do so regardless of whether it’s something you could reasonably have seen. If you are walking and someone directly behind you litters… there’s a good chance the game will say “that person littered”… it also puts a big indicator above them so you know who it is… but I felt wrong accusing/fining someone for something I didn’t directly witness. If you switch to simulation mode this doesn’t happen… but you will be pinged for any time you don’t follow the law exactly (such as racing across the road to stop a criminal… because that would be J Walking). You can however be a bit more selective in what “freedoms” you have by selecting what elements to be more simulation like or casual like in the menu so it is adjustable… I err on the side of casual because I want the freedom to be able to pursue people committing crimes without being marked down for breaking laws in the process (clearly I’d make a terrible police officer in real life ;) ) 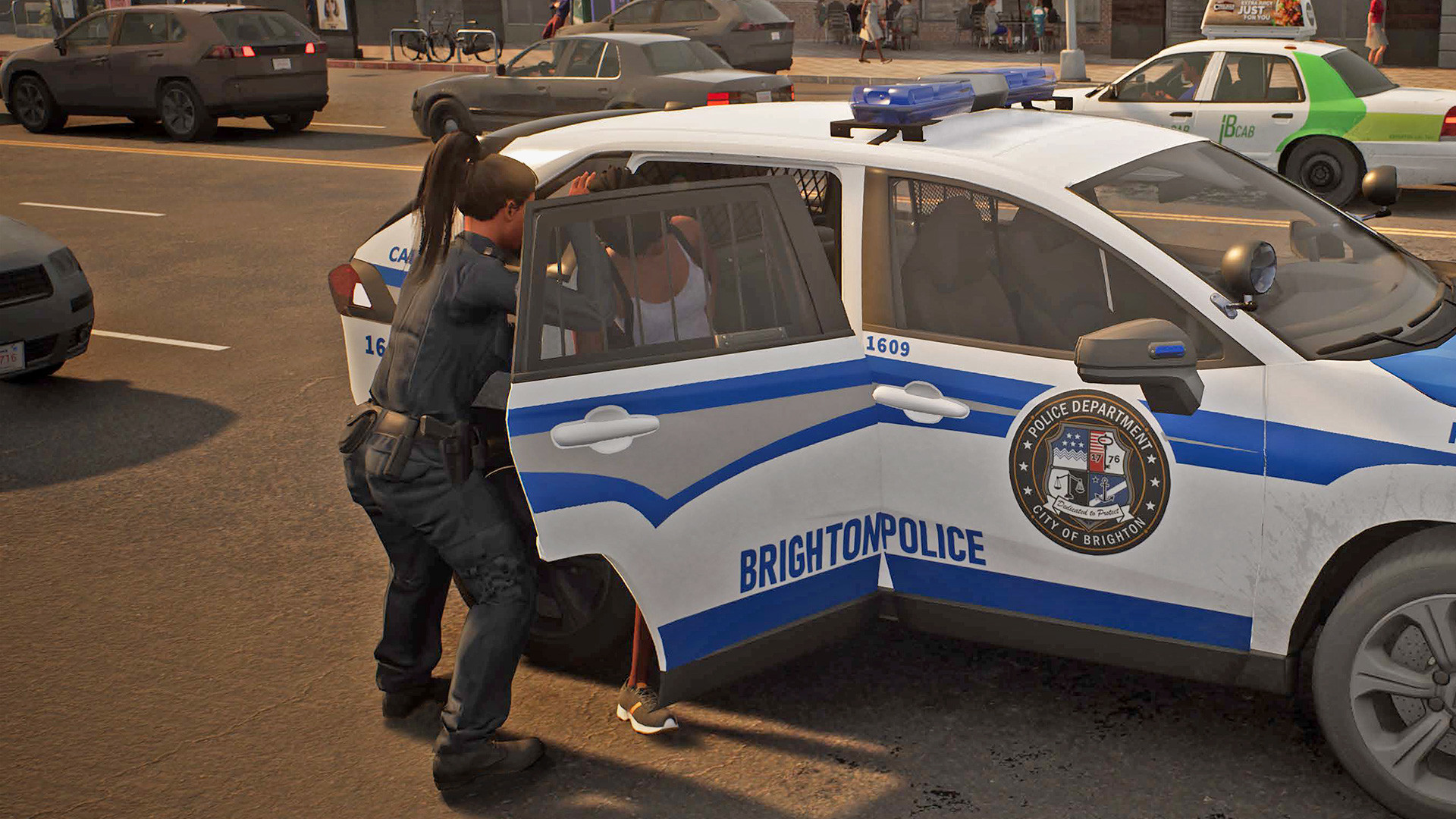 Over all, quirks and all, I really like Police Simulator: Patrol Officers… it does play like the lawful side of Grand Theft Auto and that’s a refreshing change! Grab it so you can shout “I am the law!”