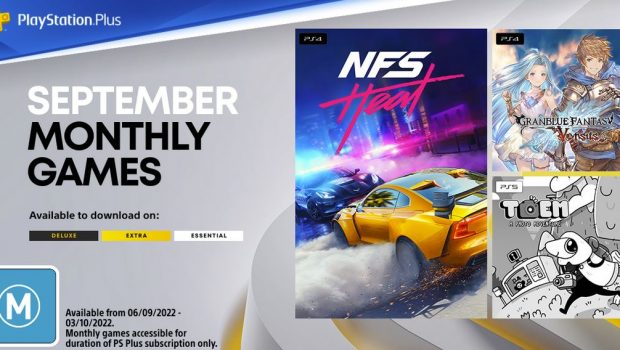 The Monthly Games are available from September 6, and Game Catalogue and Classics arriving on September 20. So, let’s have a look at what’s in store!

Hustle by day and risk it all at night in Need for Speed Heat, a white-knuckle street racer, where the lines of the law fade as the sun starts to set. By day, Palm City hosts the Speedhunter Showdown, a sanctioned competition where you earn Bank to customise and upgrade your high-performance cars. At night, ramp up the intensity in illicit street races that build your reputation, getting you access to bigger races and better parts.

Legendary fighting game studio Arc System Works brings the Granblue Fantasy universe to PlayStation in an action-packed, head-to-head fighter. Granblue Fantasy: Versus features a colourful cast, each with a unique fighting style. Also includes an RPG mode that features an all-new, original story. Play solo or team up with a friend to fight waves of enemies in thrilling action-RPG combat.

Set off on a delightful expedition and use your photographic eye to uncover mysteries in this hand-drawn adventure game. Chat with quirky characters, solve their problems by snapping neat photos, and make your way through a relaxing landscape. 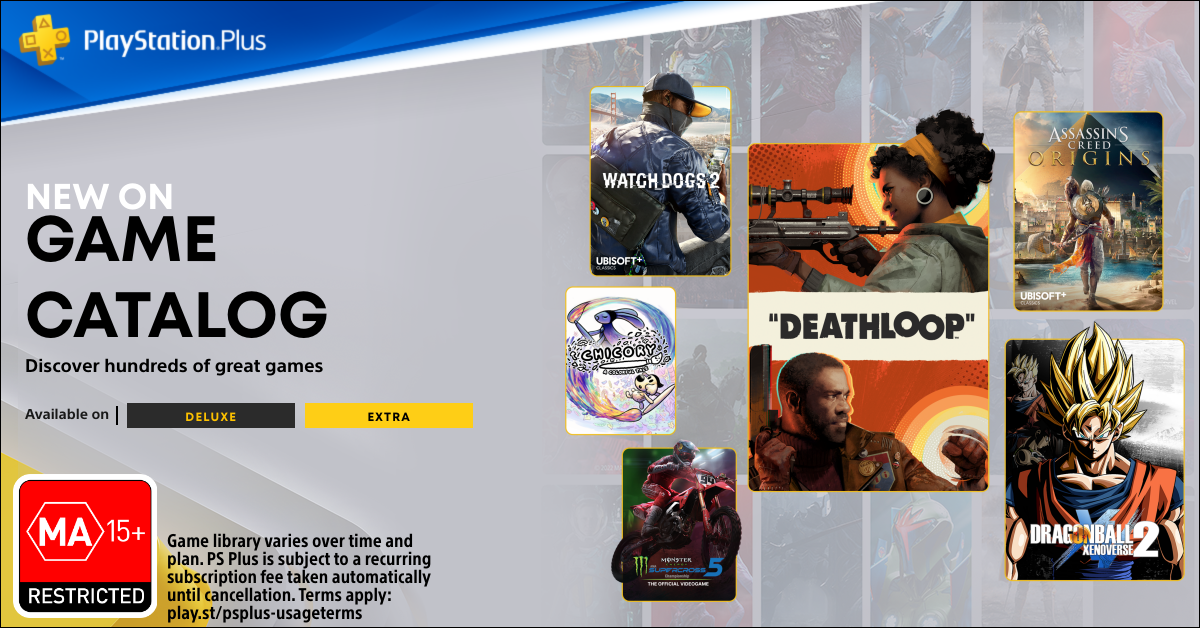 Dishonored developer Arkane Lyon returns with a first person shooter tale of two rival assassins trapped in a mysterious time loop on the island of Blackreef, doomed to repeat the same day for eternity. As Colt, the only chance for escape is to end the cycle by assassinating eight key targets before the day resets. Learn from each cycle – try new paths, gather intel, and find new weapons and abilities. Alternatively, play as Julianna to protect the loop by invading other players’ games and stopping Colt in his tracks.

Explore the gigantic and unpredictable lands of ancient Egypt in this open world action RPG. Unveil dark secrets and forgotten myths as you go back to the one founding moment: The origins of the Assassin’s Brotherhood. Engage into multiple quests and gripping stories as you cross paths with strong and memorable characters. Loot and use dozens of weapons with different characteristics and rarities. Explore deep progression mechanics and challenge your skills against unique and powerful bosses.

Play as Marcus Holloway, a brilliant young hacker living in the birthplace of the tech revolution, the San Francisco Bay Area. Explore this dynamic open-world as you attempt to take down an invasive operating system, hacking into every connected device and develop different playstyles as you upgrade your hacker tools. Take those skills online with a brand new co-op and adversarial multiplayer Watch Dogs experience.

Relive – and battle in – historic moments in the Dragon Ball saga in this mashup between brawler and action RPG. Build your own character with an in-depth creation system, explore the city hub then time travel back to iconic moments from the series and use your might to battle against – and alongside – some recognisable faces.

This management game about dying has you playing as Stella, ferrymaster to the deceased. Build a boat to explore the world, then befriend and care for spirits before finally releasing them into the afterlife. Farm, mine, fish, harvest, cook, and craft your way across mystical seas. Join the adventure as Daffodil the cat, in two-player cooperative play. Spend relaxing quality time with your spirit passengers, create lasting memories, and, ultimately, learn how to say goodbye to your cherished friends.

This top-down adventure game is set in a colouring book world where you can draw on anything. Use your painting powers to explore new places, solve puzzles, unlock new abilities to reach new locations. Take on dozens of side quests, including mail delivery, art classes and photo taking. You can even play with friends and paint together in local co-op!

Race to become champion, race against friends and even build the perfect track in this indoor supercross sim. Take on career mode, moving from 250SX up to challenging the heroes of the 450X class, all the while keeping your rider racing fit, to achieve ultimate success. Tinker with the Track Editor mode or take on friends online or in split-screen in multiplayer.

Complete with new HD graphics, gameplay improvements and animations, rediscover all the levels from the original Miracle World, as well as brand new levels which expand the lore and story behind Alex Kidd. Transport straight into the classic with Retro Mode at any point during the game, and switch between reimagined music or remastered originals.

Play Through 20 Rabbids Invasion episodes, interacting with the cuddly critters while the show runs, competing with friends and family to chase high scores and unlock new content.

Rayman and friends return in this fantastic 2D platformer, packed with all-new levels packed with inventive challenges that’ll test your reflexes (and your friends’ with 4 player co-op online and local), as well as unlockable mini-games and even stages from the original Rayman Origins.

Scott Pilgrim vs. The World: The Game – Complete Edition | PS4

Rediscover the beloved 2D arcade-style beat ’em up inspired by the iconic comic book series and movie, Scott Pilgrim vs. The World. Play as your favourite characters, level up and learn new awesome abilities, unlock secret items and modes, summon powerful allies, and more! Team up with friends and combine your skills to battle your way through waves of tough enemies, or compete with them in awesome mini-games like Dodgeball, all on your way to defeat the League of Ramona’s Evil Exes!

Agency operatives Gabe Logan and Lian Xing discover that a plot to sell off the deadly Syphon Filter virus stems from within their own organisation. As they attempt to expose the conspirators and prevent the sale, the Agency responds by alerting military and police forces that Logan and Xing must be eliminated. Originally released in 2000, Syphon Filter 2 is enhanced with up-rendering, rewind, quick save, and custom video filters.

Help Buzz, Woody and the rest of the toys ensure no toy gets left behind and enjoy mini-games in this adventure originally released on the PSP, now enhanced with up-rendering, rewind, quick save, and custom video filters.

Embark on an epic action RPG as an outcast swordsman, one of the last of his clan, must unlock secrets once thought lost and restore harmony to the land. Originally released on PSP, the game is now enhanced with up-rendering, rewind, quick save, and custom video filters.