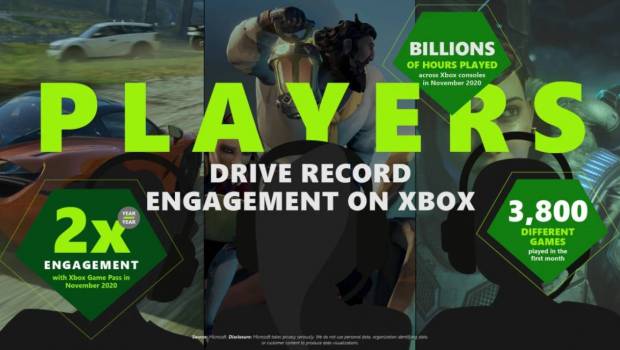 Since kicking off a new generation of gaming with the launch of Xbox Series X|S last month we’ve seen players record billions of hours and play over 3,800 different games in November. Xbox Game Pass monthly engagement more than doubled too, as more and more players connect with their friends and discover games they love.

So, what’s next? Looking to 2021, Xbox have announced cloud gaming (beta) with Xbox Game Pass Ultimate is coming to iOS and PC in 2021 – HUGE! Whatever screen you choose, Xbox want to make it easy to continue your game and connect with your friends.

Thanks to you, we’ve kicked off a new generation of gaming and can now share more about what comes next in 2021. If the last year has taught us anything about the future, it’s that the joy of play and its power to connect us to family, friends and newly joining members of Xbox is something to be cherished and shared.

Your overwhelming response to the launch of Xbox Series X|S has been staggering and heartening at the same time. We can’t wait for everyone who wants to experience gaming on Xbox Series X and Series S to do so and are working with our retail partners to replenish stock as quickly as we can.

As we look at how we define success at the start of a new generation for gaming, we can think of none better than more and more players connecting with their friends and discovering games they love. It’s the billions of hours and over 3,800 different games you played in the last month that is the foundation for our success at Xbox.

You’re also getting the most out of the Xbox Game Pass library – compared to the prior year, in November, Xbox Game Pass monthly engagement more than doubled. We also saw:

Expanding Xbox to new players is central to our ambition of helping games and developers find an easy path to the world’s 3 billion gamers. We are doing this by embracing multiple devices and providing a consistent Xbox experience wherever you log in, whether that’s on your Xbox Series X|S, PC, Xbox One, Android device or – starting in Spring 2021 – your Windows PC and iOS device from the cloud.

In Spring 2021, we will take the next step in our journey to reach more players around the world by making cloud gaming as part of Xbox Game Pass Ultimate available on Windows PCs through the Xbox app and browser, and iOS devices through mobile web browser. By adding over a billion devices as a path to playing in the Xbox ecosystem, we envision a seamless experience for all types of players; whether it’s playing Minecraft Dungeons with your Xbox friends using touch controls on an iPhone or jumping into a Destiny 2: Beyond Light strike on a Surface Pro when you have a break between meetings.

Whatever screen you choose, we want to make it easy to continue your game and connect with your friends.

We can’t wait to share more early next year about our cloud gaming ambitions and how you can expect to take your gaming experiences further.

No matter the year, it’s always about the games. In 2021, creators around the world will tap deeper into the power of Xbox Series X|S and bring a massive variety of content to Xbox players.

From Xbox Game Studios, 2021 will see the Master Chief’s return in Halo Infinite, a new brain-bending odyssey in Psychonauts 2, and some surprises we haven’t announced yet. Your favourite games will also continue to grow with you, with 30 pieces of new content coming to several of our franchises next half, including Forza, Sea of Thieves, Grounded and much more. Looking further ahead, you will also hear more from teams across Xbox Game Studios and Bethesda.

Next year we also plan to officially welcome the Bethesda team, creator of critically acclaimed and best-selling gaming franchises like The Elder Scrolls, Fallout and Doom, to the Xbox family. With their help, Xbox will grow from 15 to 23 creative studio teams in 2021, all forging a future of games fit for a world of different players.

We anticipate this to be the most exciting generation yet for developers and players alike, with something for every kind of gamer. While we have so much more in store, both from our talented partners and our creative teams at Microsoft, here’s a small taste of new games that have been announced as coming to Xbox in 2021, including those that will also be playable with Xbox Game Pass:

As we close out this year, I’d like to thank you again on behalf of Team Xbox – not just for giving Xbox Series X|S a strong start, but for supporting our belief that this generation of gaming does and should belong to you. Stay tuned, starting with The Game Awards tomorrow, for more surprises.