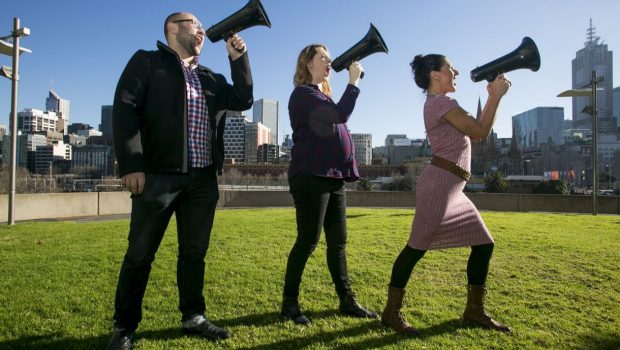 STRICTLY EMBARGOED UNTIL 8PM TUESDAY 9 AUGUST 2016 — This Melbourne Fringe, Arts Centre Melbourne and Vessel will present Play for Australia, a season of curated, ultra-short 600 word plays written by established and emerging playwrights. Led by Vessel creative director Jim Lawson, 6 actors, 2 directors, 12 writers and a dramaturg will present a series of plays exploring national identity from 29 September – 2 October in the Playhouse Rehearsal Room. The unique gathering of many theatrical voices subverts the norm of one voice on the stage by delivering immediate engagement with the daring ideas of 12 individual writers from diverse backgrounds. The commissioned works explore who we are and who we could be as a nation. They are a timely and powerful response to how these themes are reflected on our stage and in the street. On the week of the performance the actors, directors, writers and dramaturg will rehearse the plays at Arts Centre Melbourne and present the works as part of a pilot project.

Play for Australia is an original concept by Jim Lawson based on the very successful Tiny Plays for Ireland by Fishamble Theatre, Dublin. To further engage audiences, each performance will be followed by a post-show discussion with the writers, as a provocative invitation to the audience to question the future of our national identity.

“Theatre is a wondrous and powerful vehicle to explore and say something vital about the world we live in. The format is challenging and the idea is wonderfully daunting.” Patricia Cornelius

“As a fierce and passionate advocate for diverse voices on our stages I see the Play for Australia project as a platform to embody what’s possible for our country.” Candy Bowers

“I think such an array of voices will inspire discussion and debate about contemporary Australia – who are we becoming, where would we like to be, and what has been left behind.” Chi Vu

Other Melbourne Fringe events at Arts Centre Melbourne include The Adventures of Broer and Zus and William Elm: Sustenance.