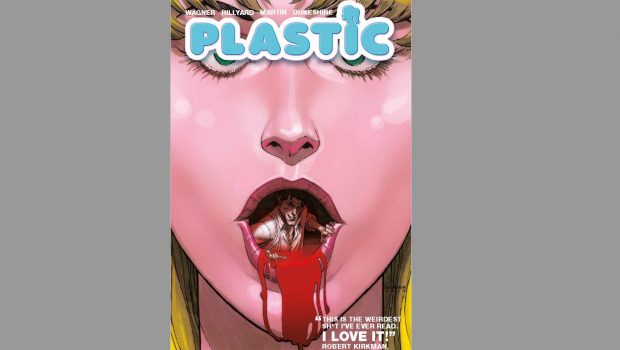 Summary: With a love of donuts and his plastic lover this serial killer is unique in more ways than one.

When the premise of a story is a “retired” serial killer who is touring the country with the love of his life… that also happens to be a sex doll you can reasonably assume things are going to be weird. But weird can be good and Plastic is definitely full of the good kind of weird… well maybe good is a subjective word. 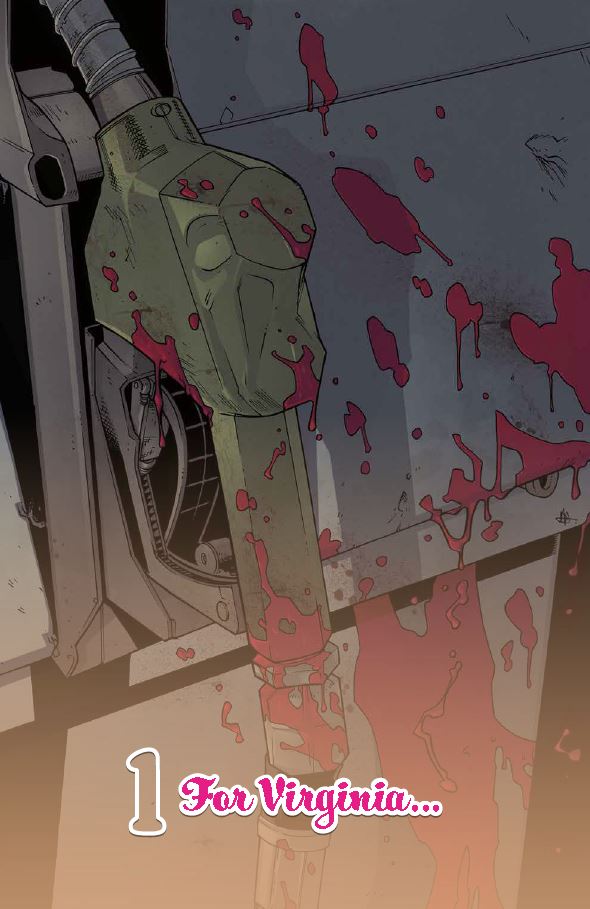 How do you come up with this sort of story? I could almost imagine doing research for a new comic based on a serial killer and while doing an internet search some spam pops up for the latest and greatest sex doll… these two ideas merge and force the would be writer to put down his donut and rough out a plotline. Well that’s probably not what happened but Plastic is certainly an interesting mix of the bizarre. Though our main character is noted as a “retired” serial killer, he really seems pretty decent. Throughout the story you can almost understand why so many people who are asked what they think when they are told their next door neighbour was in fact a mass murderer reply with “he seemed like such a nice quiet guy”. Our protagonist here certainly does seem retired. He just wants to enjoy the company of his girlfriend (who happens to be a sex doll), tour the American backroads and enjoy the variety of donuts that are on offer. But sometimes other people get in the way of our enjoyment of life and when someone stops our anti-hero from enjoying his life… he ends theirs. 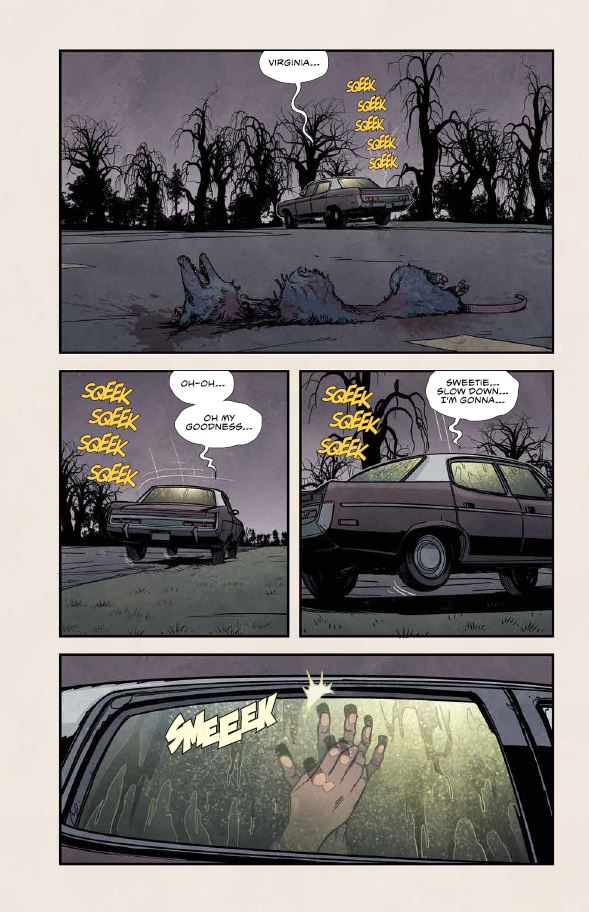 Daniel Hillyard and Laura Martin do a great job of transitioning from depicting a person who seems like a nice easy going person, to someone who seems possessed with all the evil of the world and the ability to let that evil out. There are some great uses of shadows to really drive home the menace of our main character and that is countered brilliantly with the seemingly sweet and innocent easy going expression he exhibits on other occasions. We get a great sense of the duality of Edwyn and there is no holding back on depicting the violence that he unleashes on those who would interfere with him or offend his partner. 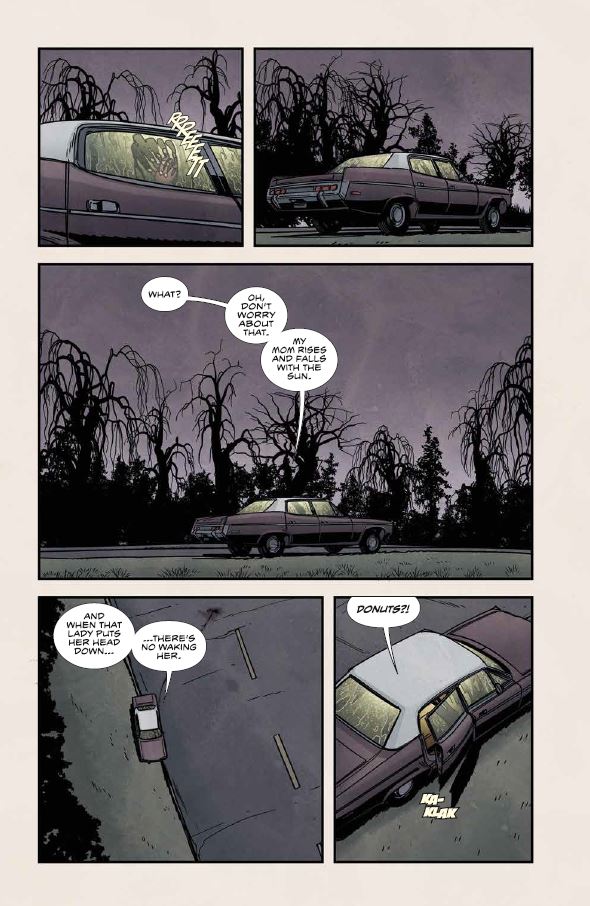 It can be hard to make a horrible person seem likable yet that is exactly what Doug Wagner has done. Perhaps if we knew of all the murders that preceded this story we might be a little less inclined to have a soft spot for our donut loving plastic aficionado but as it stands we get to see someone who seems nice enough as long as you don’t upset him. The only people we see facing the wraith of Edwyn are those who are obnoxious and generally not nice. Do the people he kills deserve to die? Well perhaps not, but we can at least appreciate that they needed to have a bit of justice meted out to them and with only a “retired” serial killer around to teach them a valuable lesson… they will just have to accept their fate. Perhaps Edwyn may even find a bit of redemption… or not. 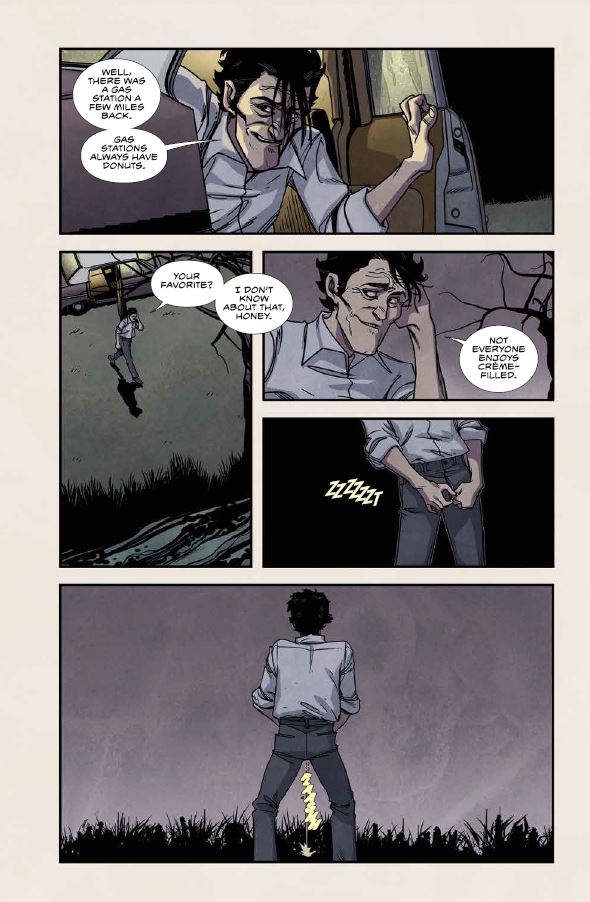