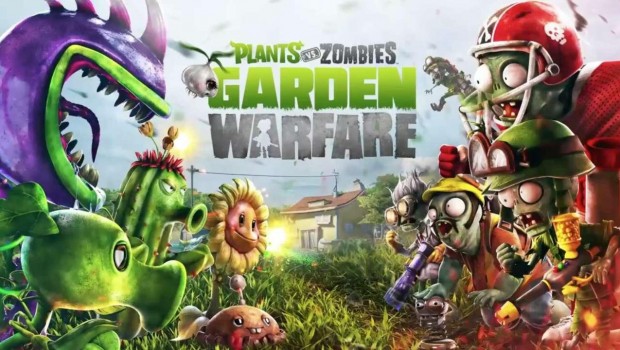 Summary: Plants vs. Zombies: Garden Warfare is an instant classic...its a no brainer.

Fast action paced shooters have a defined genre, we see a lot of them out there and they are hugely popular. So when a company comes along with a whimsical weird concoction that is actually appealing and somehow addictively fun… it’s all hands on deck for Plants vs. Zombies: Garden Warfare.

The game world’s graphics are bright and fun, taking a familiar genre and infusing it with a good dose of silly fun.  Just to get it out of the way early on here, I would say the only down side to the game is even if you want to play solo…online game play access is required to play the game…period. The game is clearly geared towards multiplayer. Though to have a single player option and still be required to have an online game play subscription to even play just is rather odd.

Now in all due fairness most consumers/gamers should not be caught off guard since the packaging on the back clearly states “Online play is required.”

Now that that unpleasant reality is moldering in your mind let’s talk about this unique often fast paced shooter. 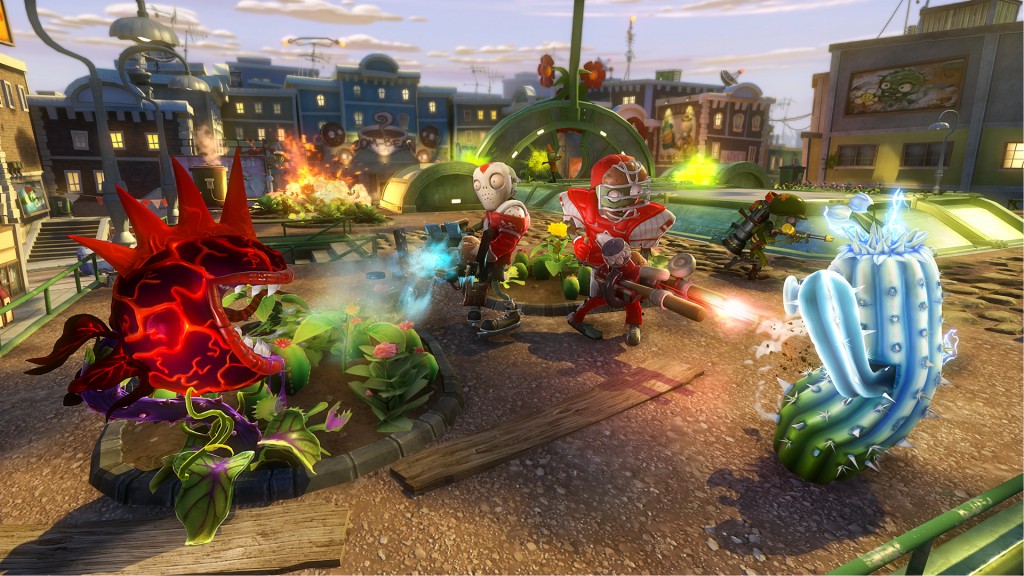 Plants vs. Zombies: Garden Warfare is a third person shooter multiplayer game. It mixes a lot of familiar gaming like tower defense and puts a quirky twist on it. This third game in the well-received Plants vs. Zombies series is developed by PopCap Games and published by Electronic Arts. Much like a Zombie virus it has spread to most platforms covering Playstation 4, Playstation 3, Xbox 360 and Xbox One.

The characters and the premise may be whimsical, but the character class system is surprisingly diverse and delightfully in depth yet simple at the same time, and that’s a feat unto itself… Neither side seems to be over powerful, there is good balance amongst the character classes.  Players can play either as Plants or Zombies and each class only has three abilities each. Oh but what fun these abilities are.  Exploring the different classes and what abilities they have to offer is part of the fun of the game. There is so much fun things here with each character class that there is plenty to keep a gamer interested and coming back for more. 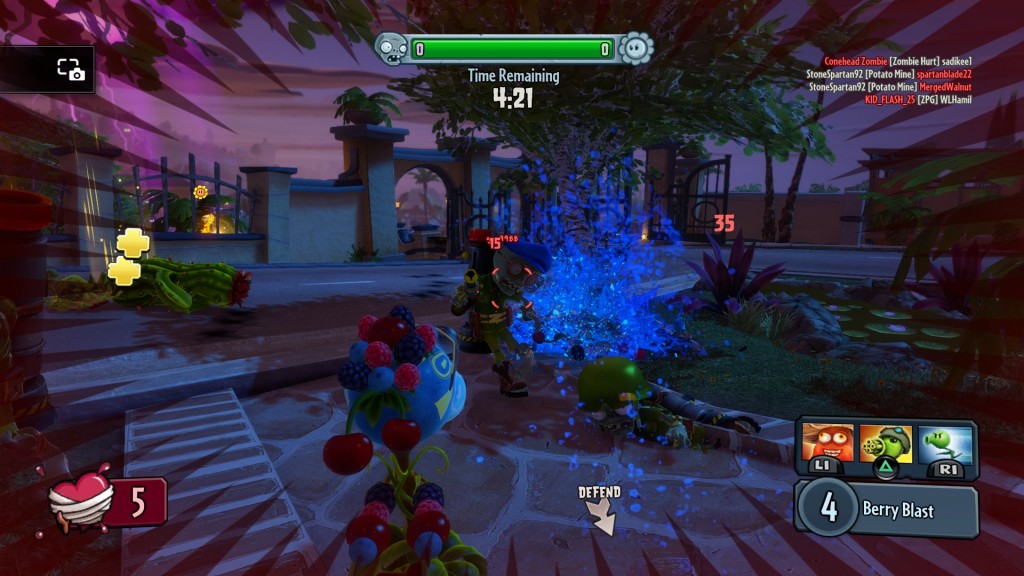 From the start of the game there are four different character types available for each side…both Plants and Zombies. As the game progresses there are an additional five different variants of each character type that become unlocked.

The variants all share the same basic stats as their counterparts…but they do look different, this includes a variant of the primary weapon they have.

Now do not fret, there are more character types to add to the zany mayhem and fun. These other types are all A/I controlled and act as re-enforcements for either side. These extra characters run by A/I can only be acquired by getting packs from the sticker shops in the game.

For the plants side, ten different plants can be created by planting them in pots that players can find on the battlefield. For the Zombies, there are nine other Zombie types that can be found on the field of battle by spawning them from dirt mounds.

The game has co-op and competitive multiplayer game modes.  Cop-op is designed very well with incentives for actually playing cooperatively. Such as reviving a downed team mate will take a point away from the opposing team. 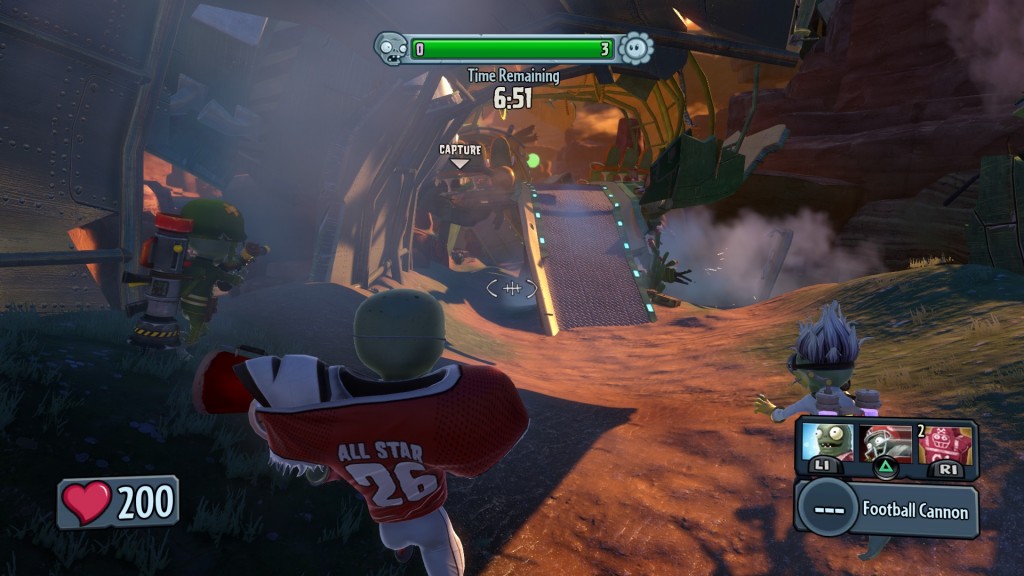 For a game that has only four competitive multiplayer modes and a co-op mode, the different variations on the game modes it does have…. keeps it somehow fresh and fun. That is the big draw here Plants vs. Zombies: Garden Warfare  on top of the diverse and fun character classes, the good balance of classes and abilities and weapons, and the customization…the maps for the different modes are very well done. Offering challenges for whatever side is played.

The multiplayer modes are a mix with in game and DLC modes… what’s not to like here?

Garden Ops, which is a Co-op game that has up to four players controlling the plants as they fight to defend a garden. The players fight off waves of Zombies, which later waves have boss Zombies in them, making for a hectic battle for the players.

Vanquish Confirmed is a mode where players collect orbs from dispatched enemies in order for them to get credit for the kill. Sort of like Death Match…but not.

Team Vanquish, this is the same as Vanquish Confirmed only with teams.

Suburnation, is a domination kind of game mode.

Gardens and Graveyards, players as Zombies go for capturing various things in the game match, while Plant players seek to defend. 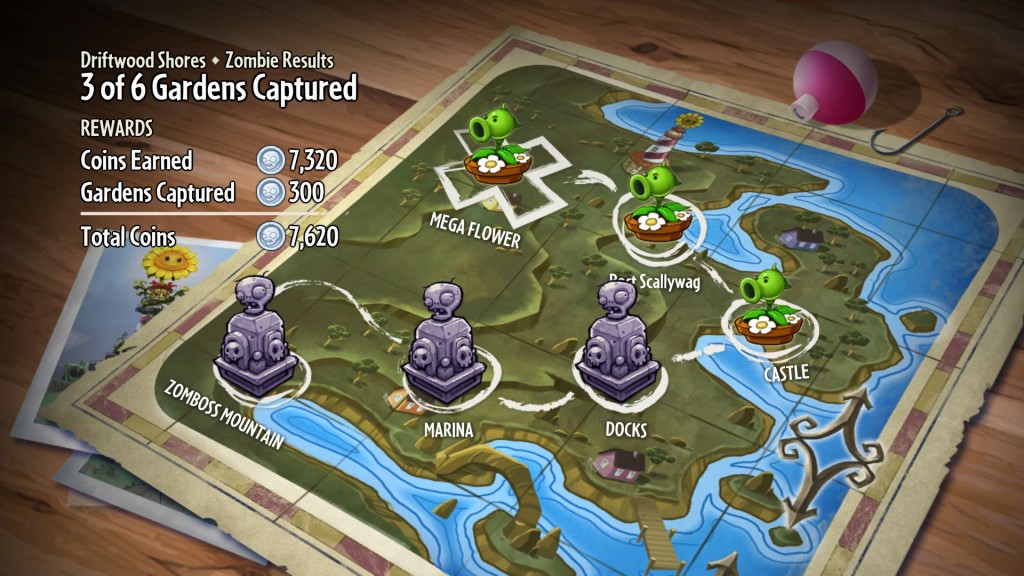 Welcome Mat, this one is more for new players it’s Team Vanquish with no customization and one map.

Gnome Bomb, this is one that is a DLC. The game mode has players trying to secure a bomb to a Garden Gnome in order to make it explode at different bases.

Mixed Mode, an alternating game that bounces between players being on one side and then the other on the next round.

Then there is Boss Mode and it took me a couple moments to realize where it’s at. When choosing a character before a multiplayer match the option for Boss mode is there….this mode that allows one player to command the battlefield from the skies. It is available in all game modes, but only one player per team can use the Boss Mode at a time. Players using Boss Mode as a Plant plays as Crazy Dave, and on the Zombie’s side the player is Dr. Zomboss. In Boss Mode, the player gets that birds eye view of the battle below and can rain down attacks or help their team mates with health or resurrect after they are down.

I can only vouch for the controls for the PS4 version of which this review is about. They are smooth responsive and simple to the point. Which is a good thing, because Plants vs. Zombies: Garden Warfare is all about fun. The fun factor is very high on this game. It’s one of those multiplayer games that comes along that surprises you just how much fun it truly is. If you are into multiplayer shooter games, this one is for you. Plants vs. Zombies: Garden Warfare is an instant classic that we will be playing for a long time to come. If it had a single player mode that you did not have to be signed onto a game net work to play, the game would have been close to a perfect ride.