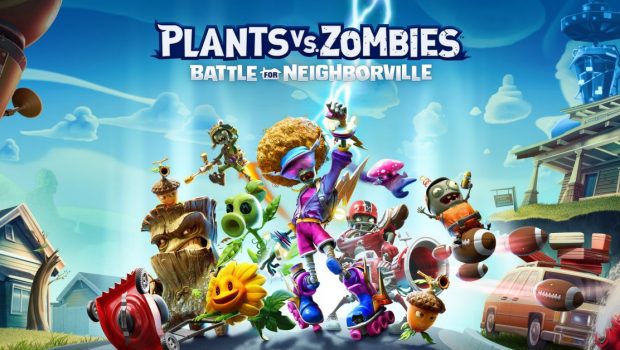 Summary: It’s not going to convert anyone who didn’t enjoy the previous titles but for those seeking a hectic and family friendly take on the online shooter genre, there’s a lot to like here.

EA’s latest turf war has emerged from the weeds, but is it a blooming success or should you just say “Sod it”?

EA’s Plants vs. Zombies: Garden Warfare series has effectively cornered the market when it comes to family friendly shooters not named Splatoon, taking the basic premise of Popcap’s original tower defence games and transplanting the characters into a vibrant and cartoonish arena of fast-paced and comical combat. 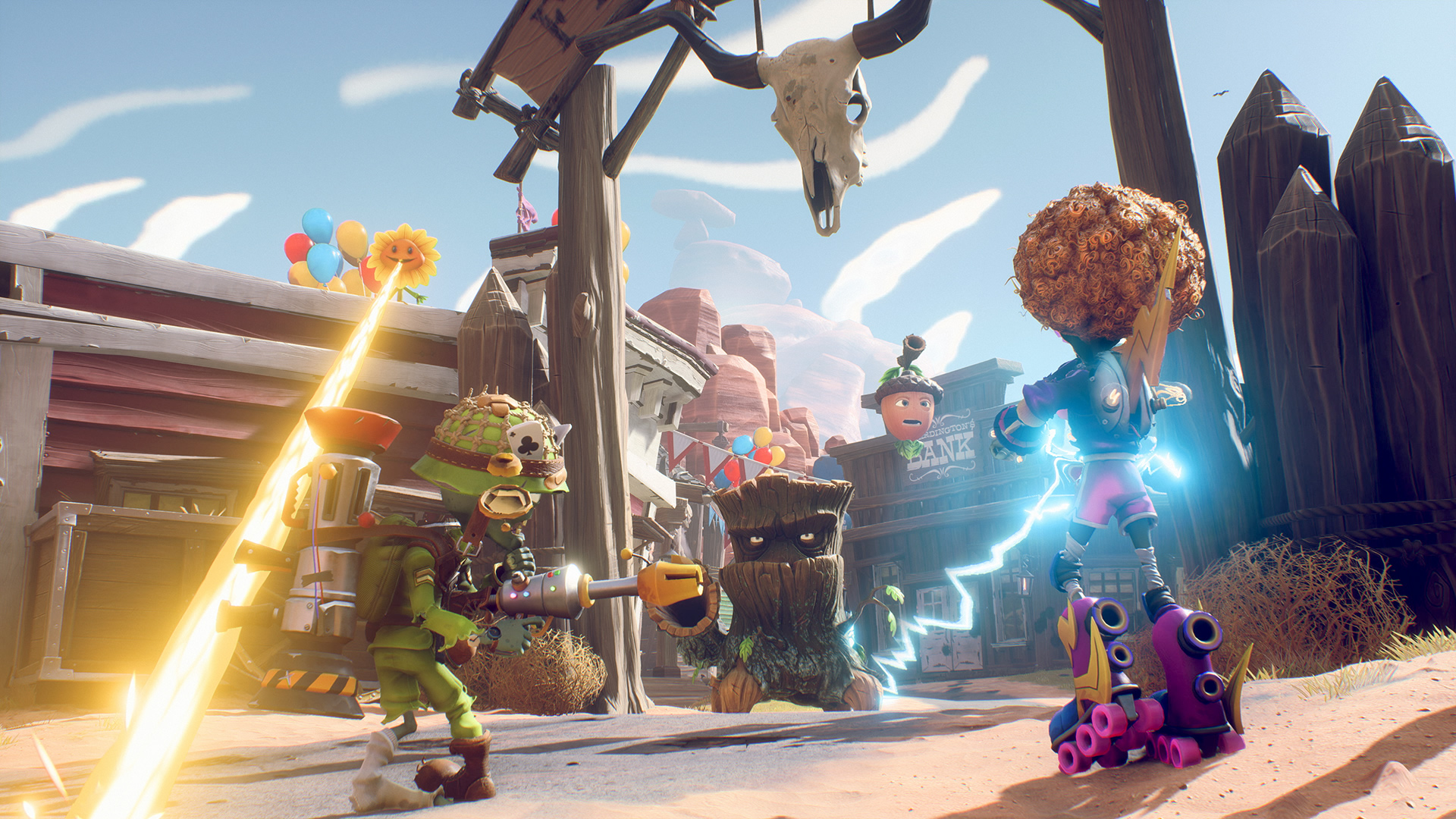 As with the previous two entries in the series, Plants vs. Zombies: Battle for Neighborville succeeds primarily on the strength of its online multiplayer options rather than the generally lacklustre single-player components, with the cast of characters predictably updated with a few new additions joining the ranks and serving to shake things up a bit.

Essentially, however, it’s fundamentally the same game as in previous iterations and your enjoyment of the series is going to depend on how much you dug (Heh) the previous games in the series, with the minor tweaks and additions to the game not really changing the core conceit of the game in any real meaningful way.
Of course, this isn’t necessarily a bad thing; after all, if you’re onto a winning concept then why change it and risk alienating your existing fanbase on the pretence of luring a few new players into the fold?

As is to be expected, the multiplayer component of Plants vs. Zombies: Battle for Neighborville is robust and offers up a fairly varied selection of modes to choose from; you have the prerequisite Team Vanquish, a horde mode, Turf Takeover, which is basically this game’s spin on Conquest and more, with the only noticeable new addition being the more intimate Battle Arena elimination mode, which sees two teams of four go up against each other in an attempt to weed out the weakest link, restricting each player to only a single life. 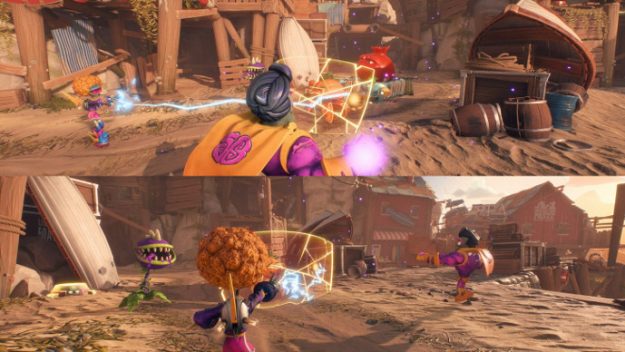 There are no real surprises when it comes to the available modes and, indeed, many of them are identical to the ones on offer in GW2, but when they’re all as frenetic and fun to play as they are here, then the lack of variation or inventive new takes on pre-existing modes doesn’t really factor in to negatively affecting your enjoyment… After all, other blockbuster series’ like Call of Duty have been basically coasting by on the same handful of online multiplayer modes for years and nobody raises an eyebrow.

There are a bevy of customisation options on offer, with currency earned through completing questlines handed out by NPCs in the spacious hub areas you can explore at your own leisure; although I often lamented that you’d have to wander aimlessly around some of the hubs in order to access options that should probably have been rolled into an easily accessible menu, it’d be remiss of me not to admit that the environments on offer here are all brimming with personality and goofy characters abound. 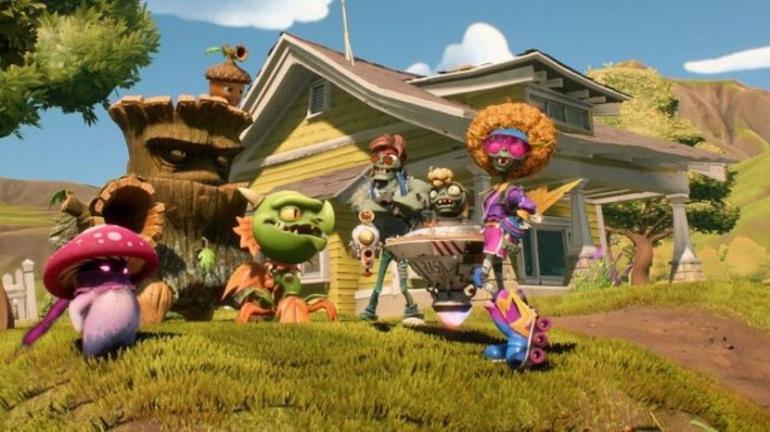 As mentioned above, there are some new additions to the cast of characters players can choose from, with the Acorn and its Zombie counterpart the Space Cadet probably being the most fun to use. Each have their uses as a simple scout class but it’s when they transform and provide multiple weapons for other teammates to use that they really come into their own. There’s also an Action Hero zombie and a stealth-focused melee mushroom dubbed the Night Cap, although fans returning to the series may be surprised to find that there are no longer different variant classes for each character to choose from, streamlining the selection somewhat and relegating buffs and boosts to those manually applied by the player.

The balancing feels spot on here, with no majorly overpowered character that I could see, and victory isn’t tied to whether you have a team with a solid mix of defensive and offensive classes, although synergy between the different characters on offer can help turn the tide of battle if used effectively. 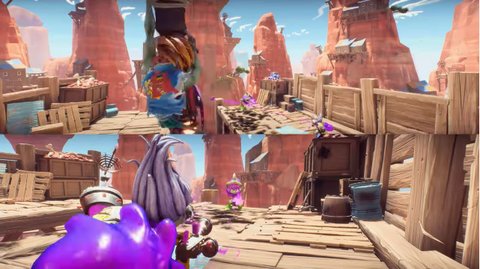 There are, surprisingly, no microtransactions currently on offer in the game, but EA has already admitted that they will come at some point in the future, an increasingly common tactic when it comes to dropping new games – Hold off on the MTX until all the reviews have dropped and then surreptitiously insert them in at a later date, ensuring that the game’s all-precious metacritic score isn’t negatively impacted by the inclusion of this increasingly predatory practice.

It’s an incredibly underhanded way to go about trying to milk extra money out of your fanbase and feels even more disingenuous here considering the target demographic skews much younger than in most similar games. 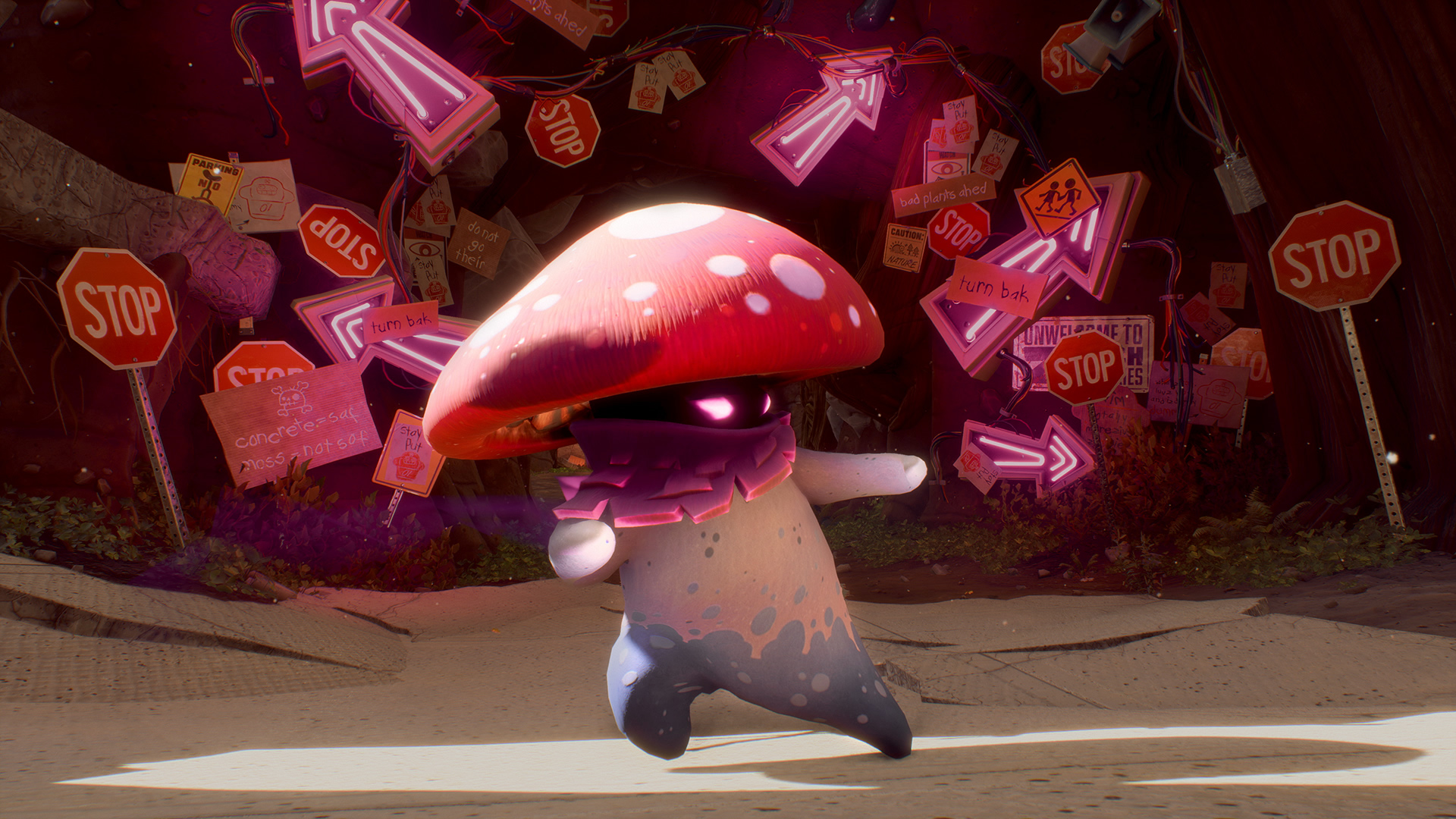 Plants vs. Zombies: Battle for Neighborville is garishly colourful, which makes for a nice change from the drab greys and muted browns of other online shooters, and the character designs and animations all imbue the game with a pleasantly cartoonish aesthetic that is sure to appeal to the little ones without alienating older players who may be deterred by an overly cutesy artistic direction.

The audio is solid enough, although the squeaks and yelps of the myriad characters running around the map can honestly grate on the nerves after a while. 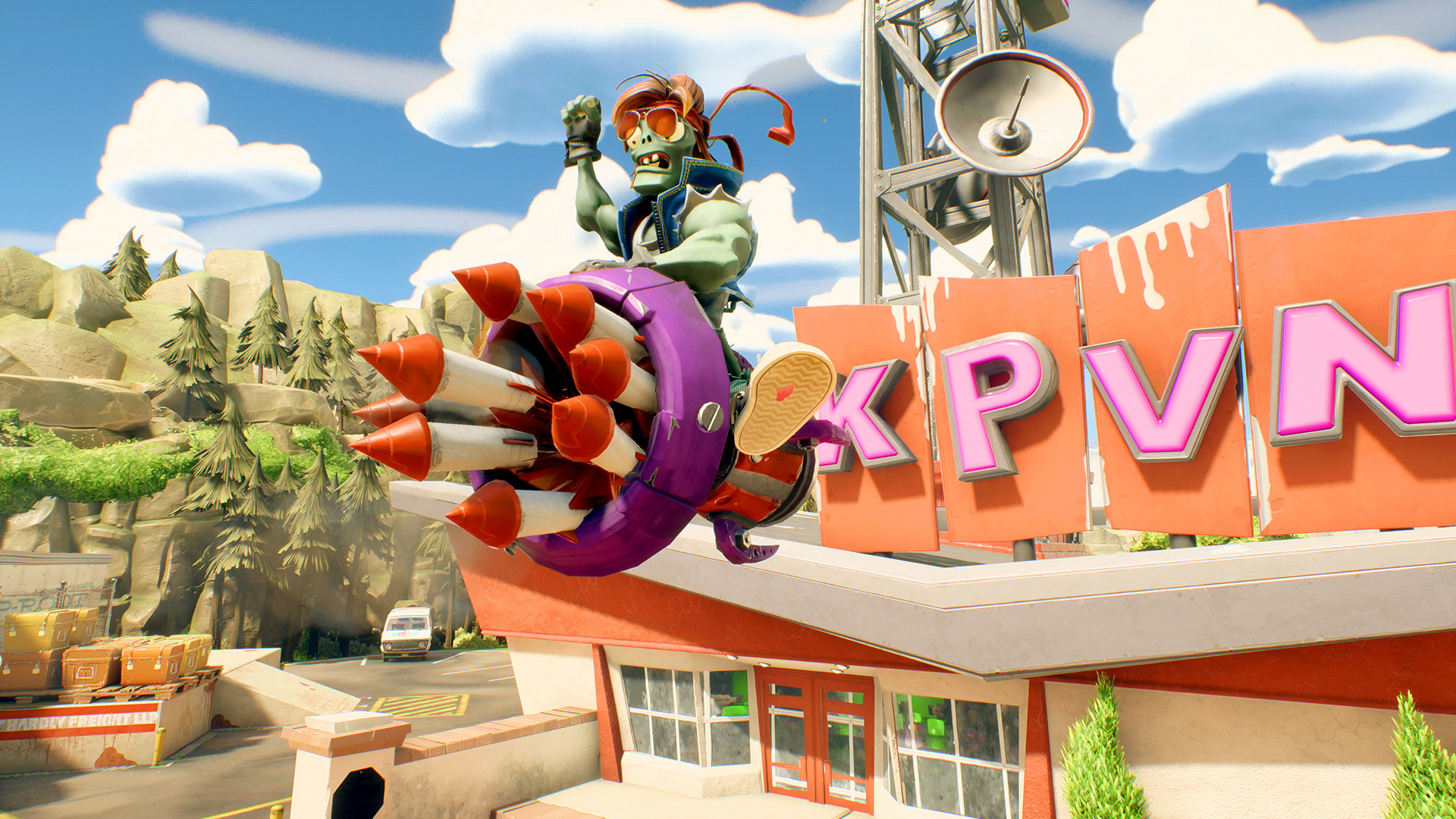 Plants vs. Zombies: Battle for Neighborville is a fun little alternative to all the grimdark and serious team shooters on the market, although the PVE components pale in comparison to the real meat of the game, the online multiplayer.

With a solid balance between character classes, a decent selection of maps and hub environments to wreak havoc within and some genuinely fun new additions to the cast, there’s a lot here to entice long-time fans to give this new iteration a look in. The progression system isn’t as robust as some may like, and the streamlining of certain aspects may be annoying for some veteran players but, considering the target demographic, it’s understandable that EA would make a concerted effort to make the game as accessible as possible.

It’s not going to convert anyone who didn’t enjoy the previous titles but for those seeking a hectic and family friendly take on the online shooter genre, there’s a lot to like here… At least until the inevitable microtransactions turn obtaining upgrades into a tedious grind. Fingers crossed that this won’t be the case but, knowing EA’s track record, one can’t help but be sceptical, which is a shame as it’ll mar what is otherwise a solid and tidy little team shooter. 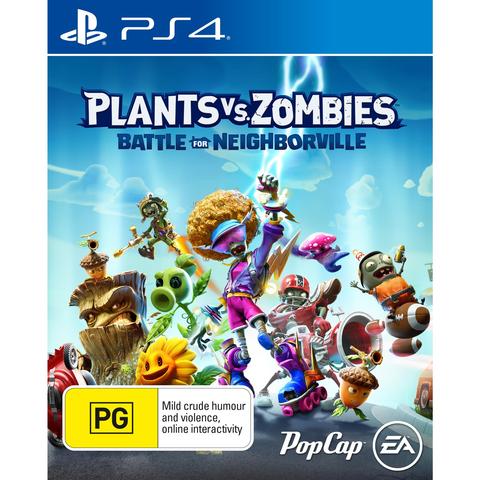