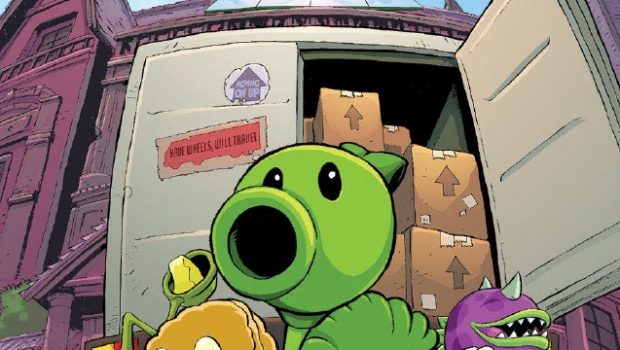 Summary: Not just confined to tiled lanes in someones lawn... the plants are busting to move out on their own... what could possibly go wrong?

I’ve been a fan of the Plants Versus Zombies games since the original outing all those years ago. Since then we’ve got the second game in the main series, we have Plants Versus Zombies garden warfare… and we also have the comic series. I was curious to see just how the comic would tackle the wild and wacky world that the Plants and Zombies inhabit… it turns out, in absurd style. 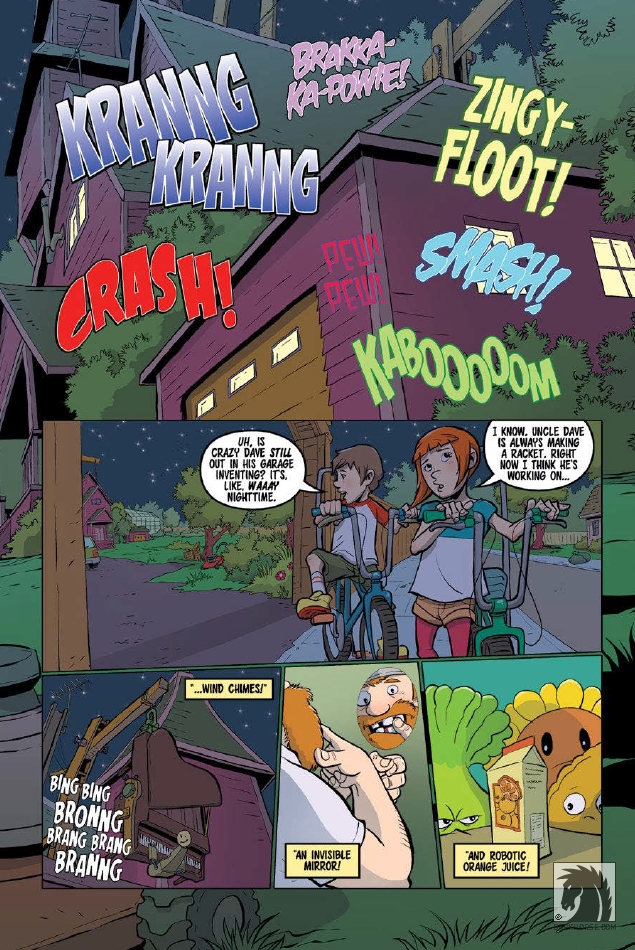 My favourite character in the Plants Versus Zombies universe has always been Crazy Dave and cleverly enough the comic starts with him featuring prominently doing what he does best inventing and making a racket. But the focus soon turns to the plants who are tired and just a bit over the whole living with a crazy genius who is up at all hours… they need their sleep after all. So the task becomes getting the plants into their own place (fortunately Crazy Dave has a family mansion that isn’t being used by anyone else), then making sure they can look after themselves… but it wouldn’t be Plants Versus Zombies without…. you guessed it, Zombies! Dr Zomboss sets about spying on the plants in their new mansion home for his own nefarious needs. 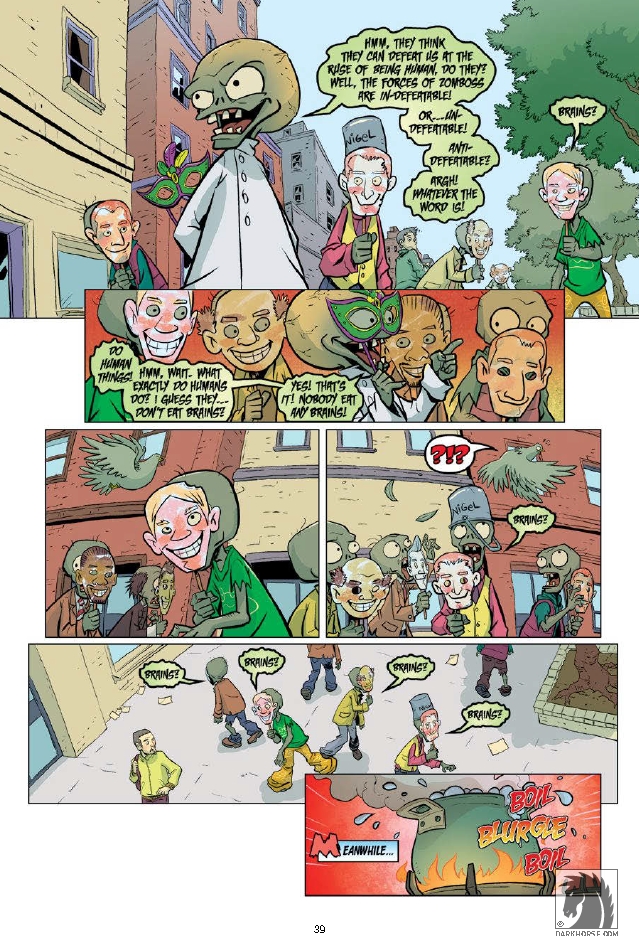 The writing isn’t very deep here… but it’s not meant to be. This is very much a series written for children (or perhaps the young and childish at heart). The feel of the games is maintained through the writing quite well… most notably on the signs and messages from the Zombies with their telltale misspellings of words. It does have it’s own charm but it’s also definitely of a certain style. It makes me think of kids cartoons and their style of humour… cheap gags and over the top characters… if you like that sort of stuff then you’ll likely find some giggles here. 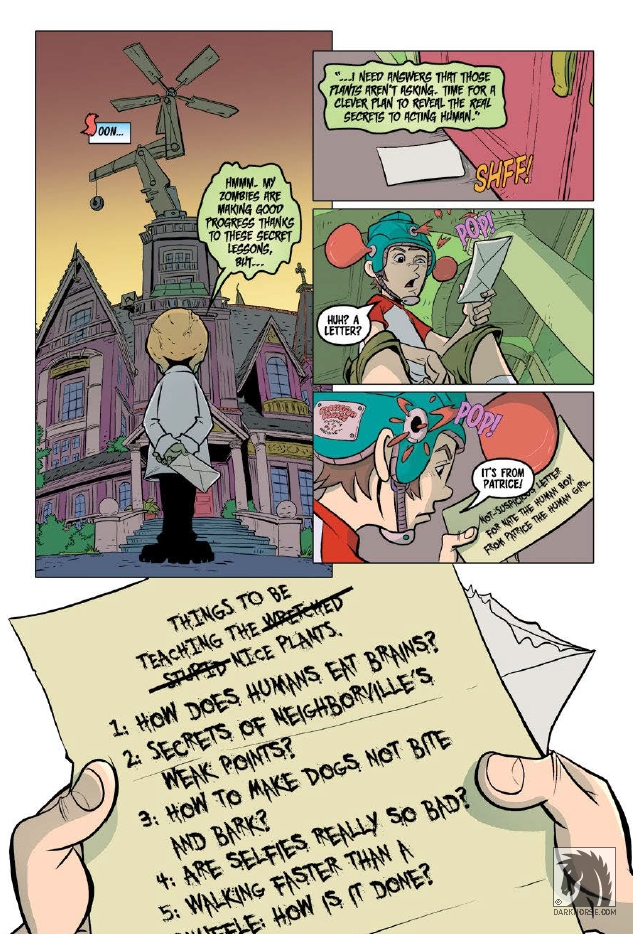 Andie Tong has done a great job here bringing further life to all the variety of plants from the series. He’s also managed to breathe quite a bit of “life” into the zombies and managed to keep their somewhat bewildered expressions conveying their moods with the little expression they are allowed 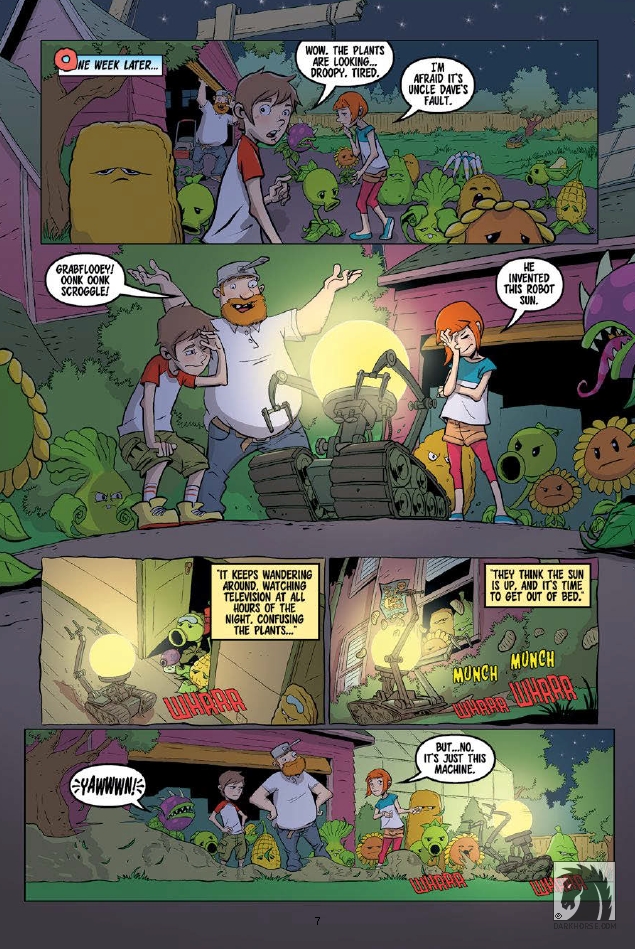 When tackling a world such as that of Plants Versus Zombies… you are both given a starting point, but also a limitation for your writings. Paul Tobin has done well to keep the feel for Plants Versus Zombies whilst also adding some new twists to the world. I’ve been curious as to who Crazy Dave is and what he’s all about… Grown Sweet Home at least puts a bit more context to his life but at the same time he remains an enigma of sorts. The relationship between Uncle Dave and the plants is also more fleshed out which is interesting. If you are a fan of the series then you may well get some laughs from this comic… I’d be inclined to recommend this more to the younger fans though as some of the humour may just fall flat to a more “mature” audience… but as mentioned earlier, if you are young/childish at heart you may well get the same giggles as the more junior fans will when reading this.