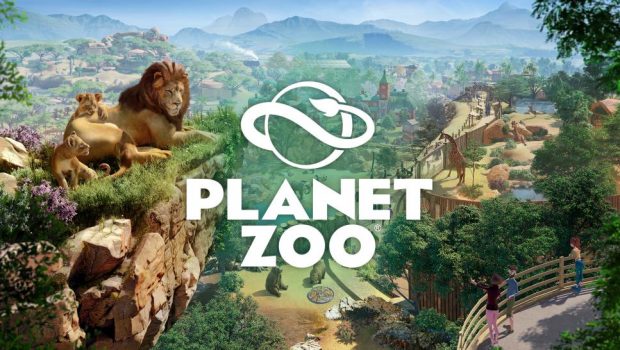 Summary: Planet Zoo is an excellent zoo management sim with an impressive campaign and terrific graphics.

Some people are coming to this review looking for one thing, so I’ll just say it upfront: Planet Zoo is most certainly the modern spiritual successor to Zoo Tycoon that you have been waiting for since childhood. Not only does it recapture the creative, ambitious joy of building and maintaining your own zoo, but it implements a plethora of modern systems and fantastic graphics to produce one of the most fun and engaging management sims that I’ve played in the last few years. 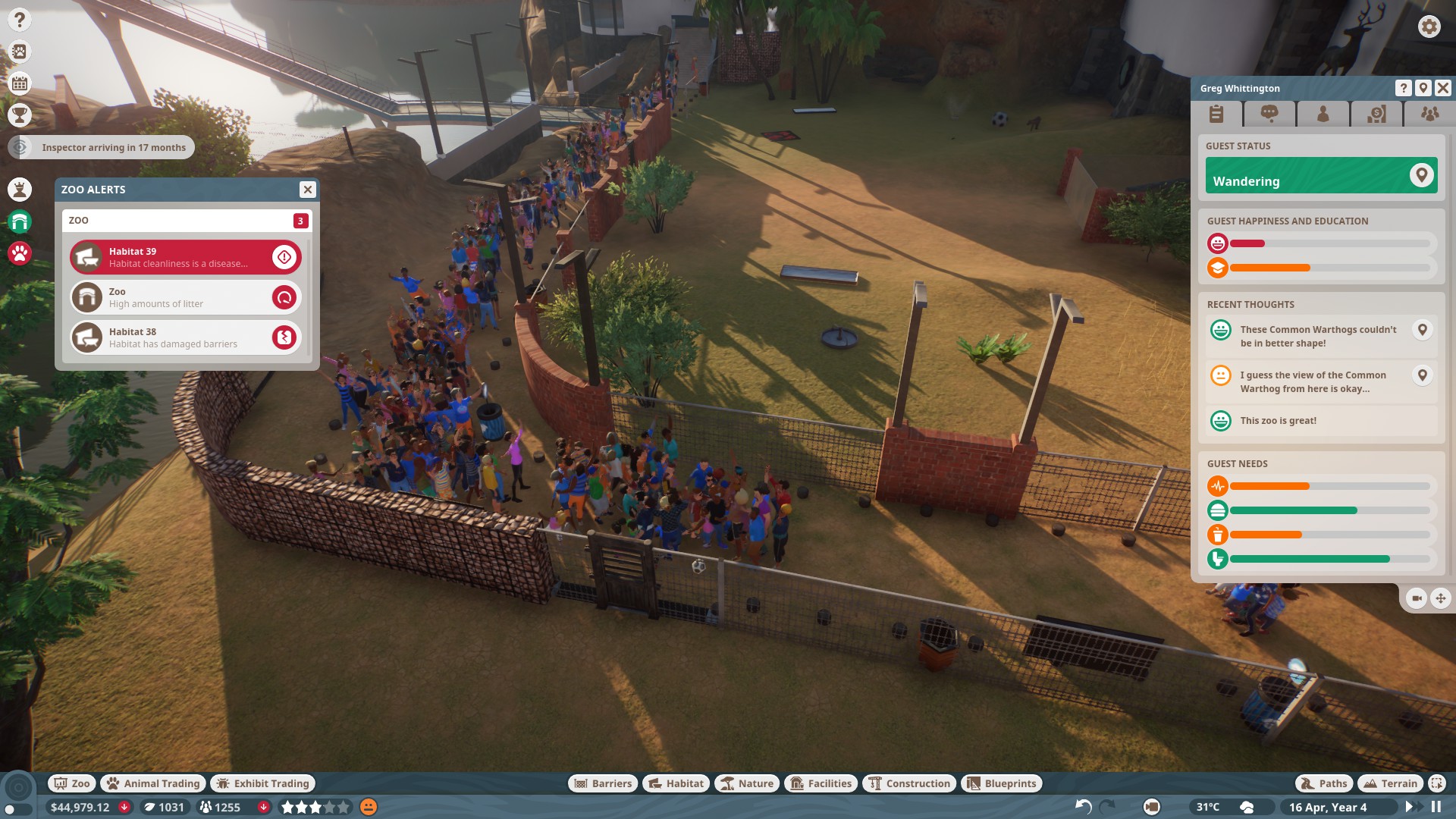 If ever there was a developer capable of revitalising the zoo management subgenre, it’s Frontier Developments. The studio blew us away with their spiritual successor to RollerCoaster Tycoon in 2016 with Planet Coaster, and ever since then many fans (myself included) had been hoping the developer would attempt to work their magic on a similar revitalisation of the classic Zoo Tycoon series. 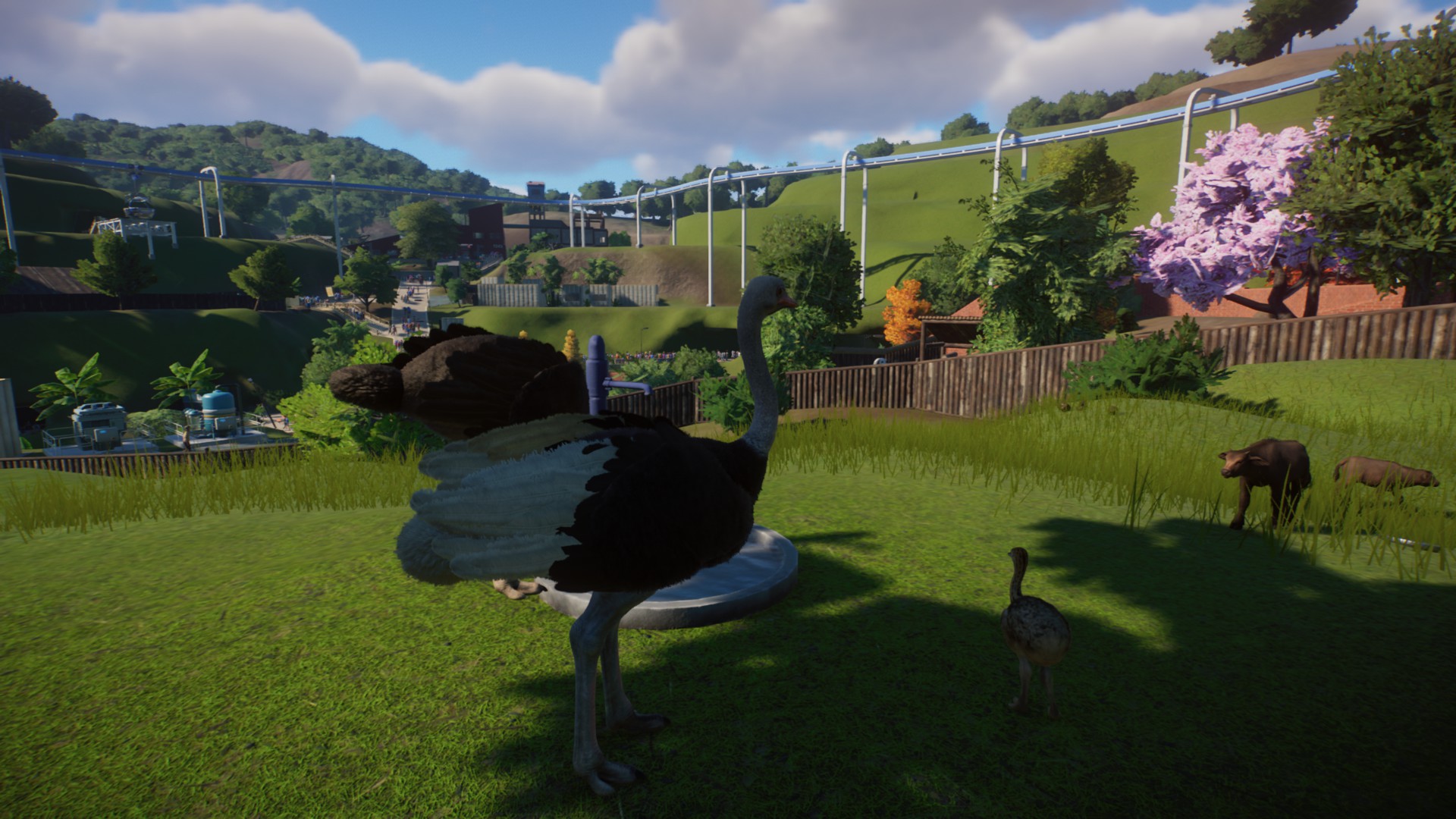 Much like Planet Coaster before it, Planet Zoo offers a variety of game modes for you to flex your creative-management muscles. If you simply want to design a gorgeous zoo to immerse yourself in without the hassle of balancing a budget or maintaining the welfare of your animal residents, the astonishingly impressive creation tools in Sandbox Mode allow you to do so with relative ease. The creation engine allows you to quickly and easily terraform the land and create impressive-looking structures that can be customised down to the most minute detail. Fences, paths, plants and all manner of park features can also be placed and adjusted quickly with the implementation of some clever snapping mechanics that result in more natural-looking features. You can also take your zoo online in Franchise Mode where you can connect with other players to trade animals and visit a friend’s park. 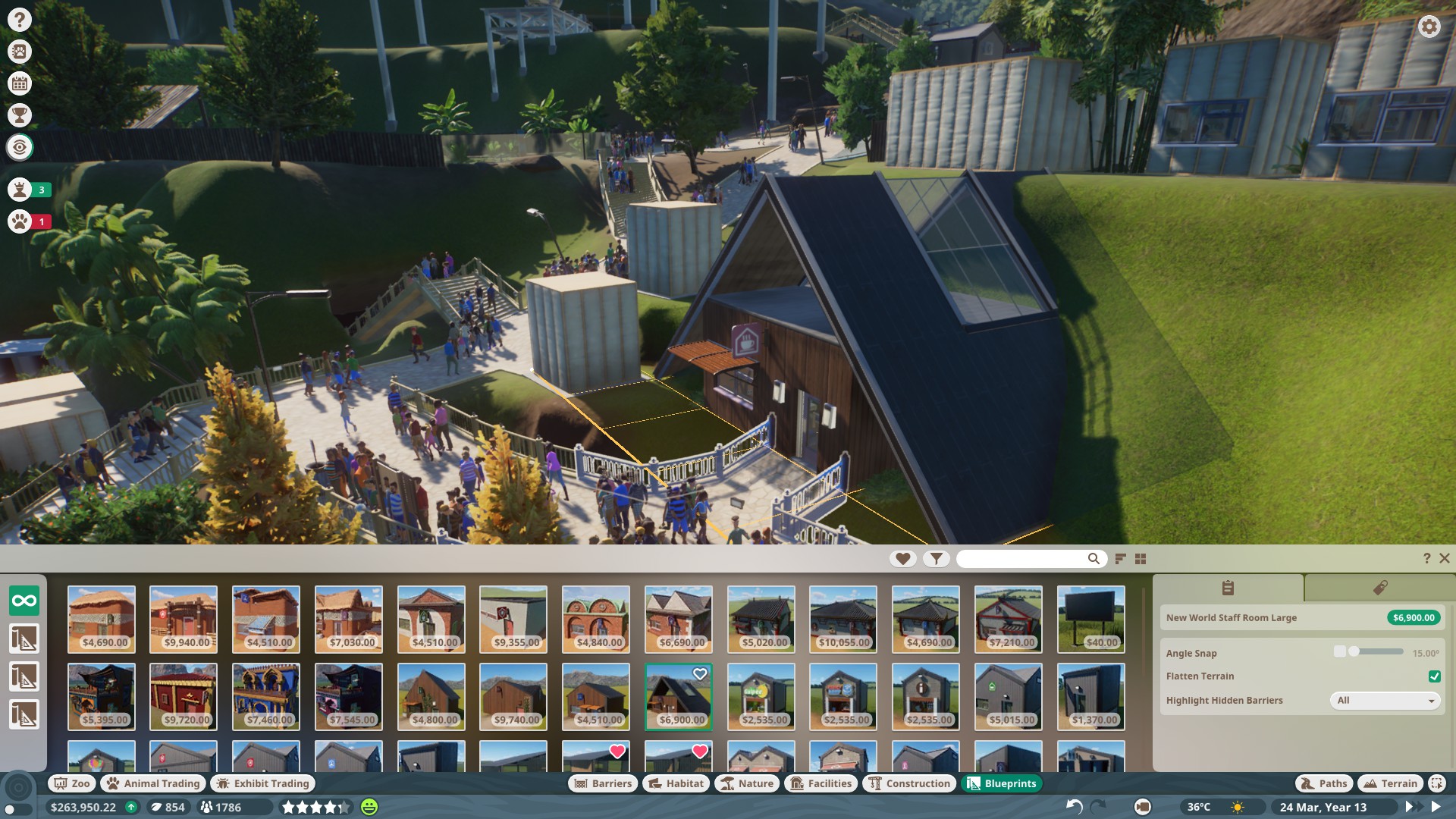 If you’re more interested in the challenge of building, managing and expanding your own sprawling zoo, the Career Mode offers a huge variety of fun, customised scenarios that will teach you everything you need to get ready for the role. Unlike traditional, boring tutorial missions in management campaigns where the entire goal is to complete a specific tutorial sequence, the missions in the Career Mode of Planet Zoo are structured around a light narrative with a variety of characters and a vast range of backdrop circumstances. Each scenario focuses on a different aspect of zoo management and runs through a light tutorial sequence, however I found the scenarios to be so compelling that I often forgot I was participating in a tutorial. One early mission teaches you about crisis mitigation as you track down an escaped monkey in a simian research facility. Another teaches you about electricity generation as you maintain a zoo in third-world country with power-supply issues. 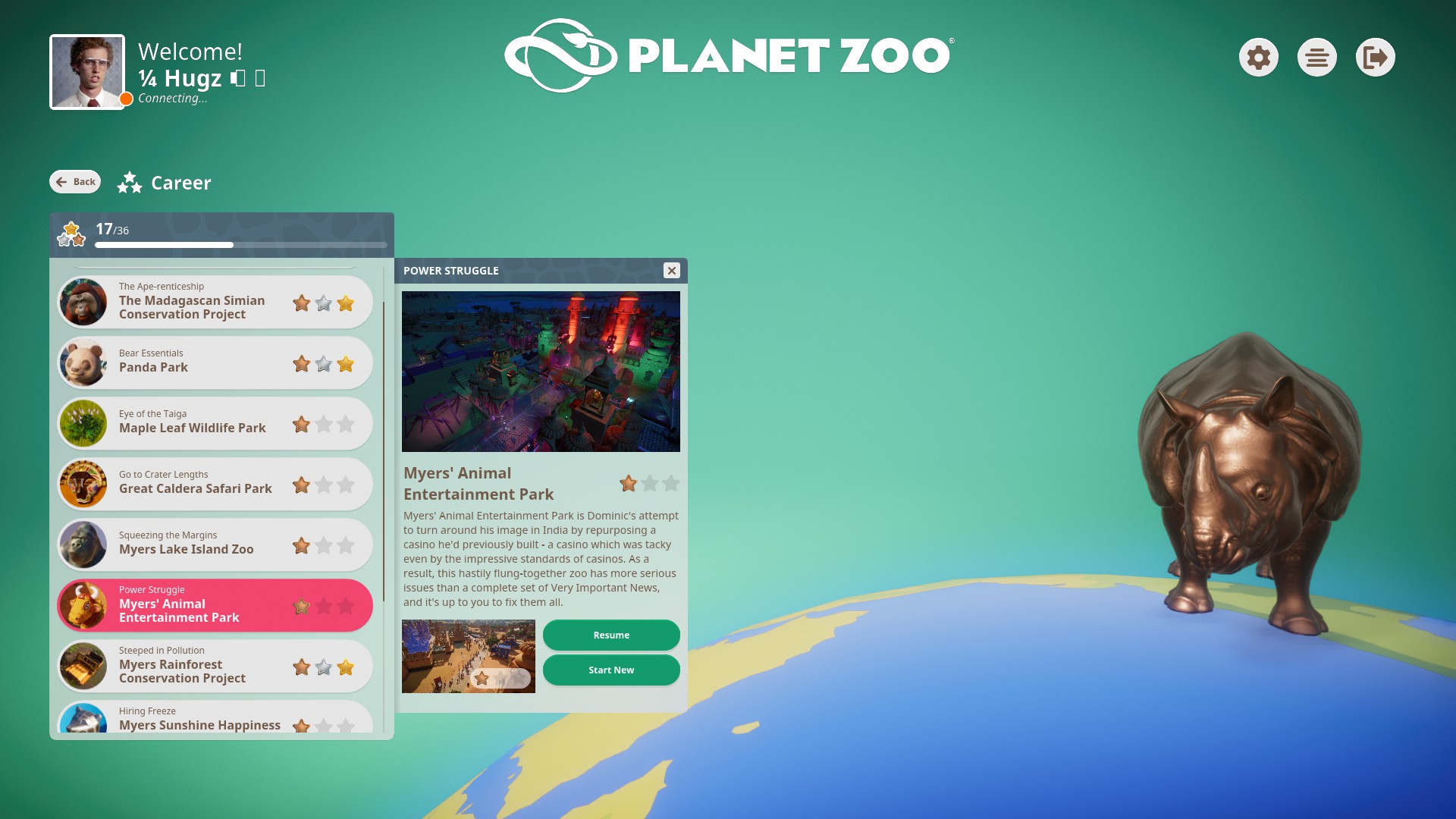 These scenario missions are not only a great way to learn the fundamental mechanics in Planet Zoo, they’re almost a prerequisite in learning how to successfully navigate the deep management mechanics working in the background of every successful park. If you plan on playing Planet Zoo’s traditional management sim mode (aptly named Challenge Mode) by starting small and expanding over time, there’s a huge variety of niche mechanics that you’ll need to become intimately familiar with in order to survive your first financial year. Expect to familiarise yourself with maximising staff efficiency for moving between enclosures, minimising path congestion, tweaking staff pay rates and prioritising research projects. 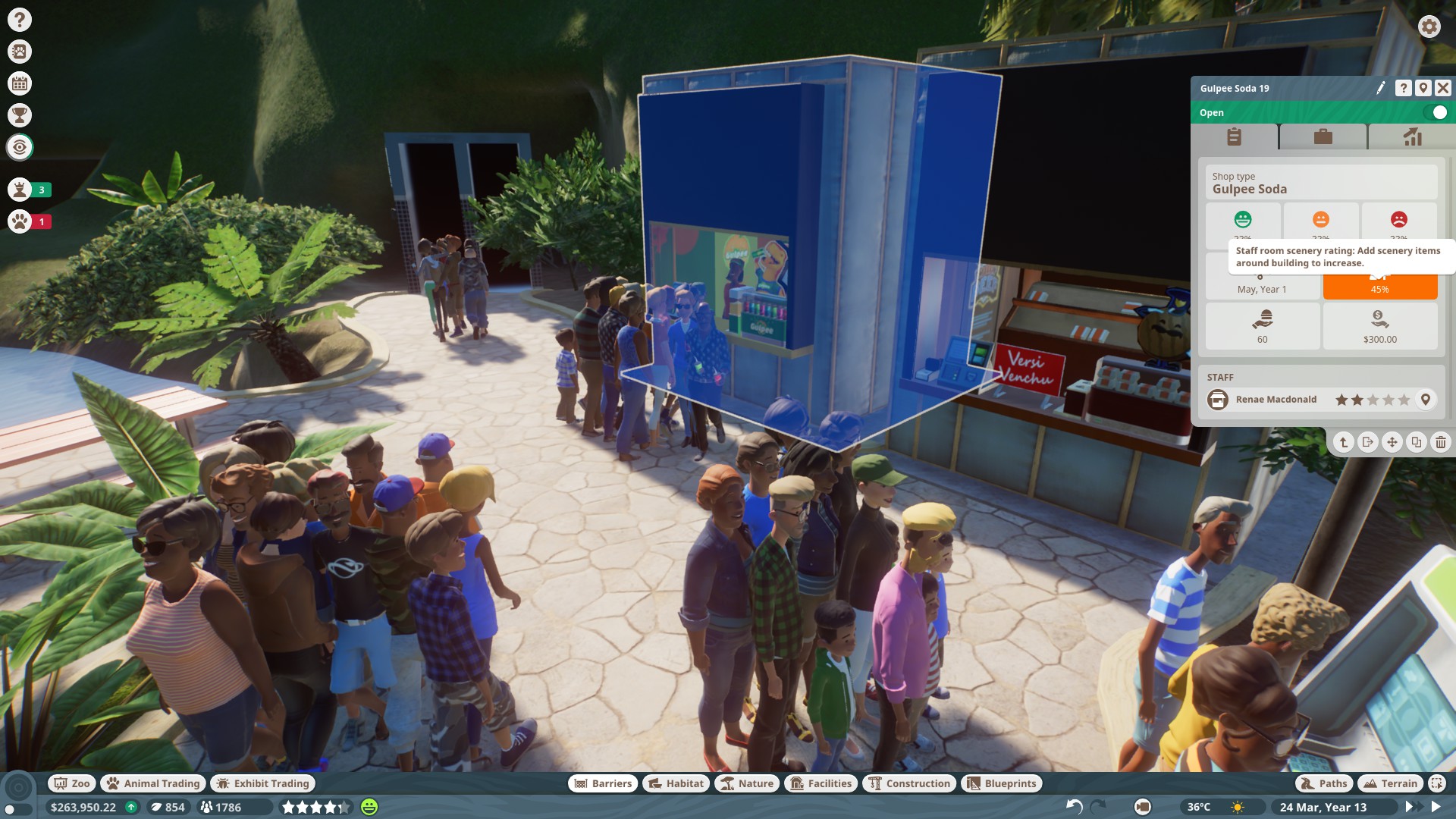 These niche, micro-management mechanics also extend to the animal husbandry side of Planet Zoo as well. With a huge variety of diverse, interesting animals available for you to adopt and care for, you’ll need to modify aspects like enclosure temperatures, plant variety, species social groups and individual animal’s privacy needs whilst also considering fertility rates and various other statistics for the suitability of your breeding program. All these mechanics and more are thoroughly covered during the scenarios in the career mode and are introduced gradually to ensure the player isn’t overwhelmed too quickly. Many of these statistics are also quite easily accessible and the in-game notification system does a decent job of giving you a heads-up of situations before they spiral out of control. 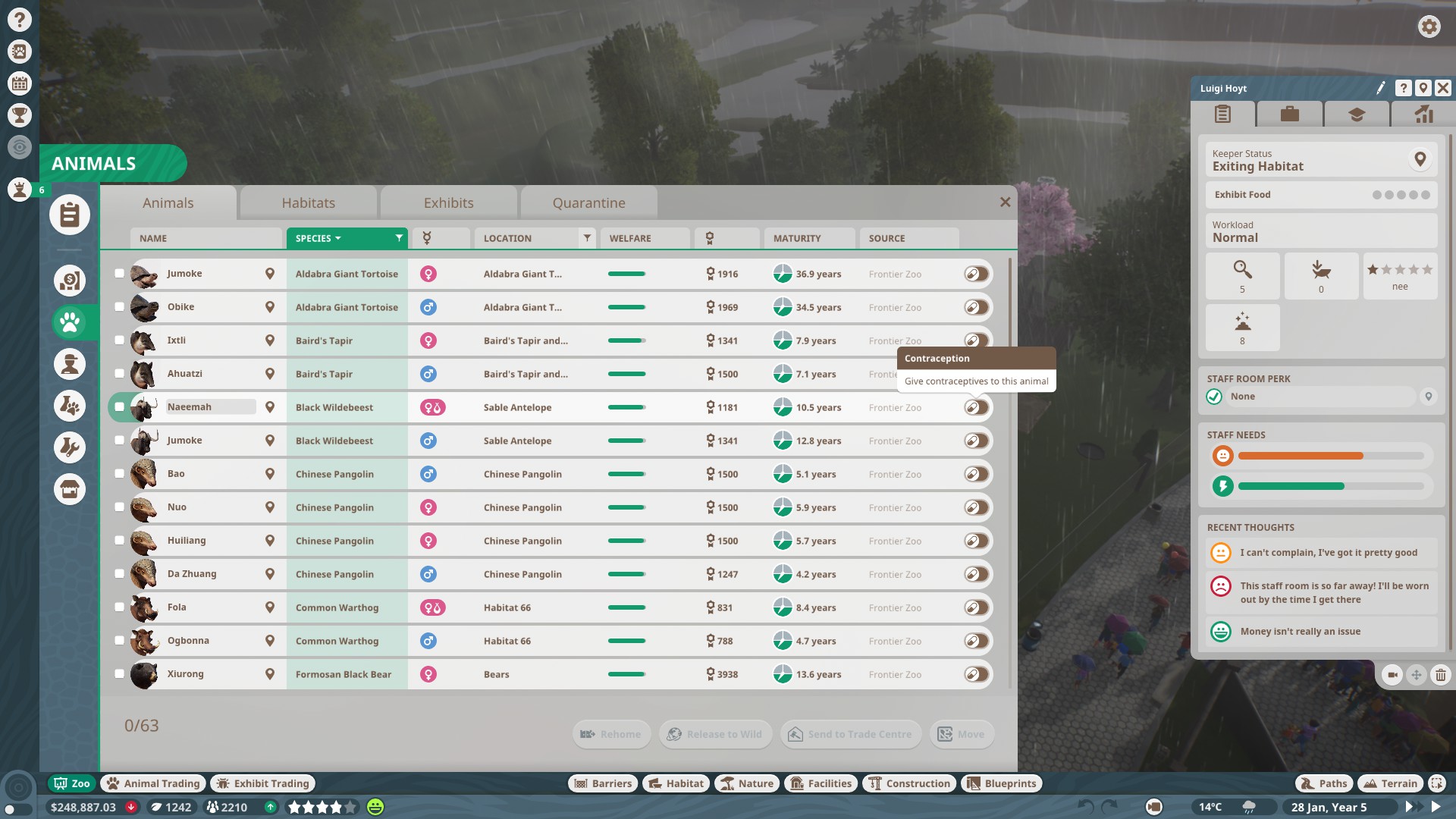 With that being said, the most frustrating part of my time with Planet Zoo was the myriad of little bugs and bizarre scripting issues that compounded to create much larger issues over time. I lost count of the number of my animals that died simply because staff refused to fill food troughs or treat sick animals despite multiple direct orders to do so. I also ran into a number of instances where my animals were perturbed by one issue or another and I simply had no indication of what the problem was, forcing me to delete everything in the habitat and rebuild it from scratch until the animal was satisfied. As frustrating as these moments were, they were somewhat rare and, admittedly, I have a fairly lenient tolerance towards such issues in a huge clockwork simulation such as Planet Zoo, so none of these annoying moments spoiled my appetite to come back to the game. 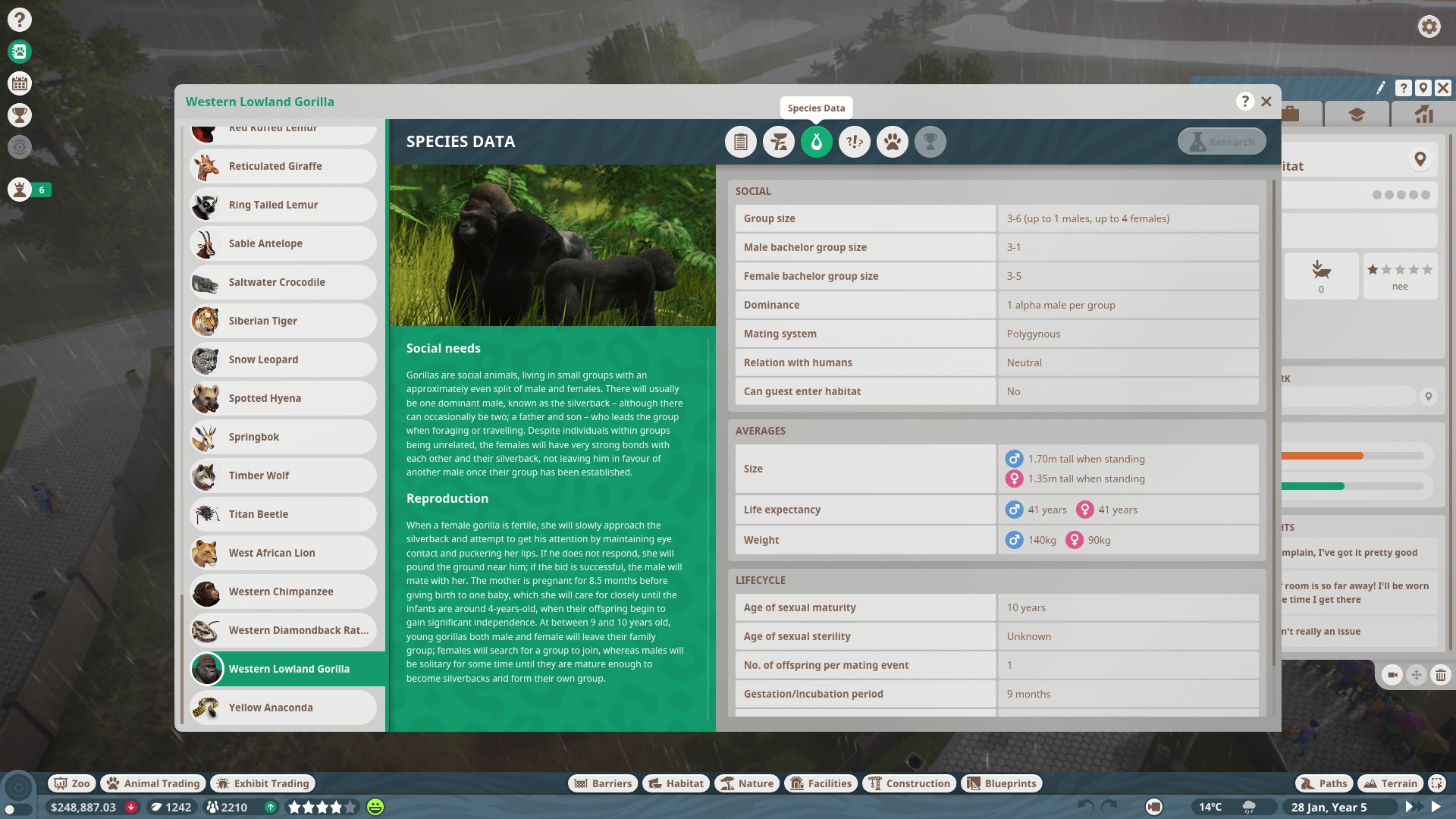 It also helps that Planet Zoo looks absolutely gorgeous. The game has a fantastic lighting and rendering engine that makes the textures on plants, buildings and animals look superb. So much so that I found myself tidying up and paying close attention to the presentation of my parks far more than I usually would. You can also zoom right down to the animal’s level and get a directed feed to watch them go about their business alongside a bunch of interesting facts, which really highlights the impressive animal models and fur rendering. However, I did notice that some weather effects seemed to cause significant slowdown in my larger parks – an issue that may be mitigated by more powerful hardware (my GTX1070 is sadly starting to show its age). 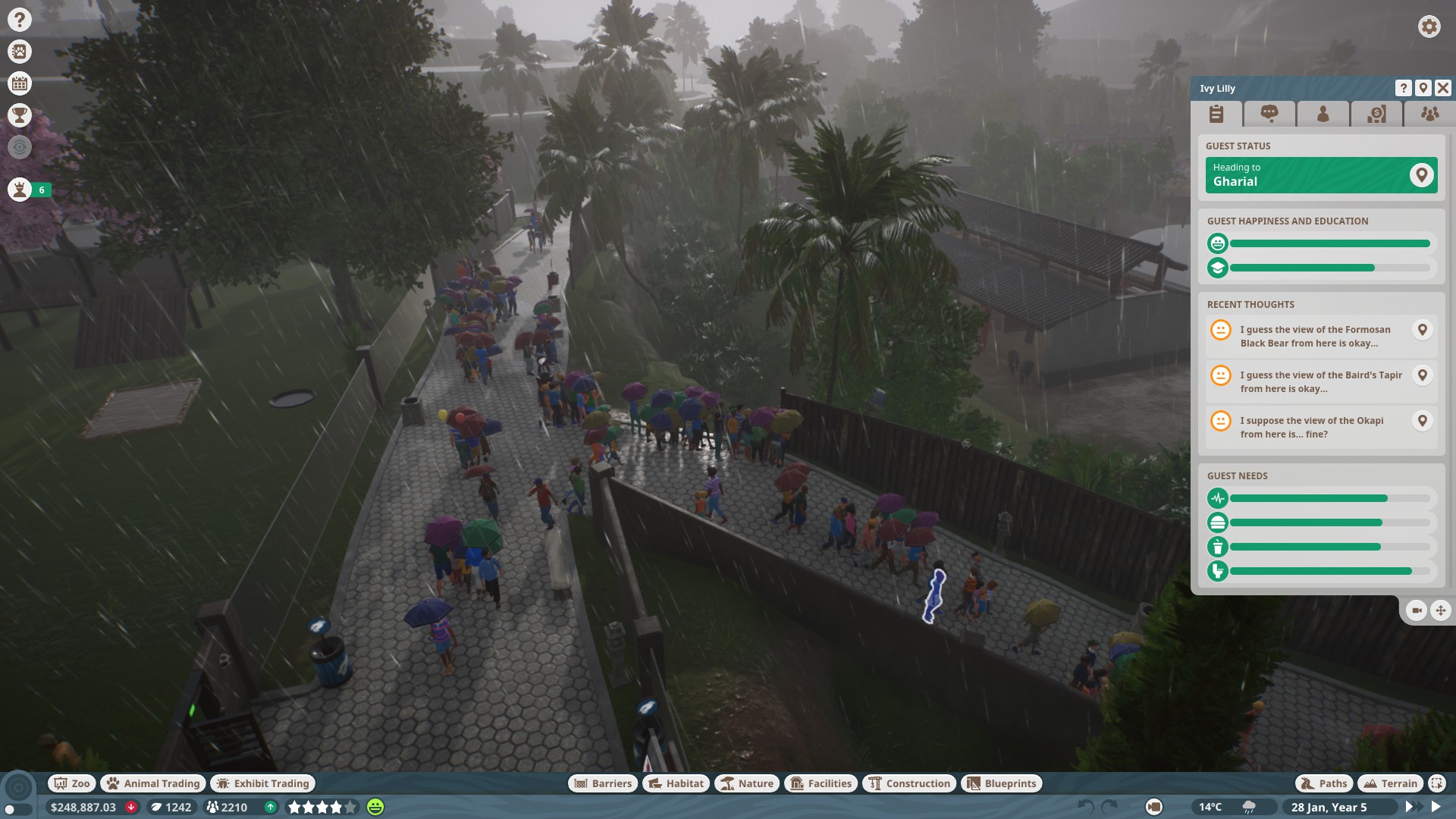 Planet Zoo is everything that fans of Zoo Tycoon and similar park management sims have been waiting for. The deep management systems are extensive, yet intuitive and allow for plenty of customisation whilst providing a decent challenge for those looking to maximise their park’s efficiency. Thankfully, the excellent Career mode does a great job of teaching you the myriad of systems through fun and interesting missions. The powerful creation tools are equally impressive, motivating you to create gorgeous-looking environments for your guests and animals within the game’s fantastic graphics engine. There’s a nice variety of animals to adopt right out of the box and the Steam Workshop integration allows for the sharing of user-made content, which will only add to the game’s replayability. Check this one out if you’re looking for a challenging park management sim or if you simply want to let your imagination run wild to create your dream zoo. 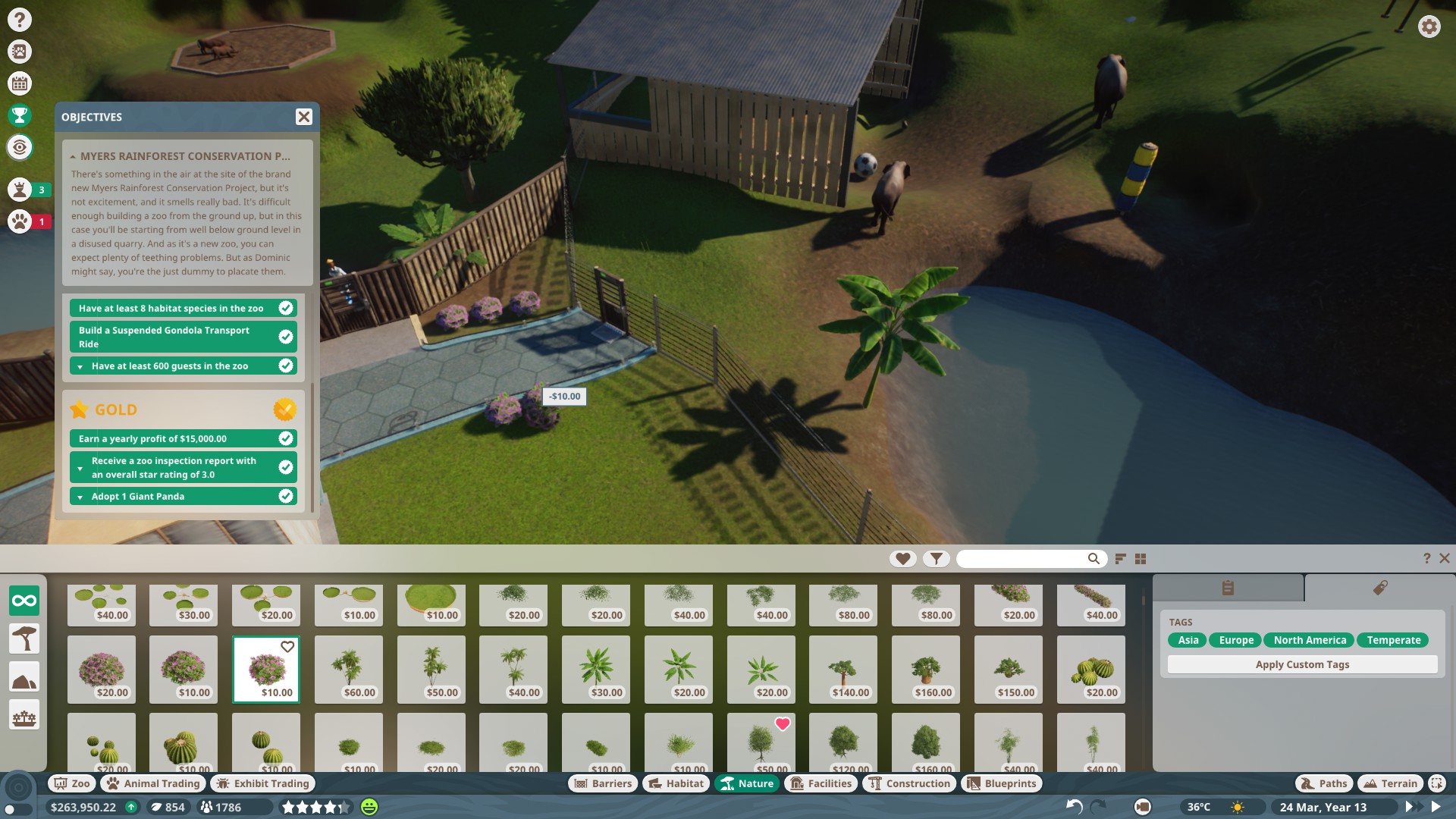 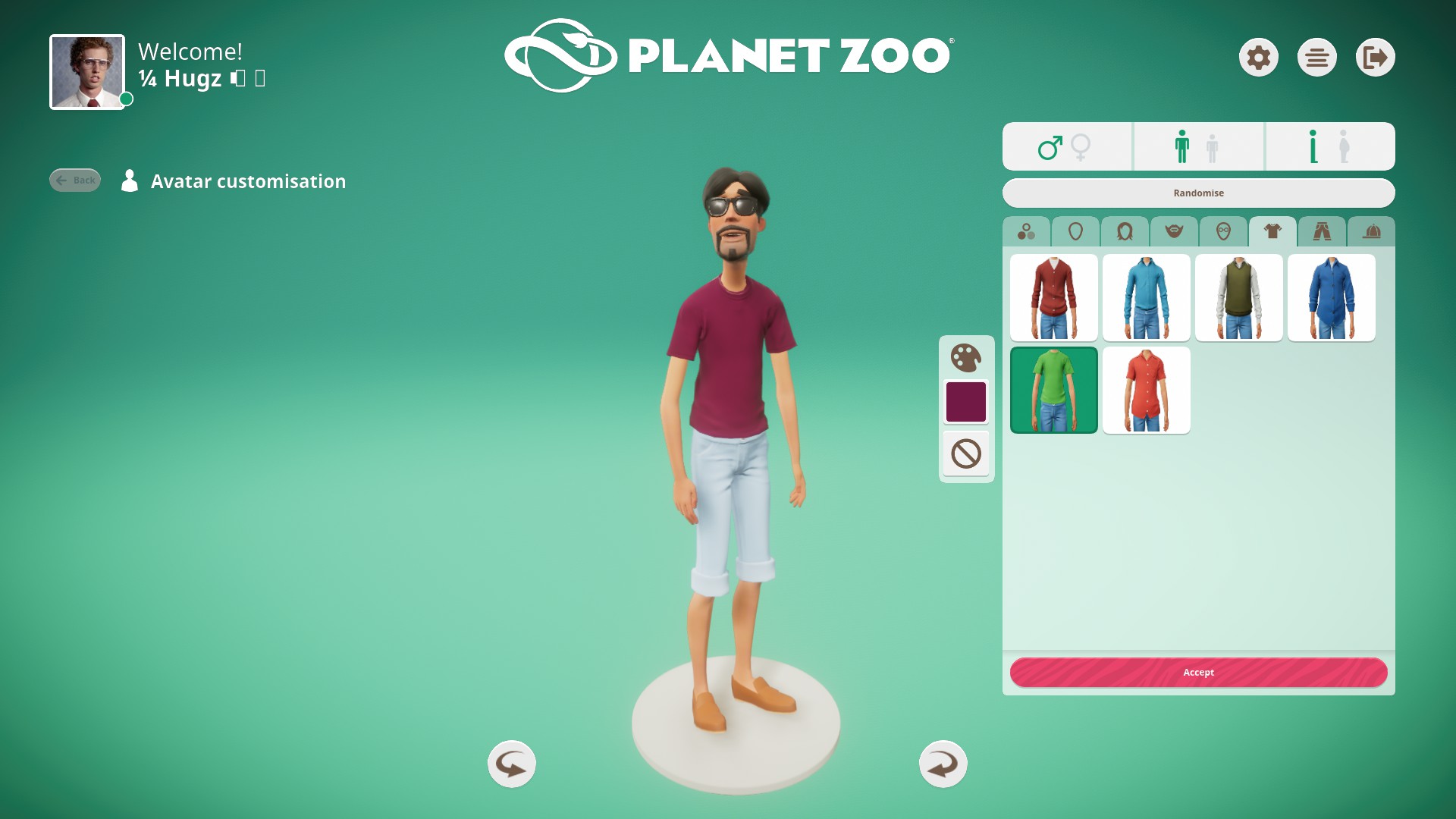