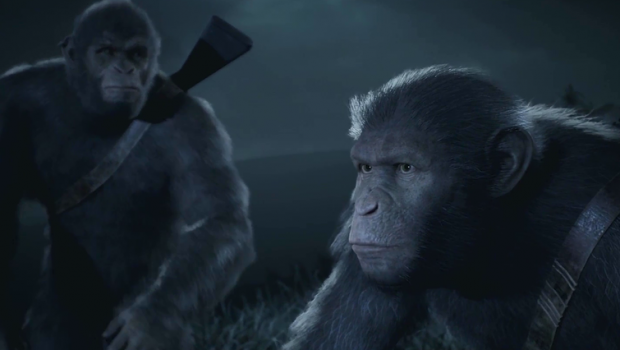 Summary: An ambition cinematic outing that just doesn't have that much to offer.

Planet of the Apes: Last Frontier is the new interactive story, choice-based game set in the world of the reboot Apes trilogy.

Taking place about a year after Dawn of the Planet of the Apes and a couple months before the newest film installment War for the Planet of the Apes, Last Frontier sees the player take control of 14 different human and ape characters as you make decisions and try to keep your favorites alive.

It mostly takes place in the Rocky Mountains and centers on a faction of apes who are trying to escape the devastating war between Caeser and Kobo, which is seen in Dawn. Eventually the faction have to descend from their refuge and try to stock up on supplies, but the only place around is a human-owned valley.

The game focuses on the two leading households of both factions, but straight from the start the game sets up the fact that both sides just want to survive. There is no right or wrong, there is no good or evil, it’s as morally ambiguous as the latest films.

It will take you about 2 – 3 hours to complete, with 3 possible endings and another 3 big character moments that you may or may not come across.

As soon as I booted this game up, one of the first things that struck me was the production company behind it. The Imaginarium. Created by Andy Serkis, the guy who plays Caeser in the latest films, they’ve worked on projects like Star Wars VII, Avengers: Age of Ultron, and the upcoming Mowgli. All very nice looking films.

However the game itself is a little bit disappointing when it comes to the looks. The motion capture is well done, I’ll give them that. Whenever an ape is on screen, the movement is really well done. But visually, it leaves a lot to be desired.

The voice acting is pretty good all round. The apes don’t do much talking, it’s mostly done in sign language with subtitles, but when they do talk it sounds authentic to the films. The actors playing the humans are mostly fine as well. There are a couple who get a little bit too dramatic for my tastes, but it didn’t take away from the overall experience.

Gameplay wise as well, it’s just a bit bland. I love interactive story-based games, especially those done by Telltale because you’re given the chance to play as your own character right from the start with multiple dialogue choices and story decisions.

But with Last Frontier, all you’re really faced with are scenarios where you have two emotions to choose from. Which of your children to you back in an argument is one of the first “major” decisions you get. This left me feeling quite underwhelming and took away the a lot from the experience.

This might also have something to do with the fact that you play 14 different characters over a fairly short length. You’re never given enough time to really get to know any of the characters.

As a fan of the new films, I enjoyed how well Last Frontier created that “no heroes or villains, nothing is black or white” style of storytelling. But in the end, I just didn’t feel that connected to anything going on.

I would recommend it to people who enjoy the reboot trilogy, but considering how pricey this game is I can’t see anyone picking it up.